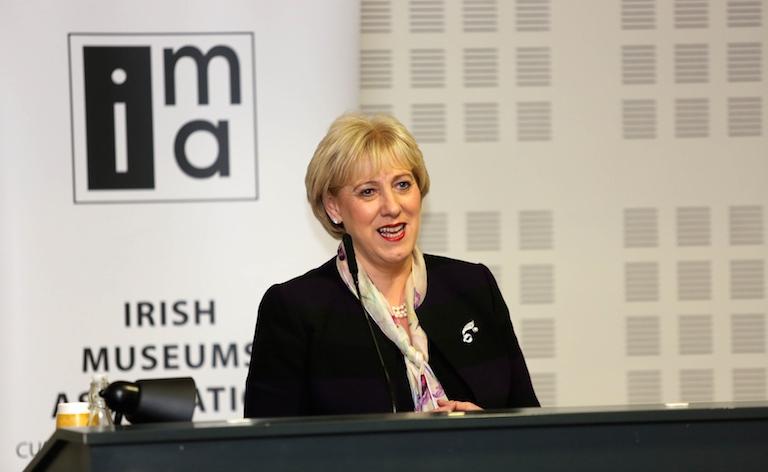 Heather Humphreys TD, Minister for Arts, Heritage, Regional, Rural and Gaeltacht Affairs, said that the government is committed to investing in our cultural heritage as the economy continues to improve.

Minister Humphreys was speaking as she launched the Irish Museums Survey 2016 at the National Library of Ireland.

The survey highlights the increased professionalism in Irish museums, thanks to the introduction of the Museums Standard Programme for Ireland by The Heritage Council, which has had hugely beneficial effects on the sector.

The provision of education and outreach services, digitisation of collections, and computerised collection databases have all increased substantially since 2004. Almost all museums have an online presence and a large majority are actively engaging with social media.

The report also outlines the challenges being faced by our museums, with the effects of the economic recession clearly evidenced since the last report in 2004. Museums have experienced reductions to their budgets and their labour force.

Minister Humphreys said: “This report provides very useful research on the spread of museums right across the country, and underlines the important role which museums play in interpreting, educating and providing enjoyment to all citizens. Our network of museums has been central to this year’s 1916 commemorations, and we now have a great platform to build on for the future.”

Pictured: Heather Humphreys TD, at the launch of the Irish Museums Survey 2016.

“The survey clearly outlines the challenges the museum sector has faced as a result of the economic downturn, which impacted on every publicly funded body. However, I am pleased that I am now in a position to re-invest in our museums, which are such vital educational, cultural and societal resources and I am committed to further investment in our cultural infrastructure as the economy improves.”

“Investing in our cultural heritage is good for communities and good for society. The report also contains important recommendations on increased digitisation and use of social media, which will be essential for the sector going into the future.”

Brian Crowley, Chair of the Irish Museums Association, welcomed the publication of the report: “For many years now, any attempt to discuss the challenges facing Irish museums, or indeed plan for their future, has been seriously hampered by a lack of even the most basic, current data about the sector. This survey gives us the tools to make evidence-based argument both for the importance of museums and the need for increasing the supports available to them.”

Dr Emily Mark-FitzGerald, UCD School of Art History and Cultural Policy and the study’s author said: “This is a young but dynamic sector: around half of Irish museums have been founded since 1990, and in the past few years we’ve seen great expansion in education, outreach, and digital engagement. However, museums are struggling to maintain basic service levels – this is true for both community level museums, and the national cultural institutions.”

“There is also clear need for improvements in basic record-keeping and systems for identifying and supporting the activities of Irish museums, which fall well short of international comparators,” she added.

The full Irish Museum Survey 2016 can be downloaded here.