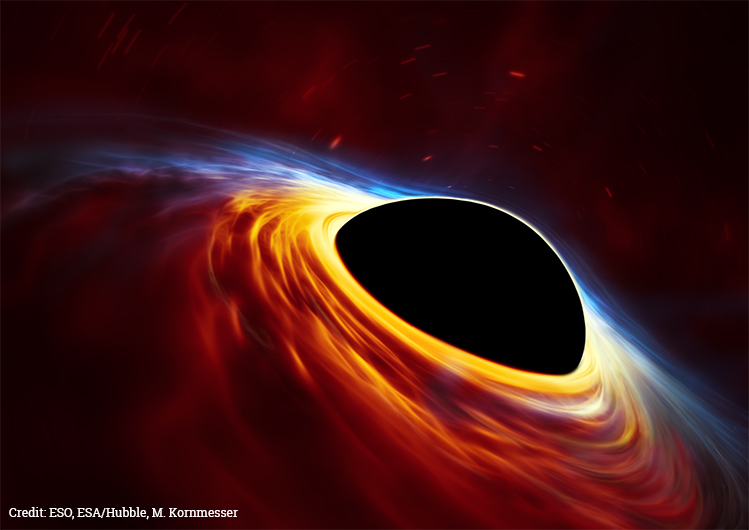 An extraordinarily brilliant point of light seen in a distant galaxy dubbed ASASSN-15lh and thought to be the brightest supernova ever seen has been reclassified as an even more extreme and rare event:  a rapidly spinning black hole ripping apart a passing star that came too close. The new observations are published in the journal Nature Astronomy.

In 2015, the All Sky Automated Survey for SuperNovae (ASAS-SN) detected an event, named ASASSN-15lh, that was recorded as the brightest supernova ever — and categorised as a superluminous supernova, the explosion of an extremely massive star at the end of its life. It was twice as bright as the previous record holder, and at its peak was 20 times brighter than the total light output of the entire Milky Way.

But now, an international team of scientists led by Giorgos Leloudas at the Weizmann Institute of Science, Israel, and the Dark Cosmology Centre, Denmark, and including scientists at University College Dublin, has made additional observations of the distant galaxy, about 4 billion light-years from Earth, where the explosion took place. They propose a new explanation for this extraordinary event.

“We observed the source for 10 months following the event and have concluded that the explanation is unlikely to lie with an extraordinarily bright supernova. Our results indicate that the event was probably caused by a rapidly spinning supermassive black hole as it destroyed a low-mass star,” explains Leloudas.

In this scenario, the extreme gravitational forces of a supermassive black hole, located in the centre of the host galaxy, ripped apart a Sun-like star that wandered too close — a so-called tidal disruption event, something so far only observed about 10 times. In the process, the star was “spaghettified” and shocks in the colliding debris as well as heat generated in accretion led to a burst of light. This gave the event the appearance of a very bright supernova explosion, even though the star would not have become a supernova on its own as it did not have enough mass.

The team based their new conclusions on observations from a selection of telescopes, both on the ground and in space. Among them was the Very Large Telescope at ESO’s Paranal Observatory, the New Technology Telescope at ESO’s La Silla Observatory and the NASA/ESA Hubble Space Telescope. The observations with the NTT were made as part of the Public ESO Spectroscopic Survey of Transient Objects (PESSTO).

“There are several independent aspects to the observations that suggest that this event was indeed a tidal disruption and not a superluminous supernova,” explains co-author Dr Morgan Fraser, Royal Society - Science Foundation Ireland Fellow at University College Dublin.

In particular, the data revealed that the event went through three distinct phases over the 10 months of follow-up observations. These data overall more closely resemble what is expected for a tidal disruption than a superluminous supernova. An observed re-brightening in ultraviolet light as well as a temperature increase further reduce the likelihood of a supernova event. Furthermore, the location of the event — a red, massive and passive galaxy — is not the usual home for a superluminous supernova explosion, which normally occur in blue, star-forming dwarf galaxies.

The mass of the host galaxy implies that the supermassive black hole at its centre has a mass of at least 100 million times that of the Sun. A black hole of this mass would normally be unable to disrupt stars outside of its event horizon — the boundary within which nothing is able to escape its gravitational pull. However, if the black hole is a particular kind that happens to be rapidly spinning — a so-called Kerr black hole — the situation changes and this limit no longer applies.

“Even with all the collected data we cannot say with 100% certainty that the ASASSN-15lh event was a tidal disruption event,” concludes Leloudas. “But it is by far the most likely explanation.”