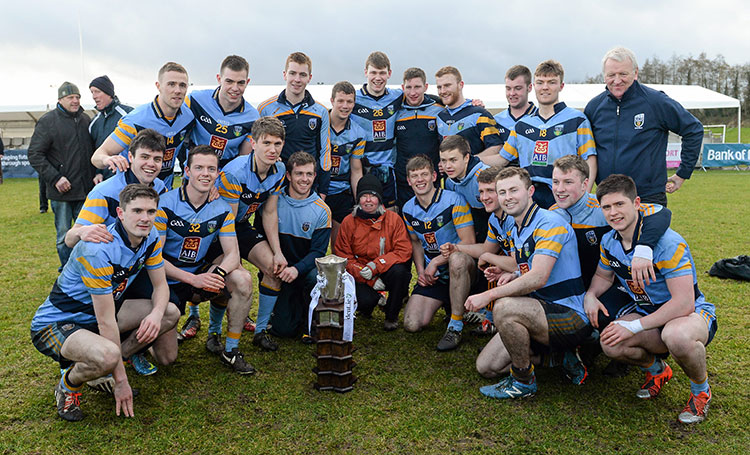 The Belfield outfit won its first GAA intervarsity Gaelic football title since 1996 with a 0-10 to 2-02 win over title holders DCU in wet and windy conditions at the University of Ulster campus in Jordanstown, Co Antrim.

UCD had to overcome the loss of Dublin intercounty star Paul Mannion with a leg injury early on, as well as Player of the Year and Dublin’s Jack McCaffrey with a hamstring near the end of normal time.

Having dominated the game for most of the first half, UCD found themselves a point behind at half time 1-2 to 0-4, after Steven O’Brien scored a goal for DCU in the 30th minute.

Pictured top: The UCD team after they received the Sigerson Cup 2016, at the University of Ulster Jordanstown campus, Co Antrim, where they beat Dublin City University in the final, along with Annette Billings, wife of the late Dave Billings, former UCD GAA coach, who passed away last year. Picture credit: Oliver McVeigh/Sportsfile

UCD re-asserted their authority in the third quarter with four unanswered points. Man of the match and Westmeath forward John Heslin scored three frees and Monaghan’s Conor McCarthy scored his second point, to make it 0-8 to 1-2 after 43 minutes.

DCU failed to get a foothold in the game in the second half, but they got a penalty against the run of play in the 52nd minute. Conor Moynagh put the ball in the back of the net to draw the match level at 2-2 to 0-8.

But Heslin continued his brilliant display, scoring his sixth point in the 56th minute, and Mayo’s Stephen Coen pointed in injury time to secure the hard-fought victory.

UCD’s win was an emotional one due to the passing last year of its long-serving and much-loved GAA officer Dave Billings.

“We didn't use the memory of Dave as motivation at any one point during the year, but he was kind of with us all the way. He always preached about how the Sigerson Cup was about the friendships we'd make, but winning this isn't half bad either,” he said.

Here's how Twitter reacted to the long awaited win:

Report - @UCDGAA have stormed into their first #SigersonCup final since 2003 with a huge win over UL today: https://t.co/SZMTOslrb4 #GAA

Delighted for @UCDGAA Fantastic words and tribute to Dave Billings from @JohnHeslin also. He wouldve been a v proud man today! #SigersonCup

Commiserations to the lads and congrats to @UCDGAA! A great game from both sides. #SigersonCup https://t.co/IRYB2zirIw

Close - but you got it right. UCD beat DCU in the #SigersonCup final 0-10 to 2-02 pic.twitter.com/cCEXUxW1uh

Captain Jack McCaffrey had this to say after the win: