Master's in sport management ranked 23rd in the world 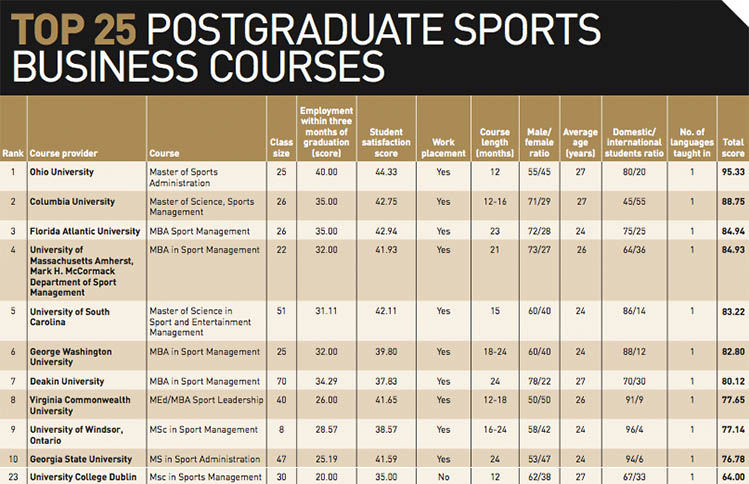 SportBusiness International magazine has ranked the MSc in Sport Management at UCD’s School of Public Health, Physiotherapy and Sports Science 23rd in the world in its list of the top 25 Sport Business postgraduate programmes.

The course scored well in terms of the number of graduates who secured employment in the sector after they had completed the course. Some 50 per cent of graduates gained full-time employment, became self-employed in the sector or registered for a sports-related PhD within 12 weeks of graduating.

The international dimension of the course was also reflected in its score, with 33 per cent of its students in the 2015/2016 academic year coming from overseas, primarily China and the US.

Well known figures, including former Irish rugby international and Leinster player, Bernard Jackman, who is now Director of Rugby at top 14 French rugby side, FC Grenoble, have graduated from the master’s course in recent years.

Commenting on the ranking, Dr James Matthews, Academic Director of the MSc in Sports Management at UCD said: “Like any successful team in sport, we are motivated to do even better; by building on our existing strong foundations and a focus on continuous improvement.”

The rankings, now in their fifth year, attract entries from postgraduate sports management courses around the world. Only postgraduate courses that fully involve the teaching of the business and administration of sport, and have been running for at least three years, are considered.

Each year, course leaders and alumni take part in surveys, which provide the information the magazine uses to score the courses. Alumni are asked whether they secured employment within the sports industry after completing the course, and their views on the quality of teaching.

SportBusiness International is an industry specific magazine that delivers sports news and analysis primarily to businesses whose commercial success depends on their ability to understand the sector.