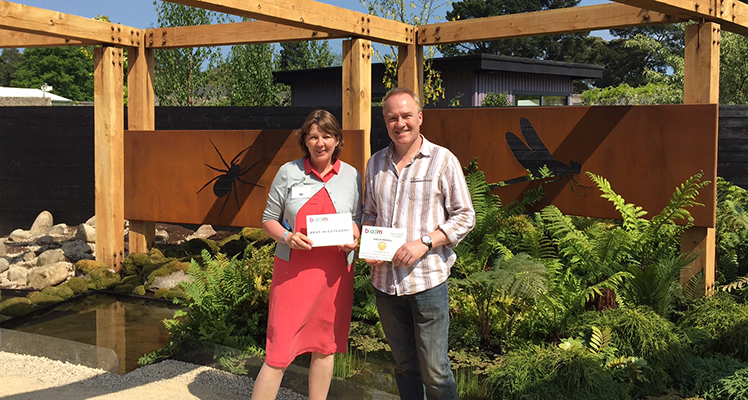 An educational garden project that was created by academics at University College Dublin has won the Gold Medal for Best in Concept category at the Bloom Festival.

The winning ‘UCD Evolution of Land Plants Garden’ project represents the evolution of plants over the 500 million years since they first appeared on earth.

The conceptual design of the project allows visitors to walk through a garden that incorporates a range of plant groups – with almost 2,000 individual species – that represent distinct evolutionary periods.

The garden demonstrates land colonisation by plants that began about half a billion years ago, beginning with algae that moved out of freshwater, followed later by mosses and ferns, and finally flowering plants.

It shows how the evolution of plant life from water to land eventually made land habitable for animals and humans.

Pictured top: Dr Caroline Elliott-Kingston, UCD School of Agriculture and Food Science, and Professor Paul McCabe, UCD School of Biology and Environmental Science, who created the ‘UCD Evolution of Land Plants Garden’ that won the Gold Medal for Best in Concept category at the Bloom Festival at the Phoenix Park, Dublin

Professor Paul McCabe, UCD School of Biology and Environmental Science, originally came up with the concept for the garden. He is also Bloom project leader for the gold-medal-winning garden.

The garden itself was designed by Dr Caroline Elliott-Kingston, UCD School of Agriculture and Food Science, and architect and horticulturist Nicola Haines. UCD sponsored the project.

Initially conceived of as an outdoor classroom, the garden also illustrates how plant evolution coincided with and survived various climate change and mass extinction events of the past.

It aims to drive awareness of the negative consequences of climate change for the global food industry.

Congratulations on beautiful UCD garden at Bloom 2016 looking forward to seeing it again when it come to campus pic.twitter.com/e9pHP2KpUt

After Bloom, the garden will be relocated to the UCD campus and will be used as a resource to teach secondary school students during the UCD Annual Plant Biology Workshop.

The resource will also be used to teach undergraduate courses to demonstrate plant evolution in several science, horticulture and agriculture undergraduate modules at UCD.

“What I’m really excited about is us bringing the garden back on to campus,” said Professor Paul McCabe.

“I want to use it to inspire first-year students to study plant science and try to solve some of these global problems that we have, such as feeding the global population.

“The plants are going to struggle with climate change, so we are doing research in that area to see can we breed better, stronger crops to deal with this.”

“To understand how those crops work you need to understand plant  evolution – how did we get to that point?”

While walking along the internal garden path, key evolutionary developments are explained through the words and images inscribed on a wooden frame, and through representative plants in ponds and on land.

The garden is divided into five sections, beginning with ‘Before Land Plants’, followed by four key innovations in land plant evolution; development of plant cuticle, vascular system, seed and flower.

Bloom, which took place at the Phoenix Park in Dublin, is Ireland’s largest garden festival showcases gardens from the best of Ireland’s landscape gardeners and designers, as well as Irish food producers.