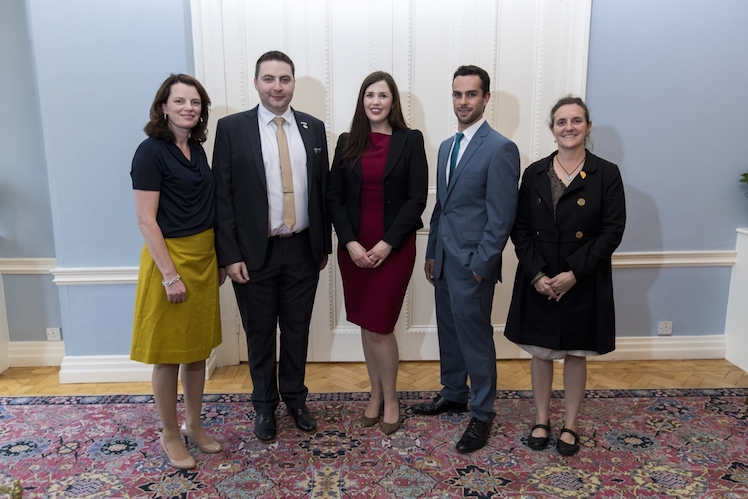 Five UCD scholars have been awarded Fulbright Awards to undertake research and teaching at leading US universities and institutions.

The Fulbright Awards offer Irish and US students, scholars and professionals the opportunity to study, lecture, and research at leading universities and institutions in the US and Ireland respectively.

The Irish and US governments under the Ireland-United States Commission for Educational Exchange fund the award. They were first established in 1957.

The five UCD recipients of the Fulbright awards for 2016/2017 are: Dr Ciara Greene, a College Lecturer in the UCD School of Psychology. As a Fulbright Scholar to Harvard University, Dr Greene will conduct research into the attentional and emotional factors that predict false memory.

Dr Mark Scanlon, a Lecturer in Digital Forensics and Cybercrime at the UCD School of Computer Science. Dr Scanlon will develop techniques for the automated creation and proficiency testing of digital forensic challenges for educational use, as a Fulbright TechImpact Scholar to the Center for Education and Research in Information Assurance and Security at Purdue University.

Professor Helen Lewis, UCD School of Archaeology, an archaeologist excavating prehistoric cave sites in southeast Asia, and a specialist in geoarchaeology. As a Fulbright GSI Geoscience Scholar based at the University of Washington, she will conduct research into the place of geoarchaeology in cultural resources management. Professor Lewis will explore cultures of practice and specifically the barriers that exist at state level to the application of international professional standards of best practice.

Mr Michael Paye, PhD candidate, UCD School of English, Drama and Film. As a Fulbright-NUI student awardee to Princeton University, Mr Paye will complete a study of the correlation between fishery collapse and oil pollution in the literatures of Nigeria and Newfoundland. He will conduct this research to reveal the particular aesthetics and forms through which environmental crisis is coded across the Atlantic fish and oil frontier.

This year €443,000 in funding will enable 39 Irish students, researchers and professionals to study in the US on Fulbright Awards.

“The calibre of Fulbright awardees this year is exceptional, and I know they will thrive as cultural ambassadors in the US and when they return,” said Dr Dara FitzGerald, Director of the Fulbright Commission in Ireland.

“While in the US, they will not only gain knowledge and expertise in their fields, they will also act as ambassadors for Ireland, upholding Senator J. William Fulbright’s wish to expand the boundaries of human wisdom, empathy and perception through education,” said Minister of State Kyne.

The next round of applications for Irish Fulbright Awardees will open on Wednesday, August 31, 2016. Interested applicants from all disciplines are encouraged to visit the Fulbright Commission’s website www.fulbright.ie for more information. Applications for the 2017-2018 academic year will be due on Friday, October 28, 2016.