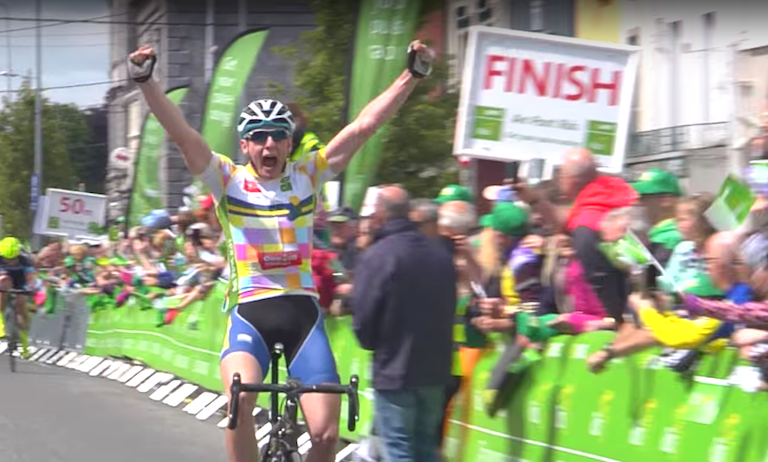 It is the first time since the first race of the 2013 series that an amateur has won a stage of the An Post Rás.

The An Post Rás is Ireland’s main cycling road race and has run every year since 1953. It is Ireland's only race on the UCI Europe Tour.

Morton also retains the King of the Mountains jersey. The jersey is awarded to the best mountain climber over the course of the series.

This was Morton’s first An Post Rás victory but not the first for his family. His father Peter was a stage winner in 1979.

“Speechless. I have no words to describe it,” Morton said. “A lad with a nine-to-five job takes a stage of the Rás. I have to go to work to teach a few kids on Monday. It’s incredible. I’m so happy.”

Morton started with an aggressive strategy and took the lead on three separate occasions. He was caught each time until his final breakaway when he crossed the line four seconds ahead of second place.

Someone remind me. How long has it been since a domestic based rider won a stage of the ras? #AnPostRas

Stage two is the longest day of racing in the eight-race series at 183.7 km. It started in Mullingar, Co Westmeath and finished in Charleville, Co Cork.

There are a total of five UCD-FitzCycles riders competing in the An Post Rás. They are Eoin Morton, Ian Richardson, Paul O'Reilly, Louis Carnec and Jospeh Breheny.

The race series runs every day through until Sunday, May 29.