The Society of Legal Scholars (SLS) has close to 3,000 members consisting primarily of academic lawyers in the UK and Ireland. It was founded in 1908 and is the oldest as well as the largest learned society in the field of law on these islands.

The Society is the principal representative body for legal academics in the UK and Ireland, as well as one of the larger learned societies in arts, humanities and social science. 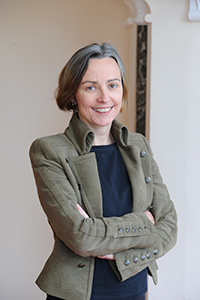 Professor Maher is the Sutherland Full Professor of European Law at University College Dublin. She previously served as the Vice President of the SLS.

Pictured: Professor Imelda Maher has been elected President of the Society of Legal Scholars

This is the first the SLS conference will be held outside the UK. The theme of the conference is "The Diverse Unities of Law". It will explore different legal traditions and how diverse interpretations and practices have emerged between common law jurisdictions.

Implicit within it are notions of codification, the common law as a European legal tradition, the juxtaposition of legal pluralism and classic notions of the unified nature of law and of unity and diversity.

Professor Maher is an expert on the relationship between law and governance, especially in economic spheres. She has published extensively in competition law and also on EU governance.

Before returning to Ireland in 2006, she worked at the London School of Economics; the Research School of Social Sciences, Australian National University; Birkbeck College, University of London; and Warwick University.

A UCD (BCL) graduate, she was general editor of the journal of the Society of Legal Scholars, Legal Studies, from 2012 to 2017, and is a member of the editorial boards of the European Law Journal and the Irish Yearbook of International Law.

Elected as a member of the Royal Irish Academy in 2011, she is currently Secretary for Polite Literature and Antiquities for the Humanities and Social Sciences. Election to the RIA is Ireland’s highest academic honour. She will become Dean of the Sutherland School of Law in September 2017.