Ardent defender of the ability of science to advance the pursuit of human knowledge and inquiry, Professor Susan Haack has been awarded the Ulysses medal by University College Dublin.

Professor Haack received the Ulysees medal in recognition of her outstanding contribution to the arts, in particular, philosophy and law. 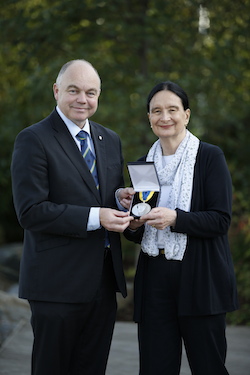 Among her seven published books is her 1998 collection of writings, ‘Manifesto of A Passionate Moderate’. In the essays, Haack rails against the ‘New Cynics’ – including radical feminists and multiculturalists – who disputed the idea of scientific knowledge as worthy of pursuit.

Pictured top: Video of Distinguished Professor Susan Haack, University of Miami, delivering her lecture ‘Science, Yes; Scientism, No’, upon receipt of her Ulysses Medal; Professor Haack receiving the medal from UCD President Professor Andrew J Deeks; and video of Professor Haack’s address to the UCD Philosophical Society on ‘Credulity and Circumspection: Epistemological Character and the Ethics of Belief’

The work challenges the “great revolutionary chorus announcing that disinterested inquiry is impossible…that the concepts of evidence, objectivity, truth are ideological humbug”.

In ‘Defending Science – Within Reason: Between Scientism and Cynicism’, published in 2003, Professor Haack developed her theories in this area further.

She held that the sciences are valuable for the vast body of knowledge they have discovered. But, more importantly, she argued that science is a manifestation of the human talent for inquiry at its best.

“Profesor Haack is also a superb commentator on social cultural and academic affairs. In sparklingly clear and frequently witty prose, Haack shows that, and how, philosophy should engage with issues in the academy and beyond,” said Dr Tim Crowley, Assistant Professor, UCD School of Philosophy.

Arguably her most important contribution to philosophy is ‘Evidence and Inquiry’, published in 1993, in which she outlines the epistemological theory – theory of knowledge – of foundherentism.

Foundherentism is a theory of justification that holds that it is permissible to include the relevance of experience when justifying empirical evidence. It combines elements of two rival theories – foundationalism and coherentism.

More recently Professor Haack has brought her original and distinctive work in the theory of knowledge and philosophy of science to bear on the philosophy of law and real-life legal issues.

In her 2014 book, ‘Evidence Matters Science, Proof, and Truth in the Law’, by providing detailed analyses on a wide variety of legal cases, she attempts to clarify the proper role of scientific evidence and interpretation of standards of proof in the law.

The English academic was included in Peter J. King's ‘One Hundred Philosophers: The Life and Work of the World's Greatest Thinkers’ – one of the handful of living philosophers so honoured.