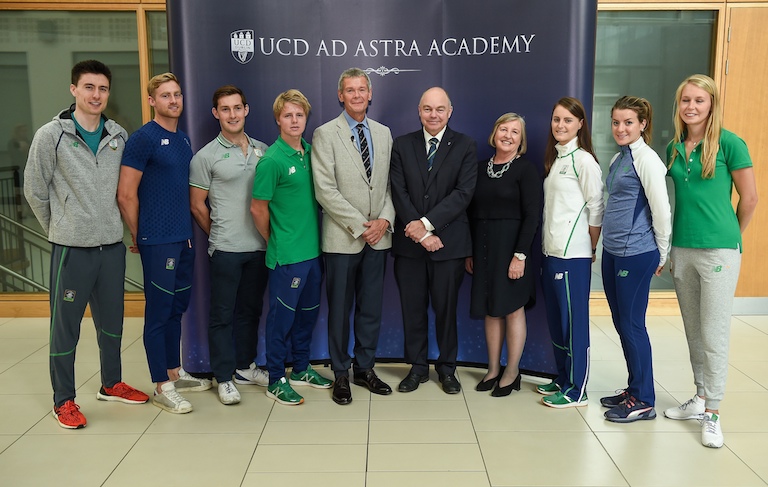 Olympic silver medalist Paul O’Donovan said ambitious words from his dad on his first day of rowing inspired him to success in the double sculls at Rio 2016. 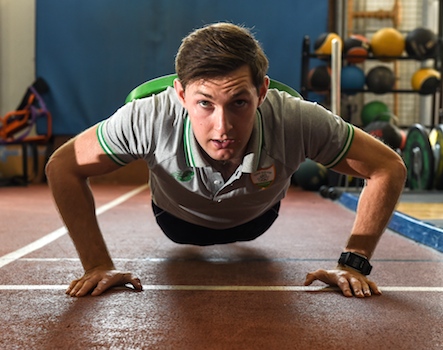 “I was 7 years of age when my dad took me rowing and the first day he said ‘why don’t you try and go to the Olympics?’ and we were stupid enough to listen to him.”

“Since then I’ve really wanted to go. I was playing football or rugby or stuff until I was 13. But then myself, my brother and my friend enjoyed rowing so much we thought ‘if we’re really serious about this Olympic thing we’ll have to give up these other stupid sports!’”

A young boy asks Ciara Mageean: "How hard was doing the Olympics?" 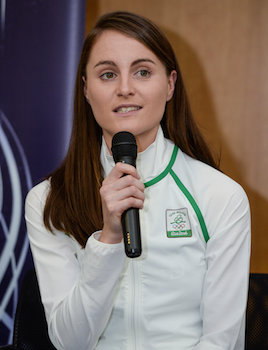 “It was very hard doing the Olympics but I’d say for a lot of the athletes that are sitting here it was the whole build up in getting to the Olympics and getting into the fittest shape of your life.”

“It’s a very, very long and hard road so if you’re interested in any sport, or music, or if you want to do really well in school, I’d say you just have to work really, really hard because all of these athletes here gave up an awful lot to get to where we are right now.”

“I always used to miss birthday parties. I didn’t get to any of my friends' birthday parties even when I was in school because I was always running so for me it was very hard sometimes to miss out on things that were really fun but I think it’s all worth it right now.”

“And personally, I got hurt an awful lot before I got to the Olympics Games. I didn’t get to compete in an Irish vest for five years which is a long time for any athlete but this year I got my first Irish vest on and managed to finish that in an Olympics semi-final. So it’s very hard but believe me all the hard work is worth it.”

Mark English on the Olympic experience and looking to Tokyo 2020 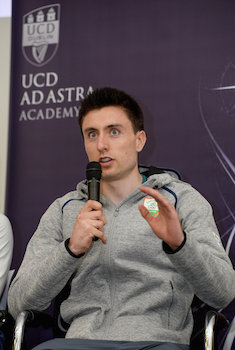 “Dealing with that emotionally was a huge lesson for a lot of the athletes that I’ve talked to so I’ve definitely learned a lot about emotional control. In terms of racing, you learn a lot from the different runners. At an Olympic level, people are inclined to race a bit harder from the gun and they oftentimes don’t actually run the best race themselves because they get caught up in the occasion.”

“But these are little things you only learn with experience. Hopefully in four years time I can go to Tokyo and use all those lessons that I’ve learnt.”

Arthur Lanigan-O’Keeffe on how he became a pentathlete 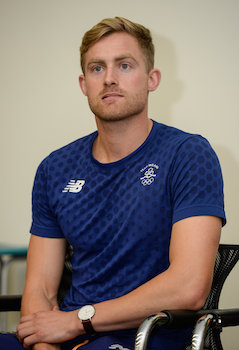 “It’s really random actually. I didn’t wake up one day and decide I wanted to do the modern pentathlon. That just doesn’t really happen. It was just a natural progression.”

“When I was younger I had a lot of difficulties with coordination and I was basically thrown into a pool to try to gain some of that. I went to a school and they were putting loads of money into triathlon and I did some testing and got some good scores there.”

“My mother didn’t want me cycling on roads because she thought I was going to kill myself so she found the nearest sport to that and that was pentathlon. I gave it a go and fell in love with it and ever since then I’ve been hooked.”

“Also, I’m quite hyperactive so I do a lot of things at one time. The fact that I can do five different sessions in one day kind of suits me!”

Claire Lambe on training for the Olympics 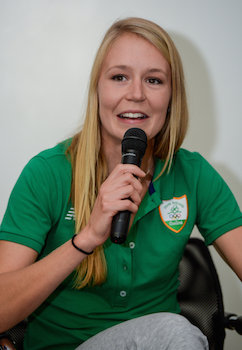 “I graduated from UCD in 2013 so I’ve been pretty much full time since then. I had a small part time job for the last number of years in Cork but I put that completely aside from January this year.”

“For the three months leading up the Olympics we were away for four competetitons and one training camp with Paul (O’Donovan). We were on the same schedule. Everything was pretty much focused towards rowing and the Olympics. In terms of training hours you’re probably doing 4/5 hours a day between weights training, training on water or on the rowing machine.”

“For the Olympics, it’s 24/7 because everything else you do is based around racing at the Olympics. Are you getting the right recovery? Are you eating the right food? Are you going to bed on time? If you do any extra activities, do they jeopardise training the next day?”

“Mentally, it’s 24/7. Well, there’s 8 hours of sleep but then you’re probably dreaming about it.” 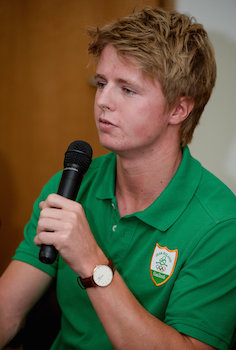 “We’re kind of different in a sense from some other athletes because we’re a team. I’m the youngest on the team and I’m 22. We have people who are 28 who are lawyers, 29 who are accountants and stuff like that so they all have to take sabbaticals and they were getting unpaid leave from work.”

“You apply for funding in October and we were waiting until January to find out [if we were successful]. That’s only eight months out from the Olympics so that’s not a lot of time. We were waiting to see what we got and there were people who weren’t sure if they could get time off from work.”

“When we got our funding budget we were left a quarter of a million euro short from what we thought we needed. Obviously, that created a lot of difficulty so we had to raise that money ourselves. So we did various things to eventually get over the line.”

“Compared to other nations with men’s hockey teams who were competing at the Olympics, 11 are professional and we’re the only ones that aren’t. We are people who are giving up our own time so it’s kind of hard for us in that sense to keep up but then again we’ve constantly punched above our weight in my opinion.”

Mark English on how other sports helped him become an Olympian

“I think for me not specialising too early is a reason I’m still in the sport because maybe I would have burnt out if I had have taken it up sooner.”

“For me, you learn a lot of different skills from other sports. You learn how to lose which is probably the most important thing as an athlete.”

“It depends how you define success but for most people it’s whether you get a medal or whether you win or not but if you define it by those terms you’re going to lose 95% of the time. It teaches you a lot of important lessons to be involved in other sports.”

Ciara Everard on the importance of sport psychology 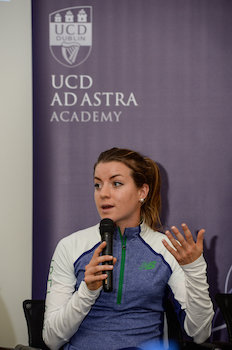 “I think sport psychology is really important. I had an injury leading up to the games and only ran two or three times in the build-up to the games. I had to be really prepared mentally for what to expect out there.”

“I actually think it was a huge benefit that I sought help sport psychology wise. When I went over there I didn’t feel really overwhelmed or shocked or anything by it. I think sport psychology is huge.”

“In my master’s I did my thesis on the sports medical-psychological impact on returning to sport from injury. I think it’s becoming much more acceptable and there’s much more information about it out there. The more information that’s out there for everyone, not just sport psychologists.”

“All medical personnel should have information or training in it. There’s a lot of little things that can be done to maintain a person’s mental fitness. I think in the buildup to the games it can be a very stressful experience for everyone and that everyone can benefit from it.”

Ciara Mageean on how sport improved her studies

“As a student athlete I think that sport doesn’t just benefit life in general but also benefits your academic career. Any year that I haven’t focused on sport my academics has dipped.”

“For me personally I found the drive and determination that my sporting career has developed in me has fed into my academics.”