At the Tech Day event, entitled ‘Technology and Ageing – Innovation for Independence and Innovation’, Kinesis pitched against eight other start-ups working in the ageing technology space from around the world.

The Irish company was declared the overall winner and won €3,900 prize. 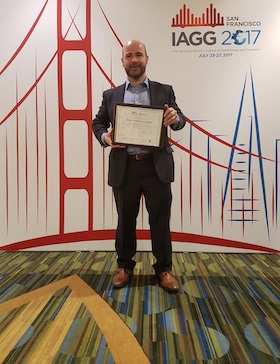 Healthcare professionals use Kinesis QTUG™, a Class I medical device, to identify those patients at risk of falls and prescribe an intervention to prevent them from falling in future.

The device helps doctors to quantify a patient’s response to therapy and rehabilitation and also assesses patients for neurological disorders.

The World Health Organisation estimates that 30% of adults, over 65 years of age, fall at least once each year.

The direct and indirect societal costs of falls among older adults are enormous and in the US alone, such costs have been estimated to be in the region of $20 billion per year.

“This prize provides great recognition for the Kinesis team and provides further external validation of the value and impact of our products to the global ageing care market,” said Seamus Small, CEO and co-founder of Kinesis Health Technologies.

Well done Kinesis, winners of the top award at Tech Day pitch in US https://t.co/dtCtwvYWww via @siliconrepublic

Kinesis was founded in 2013 by Seamus Small and Dr Barry Greene, as a spin-out company from the Technology Research for Independent Living (TRIL) Centre, a large ageing research programme, at UCD.

The company, an Enterprise Ireland High-Potential Start-Up (HPSU), has already secured customers for its products in Ireland, UK, US, Canada and Australia, and has partners in place in India, Japan, Germany and The Netherlands.

Kinesis is headquartered at NexusUCD, the Industry Partnership Centre at UCD.

Last November, Kinesis announced that it had closed its first investment round and secured €590,000 from a consortium of private investors and Enterprise Ireland.

The Tech Day start-up pitching competition was held at the 21st International Association of Gerontology and Geriatrics (IAGG) World Congress in San Francisco.

The World Congress was billed as the as the “largest world conference on ageing”. Over 6,000 experts in the field of ageing gathered together to share their knowledge on improving the health, welfare, and rights of a growing proportion of the world’s population.