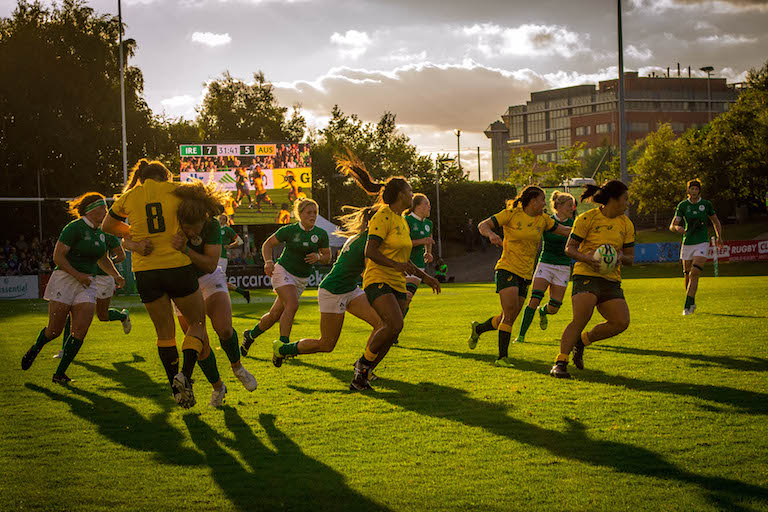 Ireland opened their 2017 Women’s Rugby World Cup campaign with a tightly fought 19-17 win over Australia at the UCD Bowl.

The Irish, who are ranked number five in the world, were first to put points on the board when Larissa Muldoon crossed the line in the 20th minute. Fly-half Nora Stapleton converted to give Ireland a 7-0 lead but Australia replied with a try minutes later.

The score came from 23-year-old debutant Mahalia Murphy. A quick lineout from the Wallaroos led to the ball being swept across the pitch to the rugby sevens regular. Sidestepping Ireland’s number 14, she kept out of distance of the chasing defence to score 28 minutes into her senior international career.

A missed conversion meant Ireland went into the half-time break 7-5 ahead but Australia took the lead in the 58th minute after several impressive carries brought them close to the Irish line. Captain Shannon Parry picked and put the ball down to stun the UCD Bowl. Another missed two-pointer left Ireland only three points behind.

The hosts fought back, retaking the lead with two tries and one conversion in the 62nd and 70th minute. The scorers were indicative of the strength of Ireland’s squad, as second-half replacements Ciara Griffin and Sophie Spence put Ireland 19-10 up going into the final 10 minutes.

An Australian try and conversion with six minutes to go made for a nervous final few minutes for the players and supporters as the sun began to set on University College Dublin.

But that only made the roars louder when Stapleton kicked the ball into touch to end the game and open Ireland's 2017 Women's Rugby World Cup journey with a dramatic win.

"While the girls did a lot of good things, there were areas that we need to tighten up on. We have to do that against Japan," Ireland coach Tom Tierney told RTÉ.

"That’s going to be a different proposition again. We have to be more clinical, especially at the breakdown where physically we were under pressure against the Australians.”

Ireland has two remaining games in Pool C. They first face Japan on Sunday, August 13 (kick-off 17.15) and then take on France on Thursday, August 17 (kick-off 19.45). Both matches will take place in the UCD Bowl.