Former President of the European Central Bank (2003 - 2011), Jean-Claude Trichet has been honoured by the UCD Law Society, University College Dublin.

“This award is in recognition of Jean-Claude Trichet’s extensive career in the public service and his contributions to the European economy,” said Aodhán Peelo the auditor of the UCD Law Society.

Trichet was at the helm of the ECB when the Irish Government announced a bank guarantee in response to the 2008 financial crisis and when the country entered the EU-IMF Economic Adjustment Programme for Ireland (EU-IMF Bailout) in 2010. Ireland exited the programme in 2013.

In April 2015, Trichet addressed the Oireachtas Joint Committee into the Banking Crisis. He said, "I remain convinced that had central banks across the globe in the advanced economies not come together to chart a course out of the crisis, the outcome could have been a repeat, if not worse, of the ‘30s... we had experienced the worst crisis since World War II, could have been the worst crisis since World War I, with a great global depression and not only a global recession."

He added, “The actions taken by the Irish authorities during the programme laid the foundations for the significant and rapid rebound in confidence in the Irish banking system, in the Irish sovereign and in the Irish economy." 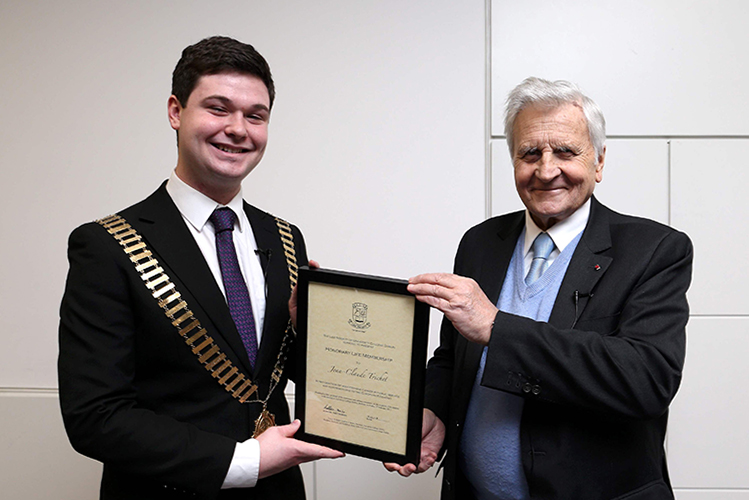 In 2008, Newsweek placed Trichet number five in a list of the “World’s Most Powerful”. In 2011, Time named him one of the most “Influential People of the World”.