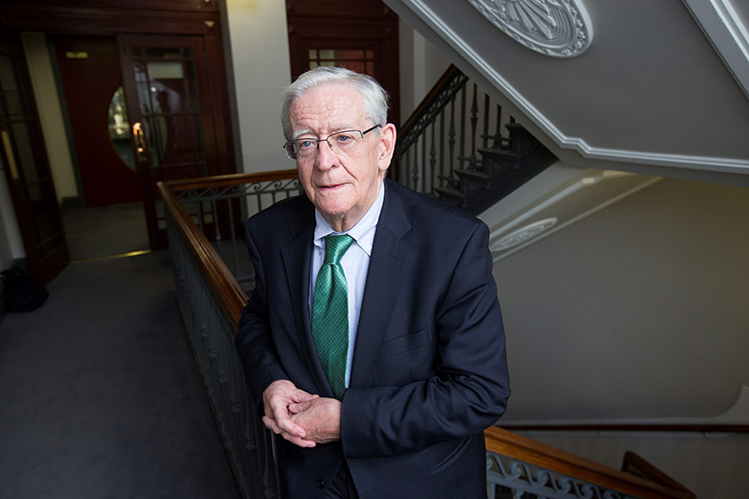 Ronan Fanning joined the Department of Modern Irish History in 1968, having just completed his PhD at Cambridge on the Irish policy of the British Conservative party in the early twentieth century.  The timing was auspicious.  Maureen Wall was beginning to extend the Irish history syllabus to include courses on the war of independence.  Professor Dudley Edwards was embarking on his plans to establish archives at UCD, laying the basis for what was to become the greatest collection of papers relating to independent Ireland held outside the National Archives.  Britain was opening government records more than thirty years old to researchers, and the Northern Ireland crisis was about to erupt.

Ronan’s Cambridge PhD (1968) examined the Irish policy of the British Conservative party in the early twentieth century, and this interest in British policy towards Ireland, and more specifically British policy/attitudes towards Ulster unionism assumed a new relevance after 1969.  From 1968 until he retired in 2006, Ronan introduced thousands of UCD students in theatre L to the complexities of Anglo-Irish relations and the history of Ulster unionism and Northern Ireland.  Smaller groups pored over copies of British official documents, or the diaries and correspondence of Cabinet ministers and senior civil servants.  Many of these students went on to become journalists, senior civil servants, diplomats, politicians and prominent figures in the legal profession, where the understanding that they had gained of Anglo-Irish relations and the value of documentary evidence, proved significant.

In 1970 Charlie Murray, Secretary of the Department of Finance, invited Ronan to write a history of that department, and he was therefore the first outsider to be given access to Irish government records.  The Irish Department of Finance 1922-58, published in 1979 remains a key text for those seeking to understand the government and politics of twentieth-century Ireland.  Having been given such access, it is not surprising that he was to the fore in campaigning to have Irish government records opened to researchers, and here his friendship with then Taoiseach Garret FitzGerald proved a major asset. Ronan served as a member of the first National Archives Advisory Council 1986. Independent Ireland, published in 1983 was the first general history of that period to be based on archival records – and it is still worth consulting.

Ronan’s main interest was always in high politics and diplomacy, and he played a key role in promoting scholarly research into Irish foreign policy, campaigning for the Royal Irish Academy (he was elected was a member in 1989) to establish an International Relations Committee and a journal.  He was also instrumental in the launch of the RIA/Department of Foreign Affairs, Documents in Irish Foreign Policy, serving as an editor for almost twenty years. Volume 10 was published just before Christmas; it was the first launch that Ronan failed to attend. He was also an active member of the editorial board of the Dictionary of Irish Biography.

Ronan’s intellectual and personal range was extremely wide.  Through his columns in the Sunday Independent, his role in promoting twentieth-century history, access to the key resources, the thousands of students that he taught, his influence extended well beyond UCD.  Within UCD he was an active member of the Governing Authority and Finance Committee for many years. Many UCD students will recall his unmistakable voice – which bore traces of his English mother – the occasional hesitation – the well-chosen phrases.  Those wishing to recapture such moments, or those who never heard Ronan’s voice should read Fatal Path. British Government and Irish Revolution, 1912-1922, (2013), Eamon de Valera: A Will to Power (2015), or consult his essay on de Valera or Sean Lemass in the Dictionary of Irish Biography.

Ronan officially retired as Professor of Modern History in June, 2006 and took on the role of director of archive acquisitions for the University until August, 2010.  He continued to take part in college life and most recently contributed to University’s Decade of Centenaries 1916 programme.

He will be sadly missed by his many friends, colleagues, former students and admirers.