Austerity was not main cause of Ireland’s economic recovery, book says

Ireland should not be held up as a success story for economic austerity as its recovery was also driven by other factors that could not be replicated elsewhere, a new book says.

These factors include the export performance of multinational firms trading in international markets; a pragmatic approach to the bailout from Irish policymakers; a lack of political and social dissent to austerity measures and Ireland’s distinctive corporate tax policies.

The book, with 17 chapters from 24 leading academics also highlights the lack of transformative reform and how Ireland remains vulnerable to changes to the forces underlying its recovery.

Austerity and Recovery in Ireland: Europe’s Poster Child and the Great Recession is published by Oxford University Press and edited by professors from University College Dublin. It covers economic, political, social and cultural perspectives on Ireland’s recession experience.

More than 300,000 people lost their jobs during the Great Recession that began in 2008. About 600,000 people left Ireland with approximately half of these being Irish citizens. Suicide rates among men increased and self-harming among both genders also rose.

Ireland was one of the most unequal societies in the Organisation for Economic Co-operation and Development (OECD) before the recession. Decreasing levels of disposable income did not result in a widening of the equality gap but there were significant increases in basic deprivation and consistent poverty. 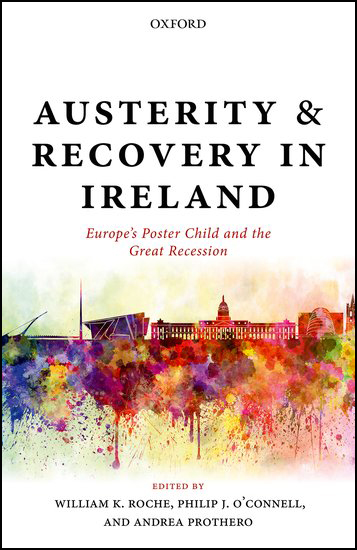 Radical political reforms and structural changes to the public sector did not materialise. Active intervention to assist unemployed was deferred until 2011.

The authors argue that recovery has led to even more dysfunctions within the housing market despite the sector’s contribution to Ireland’s economic collapse. Policies to alleviate housing shortages and escalating costs have also failed.