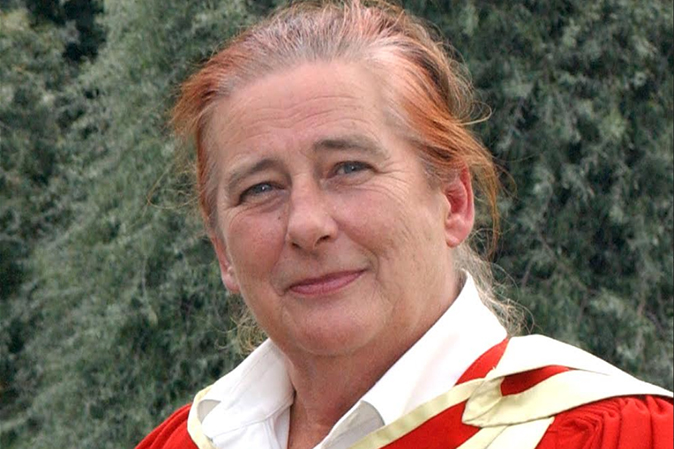 The UCD community is saddened by the death of Dr Caroline Hussey on 11 May 2017.

Caroline Hussey joined the Department of Industrial Microbiology in 1973. A B.Sc from UCD was followed by a Ph.D from Trinity and post doctoral research both there and in Harvard before her return as a lecturer to the university where she had been an undergraduate. She remained a member of that department until her appointment as Registrar in 1994.

Her other main academic interest was in the area of Health and Safety, an interest which led to the initiation of the Diploma in Health and Safety , with the late Peter Start as Director. This contributed to the passage of the first Health, Safety and Welfare at Work Act in 1989.The Minister for Labour responsible for the passage of the act was Ruairi Quinn, for whom Caroline worked as director of elections. A Labour party supporter all her adult life, the skill and experience gained in national politics was also evident in her own campaigns in the academic sphere. Deeply involved in the formation of the Irish Federation of University Teachers (IFUT) she subsequently became its president. First elected by the graduates in 1979, she remained a member of the Governing Body (later, Authority) until 2004 and was also regularly chosen as a member of the Senate of the National University of Ireland (NUI). The experience gained on the Finance Committee under presidents Tom Murphy and Paddy Masterson was an invaluable asset when she was elected registrar and vice-president for academic affairs in 1994.

As registrar, her industry, proficiency and ability to cut quickly to the core of any issue were clear to anyone who encountered her. A rigorous defence of academic standards did not prevent her from offering a sympathetic ear to those who were in difficulty, staff or students. Her concern to improve the student experience culminated in the opening of the student centre, a physical manifestation of her abiding interest in the quality of that experience. Quality assessment procedures for staff became part of the routine of administration and her tactful implementation of them converted many to the belief that their merits could outweigh their shortcomings. As an administrator she was unflappable, undaunted by any crisis or seeming disaster, her ultimate reaction a resigned “This too will pass”. A pioneer in the mainly male world of senior university administration, she was a role model for those who came after.

But her merits as an administrator should not obscure her qualities as a person. In her office those who came to see her found a smiling welcome. The foibles of human nature produced in her a wry amusement, evident in the two novels she published under the pseudonym, H.J. Forrest. She had a wicked sense of humour, all the more striking because it was not revealed too often. And many will remember her mainly for acts of kindness unknown to anyone except themselves.

At a national level her greatest impact was probably as chair of the National Council for Curriculum and Assessment. After her retirement from UCD she was part of a small advisory group to convene the forum on Patronage and Pluralism in the primary sector. Retirement also allowed her to spend more time with her beloved cats, to pursue her interest in bird watching and support her two favourite soccer teams, UCD and Ireland. And she continued to organise the Patrick Finn Lecture series in Haddington Road Church where her funeral mass was celebrated last Monday.

Her relatively sudden death came as a great shock to her family, and their sense of loss will be shared by many friends, colleagues and admirers  throughout the country and beyond.

May she rest in peace.