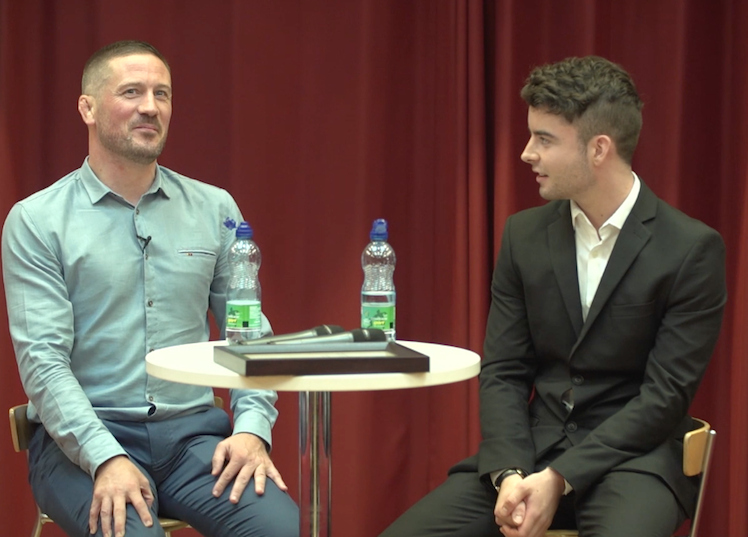 Kavanagh who is regarded as the godfather of Mixed Martial Arts (MMA) in Ireland received the award from the society for his outstanding contributions to sport and business.

The combat sports coach spoke to students at UCD in a question and answer-style interview session before he was presented with the honour.

In August 2017, McGregor fought Mayweather in a professional boxing match in Las Vegas in what was dubbed the “Biggest fight in combat sports history”.

At the time of the fight, McGregor was the two-division Mixed Martial Arts (MMA) world champion and UFC lightweight champion. He lost the contest after Mayweather knocked him out, but the Dubliner defied pundits’ expectations by lasting ten rounds.

The fight was the biggest pay-per-view sporting event of all time with an estimated audience of 200 million viewers.

Pictured top: John Kavangah mixed martial arts coach to combat sports superstar Conor McGregor talks to C&E Society auditor Caelum Rosenkranz in a Q&A style interview at a ceremony honouring him with an Honorary Lifetime Membership Award of the society, and above, a short clip of the interview

Mr McGregor, whose nickname is “Notorious” is one of the few combat sports stars to cross over and compete in other combat sports.

At the award ceremony in UCD, Kavanagh was also asked by C&E Society auditor, Caelum Rosenkranz, whether he thought McGregor would ever fight in the hugely popular WWE (World Wrestling Entertainment) flagship event, Wrestlemania.

Great to accept the Arthur Guinness Award & Honorary Life Membership of The Commerce & Economics Society for achievements in sport and business from @caaelum and @ucdcesoc. @thenotoriousmma accepted the same award four short years ago!

“He is only going to do things that really fire him up and…who knows: I am behind him with a megaphone in six months time, you're like “Oh you said you’d never do it, and we’re both slamming people with steel chairs,” he joked.

Following the award ceremony at UCD, it was widely reported that Mr McGregor was in talks with the WWE to sign a lucrative deal to make a once-off appearance against one of its biggest stars in its 2018 Wrestlemania event.

Mr Kavanagh also told UCD students how his involvement in combat sports led to him opening a mixed martial arts gym in Dublin after he had completed his degree in Engineering at the DIT in Bolton Street.

His brother James Kavanagh, who is best known for his large following and comedic posts on social media platform Snapchat was also present at the award-giving ceremony.

He is now head of Straight Blast Gym Ireland, which is Ireland’s largest martial arts gym and training facility.