In one of the liveliest weeks on campus with thousands of visitors attending graduation ceremonies and celebrating the academic achievements of their loved ones and friends, the University also presented honorary degrees to five individuals who have attained outstanding distinction in their fields.

Niall McLaughlin is a multiple international award-winning architect. He is also Professor of Architectural Practice at University College London.

McLaughlin won the Young Architect of the Year award 1998, 16 RIBA Awards, he twice won the RIBA Stephen Lawrence Award, had two appearances on the Stirling Prize shortlist and one on the Mies Van Der Rohe Prize shortlist.

He was awarded the RIBA Charles Jencks award in 2016. The award is presented annually to an outstanding architect or practice that ‘has recently made a major contribution to both the theory and practice of architecture’. 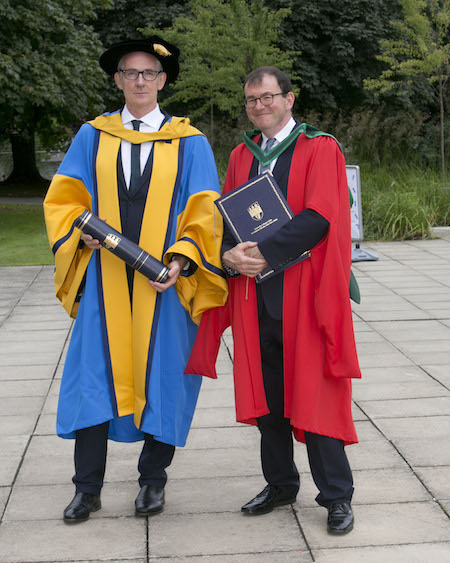 McLaughlin has been continuously involved in teaching architectural design since his earliest years in practice, initially at Oxford Brookes. For more than 20 years, he has also taught at the Bartlett, University College London, where, since 2015, he has been Professor of Architectural Practice.

“As anyone who has heard him speak will know, Niall is an extraordinary lecturer and presenter,” read Professor Hugh Campbell, UCD School Of Architecture, Planning And Environmental Policy, at the conferring ceremony.

McLaughlin has designed a number of projects in Ireland including the award-winning Alzheimers Centre in Blackrock.

Last year, it formed the basis for the exhibition Entitled Losing Myself, staged by McLaughlin and his teaching partner Yeoryia Manolopoudou, as Ireland’s pavilion at the Venice Biennale.

“Vivid, is, in fact, a word which seems to be most apposite in relation to Niall’s architecture, and of his teaching and writing. Deriving from the Latin vividus, meaning alive, spirited, lively - my thesaurus tells me - the word’s synonyms include eloquent, expressive, lucid, meaningful, memorable. All of which seem fitting.”

Niall MacMonagle has worked as a teacher and broadcaster but is best known as a poetry anthologist.

In the early 1980s, he began his teaching career at Wesley College, Dublin, where he taught English for over 30 years.

“Adjectives eagerly provided by his former students testify to his passion, dedication, compassion and generosity; his infectious enthusiasm for the Arts, his creative and inspiring role as educator; to quote one student, ‘simply beloved’,” read Professor Margaret Kelleher, UCD School Of English, Drama And Film, in her citation at the conferring ceremony. 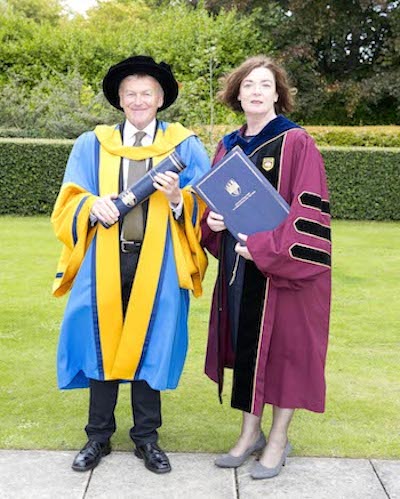 MacMonagle’s qualities as a teacher quickly moved to national and international arenas with his development in the mid-1980s of the Lifelines Project: Letters from Famous People about their Favourite Poem. This project now spans four volumes; the New and Collected Lifelines was published in 2010.

His anthologies of poetry have influenced countless Irish second-level students of literature through textbooks such as Poetry Now, which he has edited annually since 2002, and the transition year textbook called Text.

He also gained an immense public readership through collections such as Real Cool: Poems to grow up with, Outside In: Stories to grow up with, The Open Door Book Of Poetry, and Slow Time: 100 poems to take you there.

His most recent collection, the acclaimed anthology Windharp, provides poems for each year of the century 1916 to 2015.

“In conferring on him this honorary doctorate, we salute, in esteem and with gratitude, the work of Niall MacMonagle as advocate for the arts and champion for poetry, his exemplary teaching legacy, and his continuing work as educator and inspirer of legions of readers.”

An Irish diplomat who was centrally involved in the negotiations for the Irish government during the peace process, David Donoghue has also had overseas diplomatic postings in New York, Rome, Bonn, Paris, Moscow, Vienna and Berlin.

“David Donoghue set off to build agreements, declarations and new institutions to ensure peace and sustainable development on the Island of Ireland and indeed the world,” read Professor Patrick Paul Walsh, UCD School Of Politics And International Relations, in his citation at the conferring ceremony.

David Donoghue graduated from UCD with a BA in Modern Languages and a MA in German Language and Literature in the early 1970s. 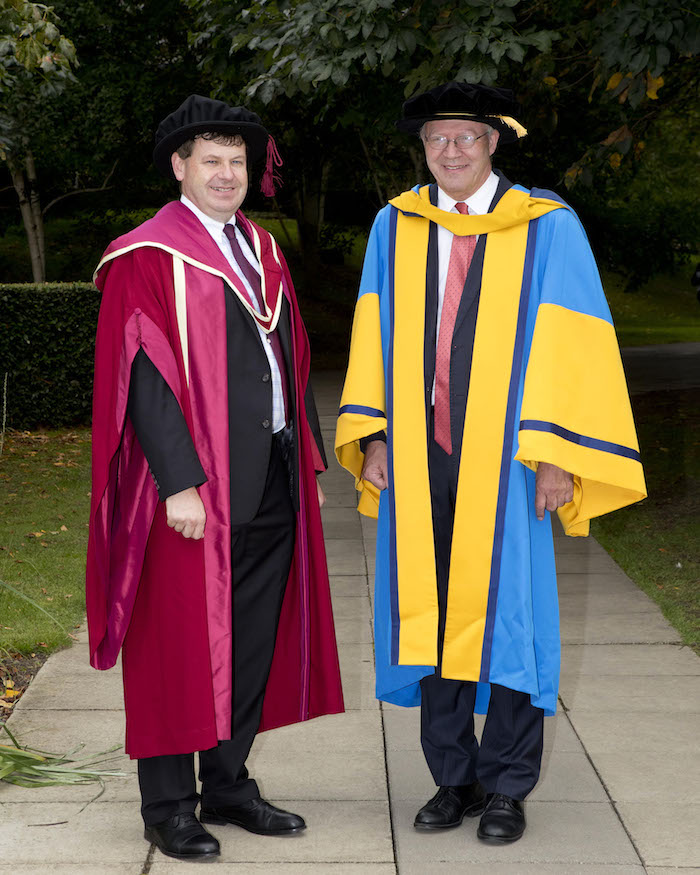 He served as the Irish head of the Anglo-Irish Secretariat in Belfast during the period 1995 to 1999. It was in this capacity as a negotiator for the Irish government that he was centrally involved in the talks that culminated in the historic Good Friday Agreement in 1998.

He went on to become the Irish Ambassador to the Russian Federation from 1999-2001, coinciding with Vladimir Putin’s initial ascent to power. In 2001, he returned to Dublin as Director-General of the Irish government foreign aid organisation, Irish Aid.

In September 2013, he took up duty as Ireland’s Permanent Representative to the United Nations in New York.

In 2014, he was appointed co-facilitator, with the Ambassador of Kenya, for intergovernmental negotiations which led to the adoption of the groundbreaking UN 2030 Agenda for Sustainable Development in September 2015.

In 2016, he served as co-facilitator, with the Ambassador of Jordan, for negotiations which produced a landmark agreement, called the “New York Declaration for Refugees and Migrants” on a wide set of issues relating to the protection of refugees and migrants.

Sir Ciarán Devane started his career as an engineer but has more recently worked as the Chief Executive of one of the largest charities and a public sector cultural body in the UK.

Having graduated from UCD with a 1st class Honours Degree in Biochemical Engineering, Sir Ciarán took up an engineering position with one of the UK’s largest companies, Imperial Chemical Industries (ICI), rising to a management-level position over his eight-year period there.

In 1992, he left ICI to practise as an engineering consultant, principally for Gemini Consulting. 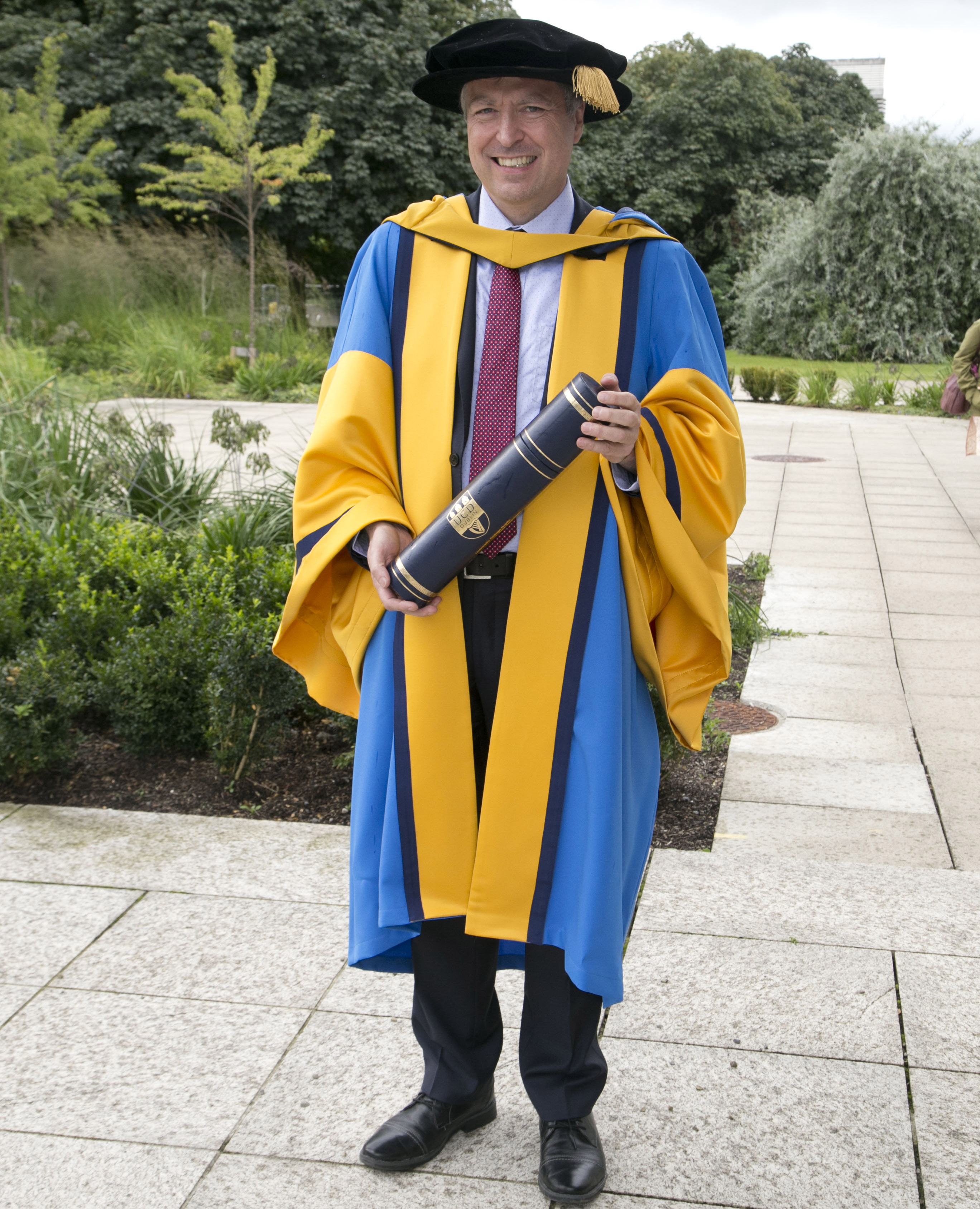 Personal tragedy struck when his wife, Katy, died from cancer in 2003. For the last three years of Katy’s life, until she died in 2003, Sir Ciarán dedicated himself to her full-time care, putting his career on hold.

He accepted the role as Chief Executive of Macmillan Cancer Support in 2007.The charity is one of the largest in the UK and provides healthcare information, support and financial assistance to millions of cancer sufferers across Britain.

“During his time in Macmillan (2007-2014), Ciarán transformed the effectiveness of the organisation, not just in terms of remarkable growth in income and extension and improvement of services to cancer sufferers, but by crucially doing the little things better,” read Professor Eoin Casey, UCD School of Chemical and Bioprocess Engineering, in his citation at the conferring ceremony.

In recognition “For services to Cancer Patients” Ciarán was awarded a Knighthood in 2015. In January of 2015, he was appointed Chief Executive of the British Council.

The organisation manages a budget of £980m, spent on a diverse range of cultural and artistic projects.

“Alistair is an outstanding scientist and has made a number of internationally important discoveries that underpin our current understanding of cell signalling in plants,” read Associate Professor Paul McCabe, UCD School Of Biology And Environmental Science, from his citation at the conferring ceremony.

After graduating from the University of St Andrews with a degree in Botany and a PhD in the area of physiological ecology, he moved to the University of Edinburgh, to work on cell biology as a postdoctoral scientist.

In 2006, he moved to the University of Bristol to take up the Melville Wills Chair of Botany. 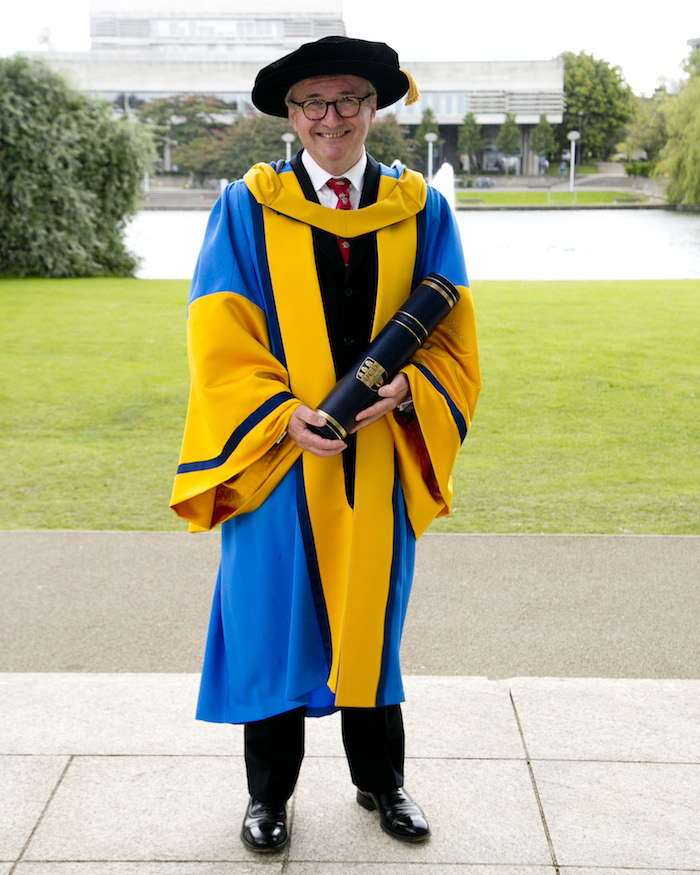 In recognition of his outstanding abilities as a scientist, he joined the Scientific Advisory Committee of the UK Department of Environment Food and Rural Affairs and has advised the work of the Scottish government.

The respect he is held in by his international colleagues is reflected in the fact that he has been appointed external examiner for 13 degree programmes at a number of leading universities – including UCD, Cambridge, Oxford, Bristol, Durham, Dundee, and York.

“I have seen first-hand the dedication he puts into these roles, the care and regard he has for our students, and his absolute determination, that we do everything we can to bring out the very best in our graduates.”