Former US President Bill Clinton delivered a keynote speech at University College Dublin to mark the 20th anniversary of the Good Friday Agreement.

He told the audience that he “first became captivated by the struggles of Northern Ireland” while a student at Oxford University in 1969.

“It was there that I came to understand the nature of the grievances; the political, economic, social and deeply personal psychological dimensions of the conflict,” he said.

With Irish roots on his mother’s side, he wanted to see the troubles to come to an end someday.

He continued to tell the audience that over two decades later, in 1992, shortly before the New York Primary, he attended a community meeting for all the candidates for the democratic nomination.

“They were very insistent that they wanted a personal commitment from a candidate to get involved in the Irish peace process and a personal willingness to appoint a special envoy to advance that process,” he explained.

“Their position was simple” he said. “The Irish American diaspora had Catholics and Protestants who were both interested in an end to the conflict”.

“No previous President had done it - even President Kennedy - because they were under enormous pressure to stay out of it because that’s what the British wanted us to do. And we had what was known as a special relationship with the UK, which we had and have, and which is profoundly important to us.”

According to Clinton, this became part of his political campaign for the democratic nomination in the New York Primary in 1992.

Returning to describing the later peace process in Northern Ireland, he said, “the real credit for this peace belongs to the leaders who made the decisions along the way.”

“To Bertie Ahern and Tony Blair, and before them John Major and Albert Reynolds and John Bruton, to David Trimble, John Hume, Gerry Adams and many others, and to those who came after including something I never would have believed, Ian Paisley and Martin McGuinness.”

“To the women’s groups who spoke out early and constantly. And to the young people who wrote and plead and spoke for peace,” he continued.

Clinton went on to explain how “these deals require sacrifice and compromise”. “It’s never easy and it’s not free,” he said.

He told the audience how David Trimble and John Hume knew perfectly well that they were putting their political parties at risk through the peace process, and that “they did it for the young people and for the future”. 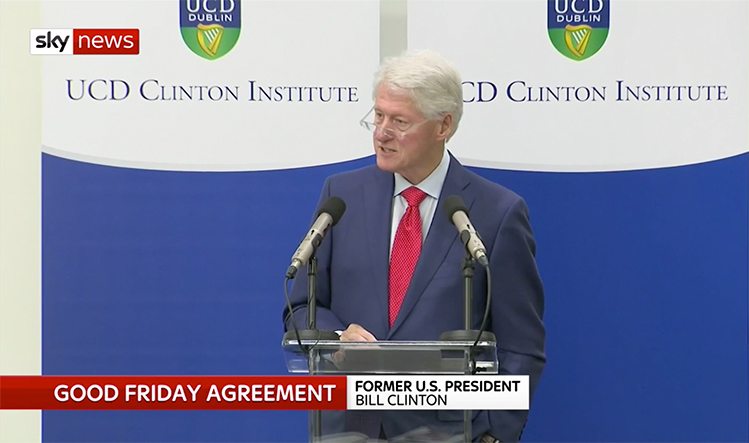 He went on to credit George Mitchell, the former US Senate Majority Leader (1989 – 1995) and US Federal Judge, who was President Clinton’s peace envoy to Northern Ireland (1995) and served as the Independent Chairman of the Northern Ireland Peace Talks (1996 – 2000), under whose leadership the historic Good Friday Agreement was agreed by the governments of Ireland and the United Kingdom and the political parties of Northern Ireland ending decades of conflict.

“But the ultimate credit still belongs to ordinary citizens, because this had to be voted on,” he said. “Keep in mind, it was only six weeks after the agreement that there was a referendum in the Irish Republic and in Northern Ireland.”

He told the audience that the genius of the Good Friday Accord to him was that it was about “real democracy not just majority rule, but minority rights, individual rights, the rule of law and the absence of violence”.

“I think this is profoundly important,” he said.

“The negotiators came up with a brilliant system of shared decision-making, shared economic benefits, shared political and social benefits, and special ties to the Irish Republic as well as to the UK.”

“There had never been an agreement quite like it before,” he said.

“When it happened, people around the world had to stop and think, well I don’t want my kids to grow up with all this violence either.”

He continued, “so, we should be very grateful first that this peace has held... that none of the parties ever questioned the idea that it had to be approved by a referendum and that it had to be accompanied by regular elections in the normal course of business”.

“Because if you look around the world today, you can see that it’s a fool’s errand to assume that democracy will always be around, that it can’t be lost,” he added.

In May 2001, the Government of Ireland recommended that an Institute for American Studies be established in Ireland and named for the 42nd President of the United State, President William Jefferson Clinton, in recognition of his role both personally, as well as those of the United States Government, Congress and people, in the Irish Peace Process.

University College Dublin was successful in the competition for the institute and the UCD Clinton Institute for American Studies was established on its Belfield Campus in Dublin, Ireland.