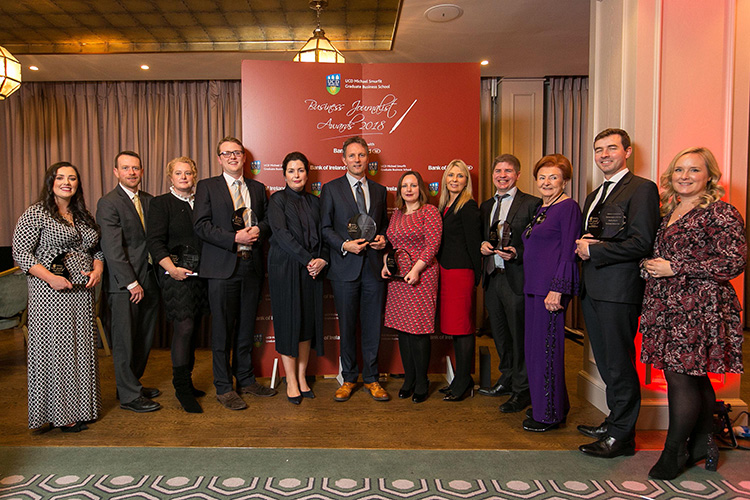 The ten journalists recognised for excellence at the UCD Smurfit School Business Journalist Awards 2018, alongside Breege O’Donoghue, Chair of Design and Craft Council of Ireland, and Francesca McDonagh, Group CEO of the awards sponsor, Bank of Ireland

The awards, which recognise excellence in business journalism in print, broadcast and online formats are run in conjunction with the Business Journalists Association of Ireland.

The winners of the six categories for 2018 were:

He was recognised in particular for his reporting on key events in Europe and how they impact on economic affairs, business and society.

Thrilled and humbled to win the Outstanding Achievement Award at the UCD Gaduate School Journalism #SmurfitAwards for coverage of Brexit. Big thanks to @rtenews and @SmurfitSchool pic.twitter.com/LpxGyflHZi

In presenting the award to the RTÉ journalist, Breege O'Donoghue, Chair of the panel of judges, spoke of his ability to quickly digest the geo-political complexities of rapidly changing events such as the financial crisis and, more recently, Brexit.

She said Mr Connelly made such stories both comprehensible and vivid, incorporating human interest as a way of communicating the impact these events will have on business, economic affairs and society in this country and elsewhere. 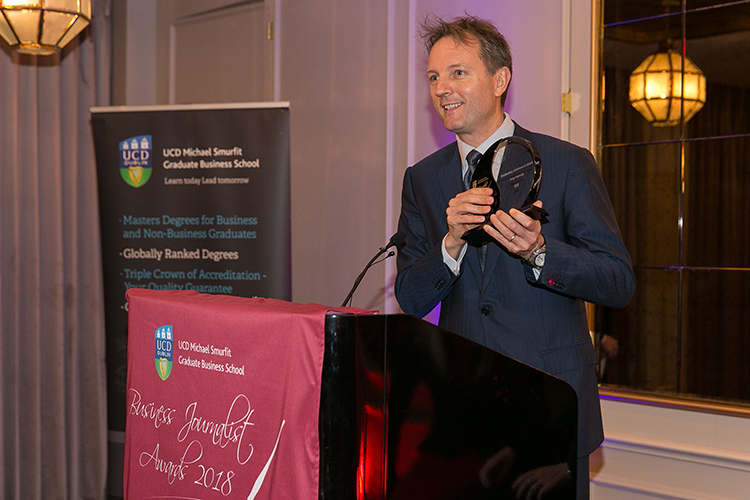 Professor Anthony Brabazon, Dean, UCD College of Business, said: “[At] the Smurfit School we seek to acknowledge the very best of business journalism; work which enriches the public’s understanding of critical issues of the day and how they impact business and society.

Francesca McDonagh, Group CEO of the awards sponsor, Bank of Ireland added: “The range of categories and the breadth of subject matter dealt with in the winning entries demonstrates clearly the versatility and capability of Irish business journalists who, irrespective of broadcast or publication format, deliver extensive reporting at the highest standard consistently."