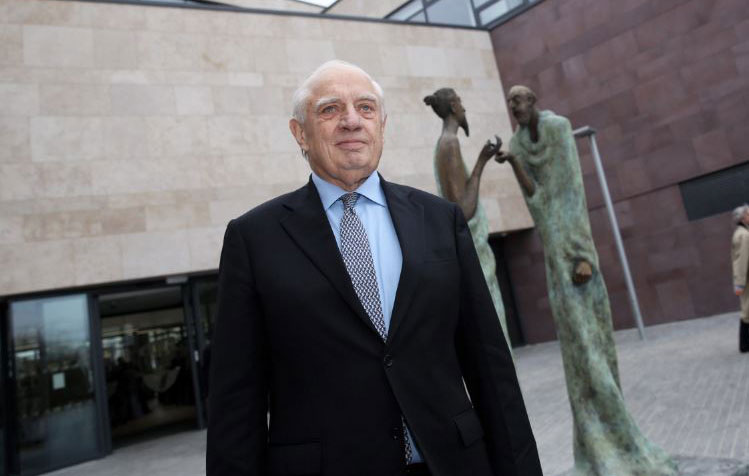 It is with deep sadness that the UCD community marks the passing of Peter Sutherland today.

Peter Sutherland SC, who has died today, was an alumnus of UCD and a great friend and supporter of the University throughout his life. Peter completed his secondary education at Gonzaga College prior to studying law at UCD. He played rugby at a high level during both second and third level studies and captained the UCD First XV. He was called to the Bar in 1968 and also tutored tort law in UCD. He was the youngest Attorney General when he was appointed in 1981 and was subsequently the youngest ever European Commissioner when appointed in 1985 where he was first Commissioner for Social Affairs and Education and then Competition.  ln 1985 he proposed the creation of the Erasmus Programme to facilitate student mobility within the EU.  He later was heard to describe this as his greatest achievement. More than nine million students benefited from travel to study in another country during the first thirty years of the programme. After stepping down from the Commission, he chaired the High Level Group on the Operation of the Internal Market in the European Union, giving his name to the final report, published in 1992, which was extremely influential in advancing economic integration within the European Union.

He was Director General of GATT between 1993 and 1995 and then the first Director General of its successor, the World Trade Organisation, taking a lead in establishing both the institutional and substantive arrangements for the governance of global trade.   He retained a keen interest in European affairs and was Chairman of the European Institute for Public Administration from 1991 to 1996. Amongst his commercial activities he was chairman of AIB from 1989 until 1993 and was subsequently non-executive Chairman both of Goldman Sachs International (1995-2015) and of BP (1997-2009). In the charitable sphere he was Chair of the Ireland Fund of Great Britain from 2001-2009. Between 2008 and 20015 he was Chair of the Court of Governors of the London School of Economics and in 2006 he was appointed Special Representative of the Secretary General of the United Nations for Migration. He applied himself to the UN role with great energy and humanity, requiring global leaders to address challenging issues around migration.

Peter Sutherland was awarded the inaugural UCD Foundation Day Medal in 2004 on the 150th anniversary of the University.  He received sixteen honorary doctorates, was a member of the Royal Irish Academy and other awards include an honorary Knighthood (UK 2004), a Chevalier of the Legion d’Honneur (France), a Papal Knighthood of Saint Gregory, the Gold Medal of the European Parliament (1988), the first European Law Prize (Paris 1988), The David Rockefeller International Leadership Award (1998) and the Robert Schuman Medal for his work for European Integration.

Peter Sutherland was a great friend of UCD, unstinting in his support and advice to successive Presidents, Deans of Law and many others. He was a member of the UCD President’s Advisory Board, of the UCD School of Law Development Council and of the UCD Smurfit School of Business Advisory Board. He launched the UCD Dublin European Institute in 2000 and lectured on one of their new graduate programmes. His generosity led to the establishment of the Sutherland Chair in European Law in 2005 and subsequently his leadership gift was central to the realization of the new School of Law building, which he officially opened in November 2013. Peter reluctantly agreed to the proposal made by then President of UCD, Dr Hugh Brady, that the magnificent new building should be known as UCD Sutherland School of Law.

In an interview published in UCD Connections in 2010 Peter Sutherland was asked what he hoped his legacy would be.  His answer was “that I was a good father.”  To his loving family there is no doubt that he was that – and more.  To those who benefitted from his counsel, his intellect, his humanity, his generosity and his friendship, he was a wonderful person and we are proud to have known him.