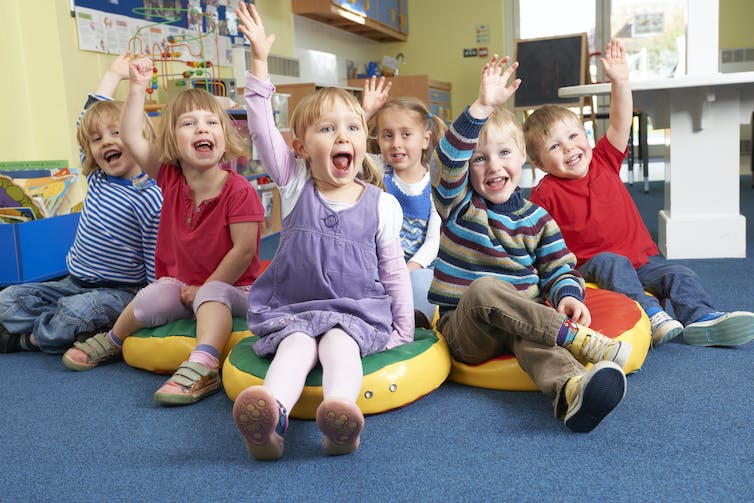 Teach children to manage their emotions and they may reap the benefits in improved school grades. SpeedKingz/Shutterstock

It is understood that childrens’ emotions in school are connected to their learning and academic achievement. The evolution of concepts such as emotional intelligence explain why the ability to recognise, use, express and manage one’s emotions makes a huge difference to success in later life. As the American author and philosopher Walker Percy said, “You can get all As and still flunk life.”

Schools wishing to teach students these non-cognitive skills, such as self-awareness, self-control, empathy, decision making and coping, have turned to social and emotional learning (SEL) programmes. In the US, UK and Ireland, these are recommended as ways for schools to teach these “soft skills”.

But there are a large and growing number of SEL programmes offered to schools. Typically, these programmes concentrate on managing emotions, setting positive goals, and increasing social and self-awareness. Relationship skills and decision making may also be included. While they vary in scope, the programmes tend to include both elements for developing teachers’ professional competencies and classroom-based activities for students. But do they work?

With funding from the Jacobs Foundation, my team and I conducted a systematic review of research looking at SEL programmes, drawing upon studies conducted over 50 years and including children from pre-school to grade 12 (around age 17-18). The review analysed the effects of social and emotional learning programmes in schools on achievement in three subjects: reading (57,755 pupils), mathematics (61,360 pupils), and science (16,380 pupils), selecting only the 40 most methodologically rigorous studies.

While we found evidence that the SEL programmes improved the children’s performance in these subjects, the effects of the different approaches varied widely. There was great disparity in the quality of the studies, and it appears that different study designs may produce different results – for example when comparing quasi-experimental studies to randomised controlled studies. There is also evidence that some of the approaches to teaching SEL that have become popular over the last few decades might not be as effective as policymakers and schools may believe.

Using a similar approach proposed by education psychologist Robert Slavin of Johns Hopkins University, programmes were ranked according to the strength of evidence of effectiveness, balancing for factors such as the studies’ methodological quality. In the table below, we’ve rated the evidence strong (3), limited (2), insufficient (1), or that no studies qualified for this review (0). Two programmes used composite, cross-subject scores. 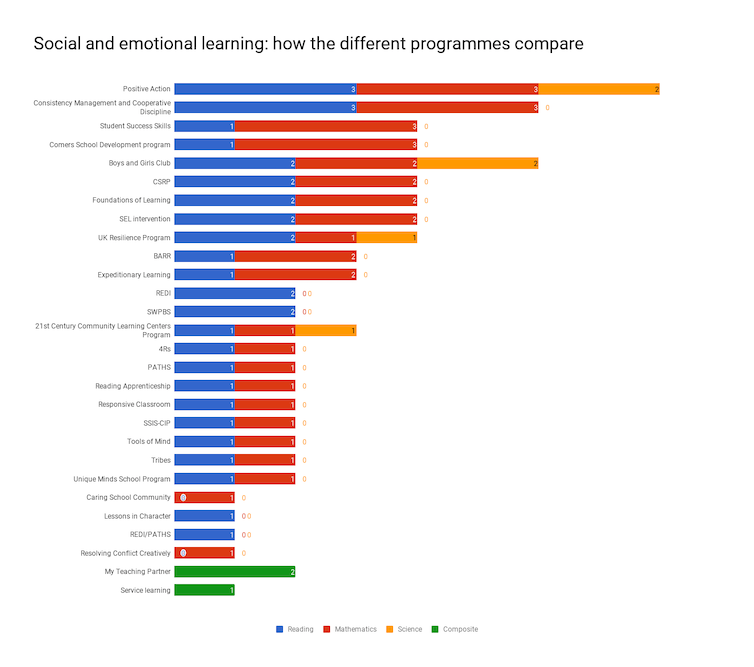 Developed at the University of Houston, Consistency Management and Cooperative Discipline (CMCD) also scored well. Averaging across the two studies of CMCD that involved 1,287 students, the mean effect size was +0.43 for reading and +0.46 for mathematics.

Other programmes also rated strongly for mathematics. The four included evaluations of Student Success Skills, involving 1,248 students, had a mean effect size of +0.30 for mathematics and +0.12 for reading. The two included evaluations of the Comers School Development programme, developed at Yale University, had a +0.27 mean effect size from 14,083 students.

A number of programmes were not included in our review, such as Lions Quests, Incredible Years, Open Circle and FRIENDS, because all the studies of these programmes contained methodological limitations such as a lack of control group or detailed academic outcomes. Their absence is not evidence that they don’t work, but considering how widely used these programmes are in schools throughout Europe and the US, the lack of high quality research to ascertain their effectiveness in improving academic achievement is surprising.

The effects of poverty on learning

I have studied schools in areas of high poverty in an effort to better understand how to improve students’ reading, mathematics and science achievement. Despite the challenges that high-needs pupils face many did achieve good academic results, and they were led to believe that it was effort, instead of ability, that determined their success. They tended to have developed grit and self-control. These children learned how to manage their emotions, and so did their teachers. However, more high quality research is needed to understand the SEL interventions that work best – particularly for students from low-income and minority families, and based on schools outside the US, where the majority of these studies were conducted.

Many of the studies we came across focused on using social and emotional learning for non-academic aims – for example, to reduce bullying among students – and this is an area that we will be looking at in our next review. But what’s clear from the current review is that teaching these cognitive “soft skills” shouldn’t be seen as something beyond academic achievement, but in fact a technique that may provide both a boost to academic results at school, and the important social and emotional literacy required to succeed in adulthood.

If we can agree that these programmes lead to benefits, then the next stage is to ensure that there is enough evidence-based research to identify which approaches to teaching SEL work, in order to help schools choose the best programmes for their students.