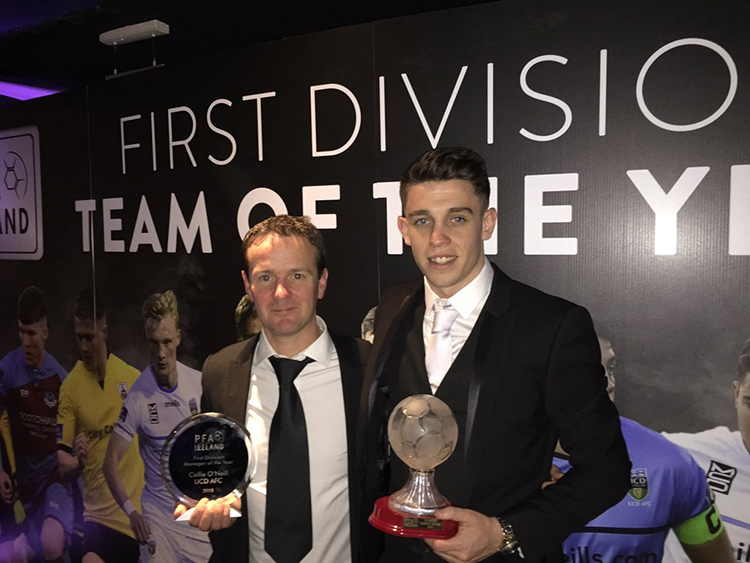 Manager Collie O’Neill was named First Division Manager of the Year by the Professional Footballers Association of Ireland (PFAI), while captain Gary O’Neill took the division’s Player of the Year award.

The O’Neills, who are not related, were central to the Students’ successful 2018 season, which saw them returned to the Premier Division for the first time since being relegated in 2014.

Drogheda native Collie O’Neill took the reins at UCD following this, and has overseen promotion challenges in each year since.

In 2015, he led the club into the UEFA Europa League qualifying rounds; upsetting the odds to beat professional Luxembourgian side F91 Dudelange on away goals.

“Since taking over in 214, Collie has done an exceptional job, leading us into our Europa League campaign in 2015, and now the First Division title and promotion back to the Premier Division,” said UCD AFC.

Congratulations to Gary O'Neill from @UCDAFC on winning this year's First Division Player of the Year Award #PFAIrelandawards18 #firstdivisionplayeroftheyear pic.twitter.com/2anO0hKof8

Collie O'Neill from @UCDAFC with his award for the First Division Manager of the Year #PFAIrelandawards18 pic.twitter.com/nUDmTafeoI

“After a brilliant season, which has seen him lead the team by example from the heart of our midfield, Gary O'Neill was deservedly crowned the PFAI First Division Player of the Year.

“Gary played an instrumental role in our title winning side, scoring nine league goals on the way to the title,” they added.

The Tralee native joined UCD AFC at the beginning of the 2015 season, and played in all four European games that year.

The 23-year-old is set to remain at Belfield as the team returns to the Premier Division.