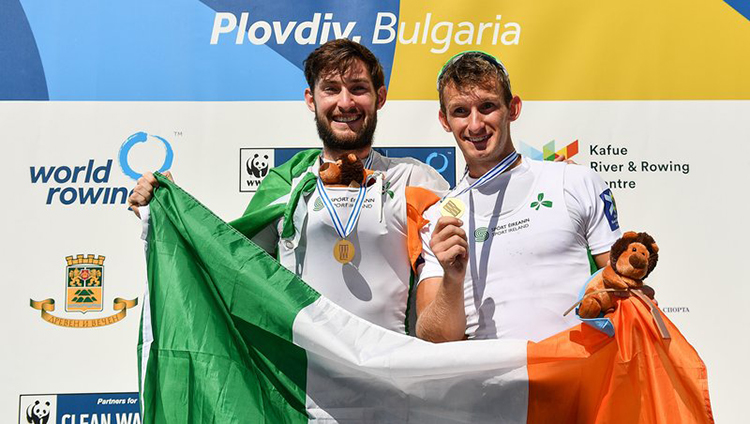 The Olympic silver medallists rowed to glory at the competition in Bulgaria, comfortably finishing two seconds ahead of race rivals Italy.

University College Dublin alumnus Paul O’Donovan, recently graduated from UCD’s School of Public Health Physiotherapy and Sports Science, and his brother captured the top prize after pulling ahead in the last 500 metres.

Backed by a tailwind as they rowed from lane six, the Skibbereen duo looked comfortable throughout the 2km race, finishing in 6:06.81.

Following the race, the brothers admitted that it was one of their best-ever performances.

The O'Donovan brothers claim that a night out on the town in Plovdiv was what set them up for 'the best strokes we ever pulled in our lives'! #RTESport pic.twitter.com/nSyr9Duswp

“We planned to win it all year. We have been trying hard to win every race and we said the most important one will be the World Championship final this year," said Gary, speaking to RTÉ Sport.

“When the Italians go ahead of us the very last thing we want to do is panic; that would only make things a lot worse.”

Paul added: "The race is long and we’re still within touching distance so there was never any panic. Even though they were ahead we were happy with our own start."

It's a gold medal for Gary and Paul O'Donovan at the World Rowing Championships with a dominant performance in the men's lightweight double sculls. #PullLikeADog #RTESport pic.twitter.com/S8xST0pT0g

The brothers’ number one finish is the first time that Ireland had won gold in the lightweight double sculls at the World Championships.

"It is a pleasure to once again send my congratulations to Gary and Paul O'Donovan on winning a rowing medal," he said.

"They continue to inspire us, not only with this win at the World Rowing Championships but also with their mental and physical strength."

As a UCD Ad Astra Elite Sports scholar, Paul, and brother Gary, made history in 2016 when they became the first-ever Irish rowers to win a medal at the Olympics, taking silver in the lightweight men’s double sculls final at the Summer Games in Rio.