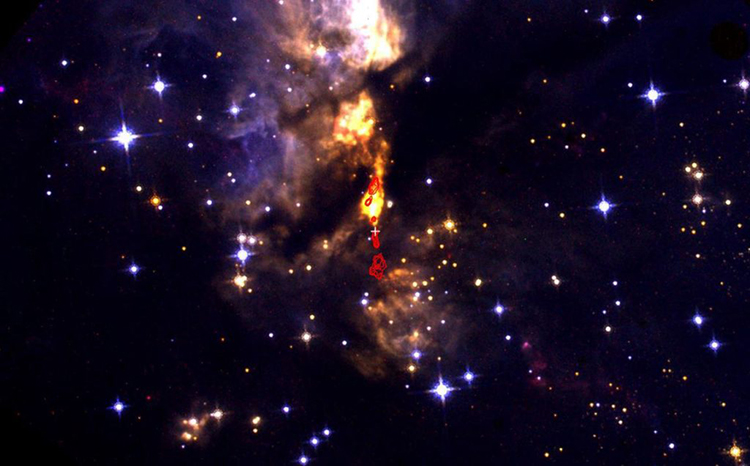 The white cross indicates the position of the massive protostar, while the red contours show emission from the shocked gas in the jets coming from the protostar

Astrophysicists in Ireland have, for the first time, measured a crucial step in the formation and evolution of stars.

An international effort lead by UCD PhD student Rubén Fedriani Lopez has recorded the total mass and energy from a jet driven by a high-mass protostar.

It is believed the cosmic birthing cries of these spiralling giants play a key role in the development of newly forming stars.

Stars are created in clouds of gas and dust, and early stars, or protostars, collect this gas with their gravitational pull.

As material condenses and a star begins to evolve, a portion gets ejected forming high-velocity jets which help redistribution this stellar outflow.

The team’s findings suggest a common mechanism is in place in the formation of jets in low-mass and high-mass protostars.

Published in Nature Communications, the work was conducted by the star formation group from the Dublin Institute of Advanced Studies (DIAS) and University College Dublin. 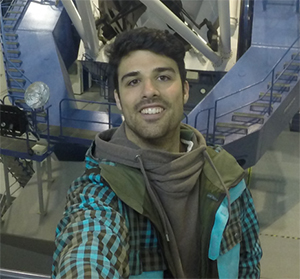 “We are now one step closer to filling in the gap between low-mass and high-mass star formation, which is very significant,” said Rubén, who is PhD student at DIAS and UCD School of Physics.

“We are on the cutting edge of science in this area, and having access to the best telescopes in the world via Ireland’s membership with the European Southern Observatory, and collaborating internationally has helped greatly in getting us there.”

The UCD and DIAS researcher led an international team of astrophysicists from seven different institutions in six countries.

Alessio Caratti o Garatti, co-author of the study, added: “After many years of debate, we are finally understanding how massive stars form, namely accreting matter from discs, while at the same time ejecting powerful and highly collimated jets.”

The team collected their data by making use of the Hubble Space Telescope, the Karl Jansky Very Large Array and from the Very Large Telescope at the European Southern Observatory.

The new discovery follows on from another major astronomical discovery by UCD physicists, who earlier this year helped redraw the map of the Universe by uncovering almost 300,000 previously unseen galaxies.

DIAS is the world's second, and Ireland's only, institute for advanced studies.