Elena Ferrante: a vanishing author and the question of posthuman identity 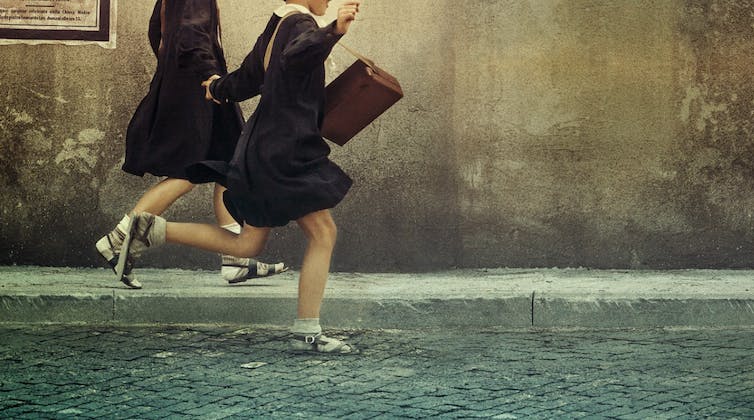 My Brilliant Friend, by Elena Ferrante, is now a successful television series. HBO

Does it matter who we really are? It definitely does in the eye of the law or if we are in a line of work in which our identity is crucial to perform our job correctly. For example, if we say that we can fly an aeroplane and we are subsequently hired as commercial pilots, our identity really does matter to the hundreds of people whose lives would be in danger if we had never received appropriate training for it.

But there’s a professional field in which, according to world-renowned writer Elena Ferrante, registry office records and formal education do not really count. As she wrote in her column for The Guardian in April 2018:

In the work of art, biography and autobiography have a truth completely different from that which we attribute to a CV or an income tax return. In that space there is, there has to be, a freedom of invention that allows one to violate all the agreements about truth in everyday life.

Ever since her debut novel, L'amore molesto (Troubling Love) was published in 1992, Ferrante has been consistent with this attitude – revealing very little about her CV and even less about her income tax return. That is, until the day journalist Claudio Gatti published a report of his investigation into the identity of the writer in October 2016. Based on Gatti’s analysis of publisher’s accounts, there is evidence to suggest that the author of the Neapolitan Novels coincides with one particular bank account holder: the translator Anita Raja, wife of Neapolitan writer Domenico Starnone.

In April 2017 I interviewed Starnone at the Italian Cultural Institute in Dublin. Being a voracious reader of his books I was really looking forward to that meeting and had been preparing for a few months. The tension started rising when I heard that Raja was also going to be in Dublin. I was warned not to ask any questions which could imply in any way that I believed Raja – or Starnone, for that matter – could be the brains behind the “Elena Ferrante” books: “Domenico gets really angry when someone asks him if he is Elena,” I was told.

But I couldn’t resist the temptation and I allowed myself one question that could be indirectly hinting at the issue of Ferrante’s identity. It had to do with Starnone’s 2016 novel Ties, which starts off with a series of letters written by the protagonist Vanda, who is distraught after her husband Aldo has abandoned her for a younger woman. I asked him:

Ties is divided into three sections written from three different points of view: the husband, the wife and the children. How challenging was it to write the story from Vanda’s perspective? Generally speaking, is it hard for a male writer to engage in a first-person narrative from a female perspective?

Starnone gave me a hard stare. I could feel the tension. Then, unexpectedly, he gave one of his wide disarming smiles. “It depends on the writer’s mimetic ability, which is one of the crucial elements of storytelling,” he started. According to Starnone, a good writer is one who can put him or herself in anyone’s shoes. The written word can speak the voice of anything, “even the flickering flame of a burning match”.

The metaphor was powerful. A flickering flame: one moment it’s there and the next it isn’t. Like the face and gender of the author Elena Ferrante.

My personal research on Ferrante’s notion of identity combines well with Starnone’s discourse on the importance of empathy to negotiate “otherness”. To create convincing characters, Starnone seems to argue, writers must be able to feel what others feel, think what others think – “become” others, if only on paper.

Equally, in Ferrante – as I contend in an in-depth study of her work – the “I” is always defined via a relationship with a “you” and therefore identity is always relational. Furthermore, the “you” in question might not be another human being but also an animal, an object, the environment, or a technological device. This special type of empathy between human and nonhuman entities gives birth to a new identity which is not just “relational” but indeed posthuman.

To understand how we are becoming posthuman, think of the ways smartphones and social media are shaping our daily lives so that we are constantly connected with others by means of technology. Think how emotionally bound we are to pets and animals whose status of creatures with feelings might soon be legally recognised. Or think how the debate on climate change is affecting our eating habits, social behaviour and even our reproductive ethos, as shown by birth-strikers (women who are refusing to have children because of climate change).

On the topic of posthuman identity, I have edited a forthcoming volume of collected essays, [Posthumanism in Italian Literary and Film. Boundaries and Identity]. In my chapter on Ferrante I explain why the symbiotic relationship between the two friends Elena and Lina, protagonists of My Brilliant Friend (also now a successful television series) may be defined as “posthuman”.

Elena and Lina’s identities are so closely bound to one another and to the porous Neapolitan landscape – described, at times, as an unstable mass of flesh, objects, inert matter, energy, blood, lava – that often readers and viewers are left wondering whether the two characters are in fact just one: the dyad Elena-Lina.

Through this loss of boundaries between the two characters and their surroundings, Ferrante intends to bring attention to the unsettling matter of a crumbling, fragmented world without margins, a world in which singular identity feels constantly threatened by the “other” – man, woman, avatar, the animal, the environment.

What is Ferrante’s answer to this threat? How does she advise us to counteract our fear of a borderless world in which the identity of the human is at risk of vanishing?

Read more: Elena Ferrante has her reasons for anonymity – we should respect them

Rather than suggesting that we die, destroy ourselves or disappear, like Lina in the Neapolitan quartet, Ferrante alludes to the fact that we are done with individualism and its notion of borders. If our identity is constantly redefined through dialogue with others, individuals and their names no longer matter. Our collaborative effort is what matters, our empathy with others – whether it’s humans, nonhuman animals, the environment or even our technological avatars.