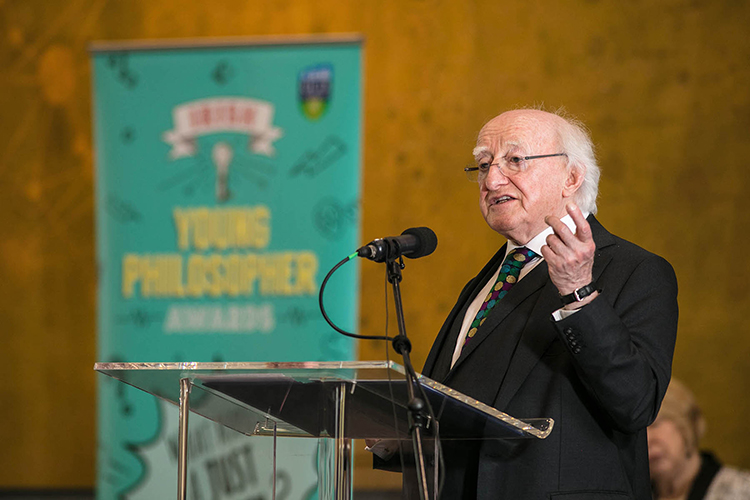 School students don’t just exist to be “useful” to the knowledge economy said President Michael D Higgins, warning an overemphasis on preparing young people for work has come at the expense of critical thinking in the classroom.

Criticising what he called a “narrow and utilitarian view” in Irish education that suggests “we exist to be made useful” the President said such a viewpoint could lead “to a great loss of the capacity to critically evaluate, question and challenge.”

“Talk of a knowledge society and the demand to enable our young people to meet its needs has at times… come to dominate our view as to the ultimate aim of a secondary school education. We need to be careful.

“There has been a very real danger that the powerful and vital force of creative thinking in the creation of truly functioning societies will come to be forgotten… a lost art as we pursue in a narrow sense, often solely, the skills and outcomes that will prepare young people for the world of paid work.”

A showcase of some of Ireland’s brightest young thinkers, the exhibition, now in its second year, is designed as a philosophical alternative to the BT Young Scientist Awards.

The competition encourages pupils at primary and secondary level to develop their critical thinking skills through classroom discussions and by using mediums such as posters, films, and essays to visualise their philosophical discussions.

“It is an initiative that will enable future generations and communities, schools of philosophy to emerge enhancing their thinking and reflective processes and exploring and promoting dialogue about life beyond the everyday,” he added.

Our students were thrilled today to meet the inspirational @PresidentIRL and his amazing wife Sabina Higgins at the #IYPA2019 @philosophyire @IYPA2018 @SchoolofEdUCD @ThinkersMidwife thank you to everyone who organized a thoroughly enjoyable and thought provoking day pic.twitter.com/IwY5e6yviE

Top prize at this year’s awards went to Lauren Doyle (16), a transition year student at Mount Sackville Secondary School for her project “Why is nature beautiful and why do we destroy it?”.

Detailing her entry, she made use of the ancient Greek philosophy of the golden mean (or golden middle way) to explain how society has been “unable to find moderation in the modern world.”

“While people generally had affection for the natural world we are becoming ‘less attached’ to it and more heavily dependent on devices that give a distorted view of nature,” she told the Irish Times.

“This helps to explain why we destroy what we love.”

Absolutely BLOWN AWAY by the level of philosophical and critical thinking in evidence across all young peoples' projects at the #iypa19 awards @ucddublin. The buzz of enthusiasm is infectious! You are all winners in my eyes! Huge congrats to all involved! pic.twitter.com/zj4tFnGccZ

Addressing the students at the awards, President Higgins encouraged them to ask questions “to which there is, yet, no definitive answer”.

“History tells us that it is the asking of [such] questions that leads to new discoveries, new possibilities… [and] the potential to create a better world no longer scarred by global poverty, growing inequalities, and exclusions and vulnerabilities exploited by hate.”

Mr Higgins said that the nearly doubling of participants at this year’s Irish Young Philosopher Awards was “the best endorsement” that philosophy was “an exciting and an emancipatory practice”.