SFI Researcher of the Year and Entrepreneurship Award for UCD professors 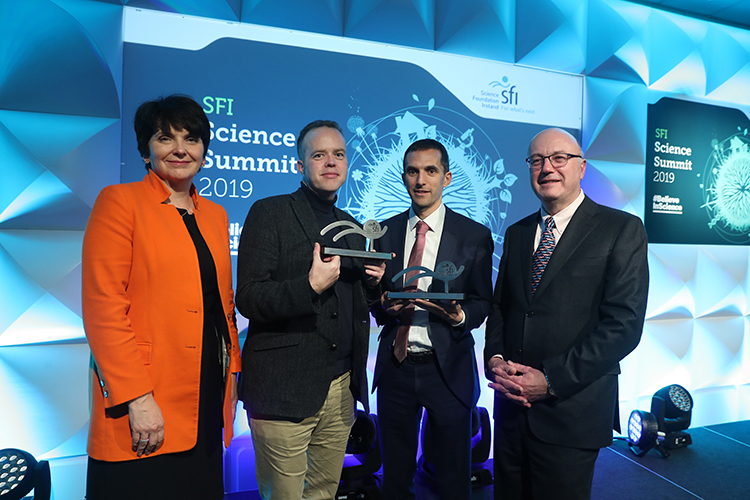 Professor Kevin O’Connor was declared SFI Researcher of the Year for his pioneering work in bioeconomy, while Professor William Gallagher, from the UCD School of Biomolecular and Biomedical Science, received the SFI Entrepreneurship Award.

The UCD duo were presented with their Awards at the 2019 SFI Science Summit, where 300 leading members of Ireland’s research community came together to celebrate this year’s achievements in Science, Technology, Engineering and Maths (STEM) in Ireland.

Acknowledging the winners, Minister for Training, Skills, Innovation and Research and Development, John Halligan said: “[These] Awards recognise the breadth and depth that research encompasses from industry collaborations to public engagement and the innovative breakthroughs that are leading research globally in the areas of Immunology, Biomaterials, cancer research and much more.”

“I would like to congratulate each awardee on their achievements, which illustrate the invaluable knowledge and resource that Ireland’s research community offers,” he added.

Professor O’Connor, from the UCD School of Biomolecular and Biomedical Science, is the Director of the Beacon, Ireland's national Bioeconomy Research Centre.

Working with industry, he has received more than €30m in EU funding for developed technology to convert dairy by-products into an organic acid. 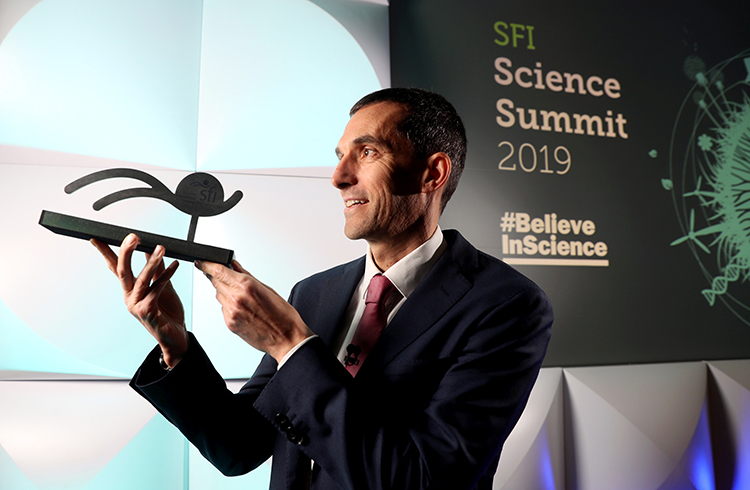 “I am delighted and honoured to receive this prestigious SFI award,” he said. “It is a recognition of the dedication of the many researchers and industry partners with whom I work and collaborate with, across multiple scientific fields and sectors, at UCD, across Ireland and internationally.

“Through these collaborations we are creating knowledge and translating this knowledge into innovative technological solutions to address global and societal bioeconomy challenges.

“I would especially like to acknowledge and thank SFI for their funding, and UCD, BEACON Centre members and my wife and family for all their support,” he added.

Professor O’Connor is a member of the UCD Earth Institute and has published extensively and patented technologies on the conversion of waste plastics to biodegradable plastic and the biotechnological production of hydroxytyrosol, a health promoting molecule.

He is also shaping the European Bioeconomy Strategy through his chairmanship of the Scientific Committee for the Bio-based Industries Joint Undertaking (BBIJU), a €3.7 billion Public-Private Partnership, and through his recent appointment to Horizon Europe’s mission board for Climate Change Adaptation and Societal Transformation.

He is one of only two Irish members appointed to the EU’s expert advisory boards on major challenges.

He is also the co-founder of two UCD spin-out companies, Bioplastech and Nova Mentis, both supported by NovaUCD.

Receiving the Entrepreneurship Award, Professor William Gallagher, who is Director of the UCD Conway Institute, has developed a prognostic test for early-stage breast cancer that can help reduce the number of breast cancer patients receiving unnecessary chemotherapy.

His research resulted in the establishment of OncoMark, a UCD spin-out company, currently headquartered at NovaUCD.

OncoMark focuses on the development and application of biomarker panels which address critical unmet needs for cancer patients.

Following participation in a selection of large-scale European networks, OncoMark in 2015 secured €2.7m through the Horizon 2020 SME Instrument Programme Phase 2 and raised an additional €2.1m in 2017 from a number of VC firms, private investors and Enterprise Ireland to accelerate its product portfolio to market.

This funding has been used to clinically validate its OncoMasTR test kit and secure CE-marking in advance of the commercial launch of the test.

The original research that resulted in the identification of the panel was co-led by Professor Gallagher and his team at UCD, together with Professor Adrian Bracken at Trinity College Dublin.

"Fundamental to an ability to innovate is the existence of an environment where discovery research is possible and is valued,” Professor Gallagher said.

“In this respect, I have been fortunate to work very closely with excellent basic and translational researchers at the UCD Conway Institute, such as Professor Amanda McCann and Professor Bill Watson, and with clinical colleagues based in our affiliated hospitals, including Professor Cathy Kelly, Mater Misericordiae University Hospital and Professor John Crown, St. Vincent's University Hospital.”

“Such interactions have been critical in allowing us to bring forward novel ideas and findings from the lab bench towards clinical implementation.”

He added: “Our ability to find new innovations derived from ongoing basic research in our laboratory and others has been helped enormously by the excellent support of NovaUCD, the technology transfer arm of the university."

Congratulating the UCD winners, Professor Orla Feely, UCD Vice-President for Research, Innovation and Impact said the presentation of SFI awards to professors O’Connor and Gallagher reflected “the strength and impact of research and commercialisation activities taking place across UCD.”