Without passing any new legislation, the Trump administration has made significant cuts to some of America’s largest social programs according to a leading US academic.

In a keynote lecture at University College Dublin, Professor Don Moynihan from Georgetown University, said that the lives of millions of Americans had been affected because of a “deliberate choice” by the US government to encourage confusing paperwork and complex regulations.

For policymakers, administrative burden was an effective tool in making it difficult for people to access certain types of benefits, Dr Moynihan said. 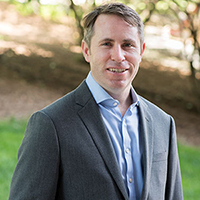 “Consequences of burdens don’t fall evenly across the population… they tend to hurt some people more than they hurt others.

“If you’re part of a marginalised group or from a low income community, then encountering this administrative burdens [in so far as they’re means tested] becomes part of your daily life.

“[As does] being the subject to discretionary bias on the part of street level bureaucrats who act as the gate keeper to services.”

Administrative burdens diminish the effectiveness of public programs, often perpetuate long-standing inequalities, and can even block individuals from fundamental rights like voting, the lecture heard.

Discussing the changes to Obamacare under the Trump administration, Dr Moynihan told the third annual UCD behavioural science and policy workshop while Republicans had been unsuccessful at a legislative level, some had used administrative burden to greatly reducing the number of people enrolling in the programme. 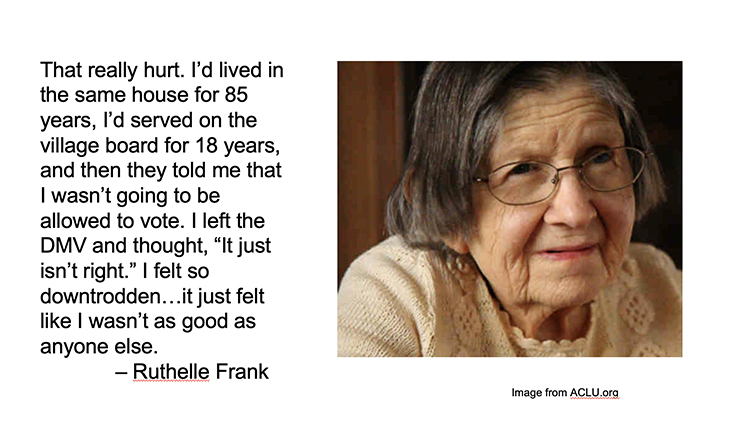 A slide from Professor Moynihan's lecture discussing the case of Ruthelle Frank, who voted in every US election since 1948 but who was never issued a birth certificate, testifiing about the burdens she faced to get a new ID

By shortening enrolment periods, to eliminating advertising for the program, to requiring those signing up to do so online, 17,000 people in Arkansas lost their lost health insurance coverage in just four months.

“Four out of five people will lost benefits not because they’re not eligible for the programme but because the paper work is so odious,” Dr Moynihan added.

By making it online only, what Arkansas was doing was “making it so you needed to be technological literate… of the Medicaid population [in the state] about one third of them did not have access to a computer. About four out of ten didn’t use email.”

According to Dr Moynihan, a survey carried out later found that 95% of those who lost their benefits should have retained them.

Further warning of the dangers of administrative burden, an example of it being used to legally deny American citizens their right to vote was presented.

In 1965, the state of Louisiana required anyone registering to vote to complete a literacy test.

Answering any question incorrectly, the example of which included ‘spell backwards forwards’, meant a person was unable to register to vote. 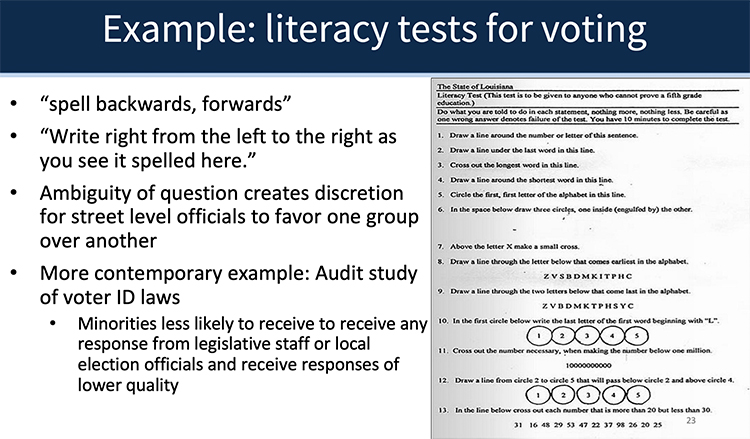 “The purpose of the test wasn’t to establish literacy, it was to give ambiguity to the street level bureaucrat so that they could take the answers that they liked… and be able to deny a black citizen the right to register to vote,” Dr Moynihan said.

“A more contemporary example looked at emailing election officials around the United States and asking them what was needed to vote.

“In one treatment, [researchers] sent their requests from a white sound names, and the other from ones sounding Latino.

“They found the latter tended to get few responses and less useful answers.”

He added: “There may still be some racial bias animating the implementation of some of these burdens… the evidence is mixed but overall, there is more evidence of discrimination than not.”

In Denmark, Dr Moynihan said, it was found that when accessing social welfare programmes Arab-Muslim families were asked a lot more questions than those families with more traditional Danish names.

“Cumulatively, these burdens colour our experience and perception of government,” he added, further explaining that burdens have the benefit of being something the media and members of the public generally ignore because more questions on a form is normally not something discussed in the press.

Understanding why administrative burdens exist and how they can be reduced is essential for maintaining a healthy public sector, Dr Moynihan concluded.