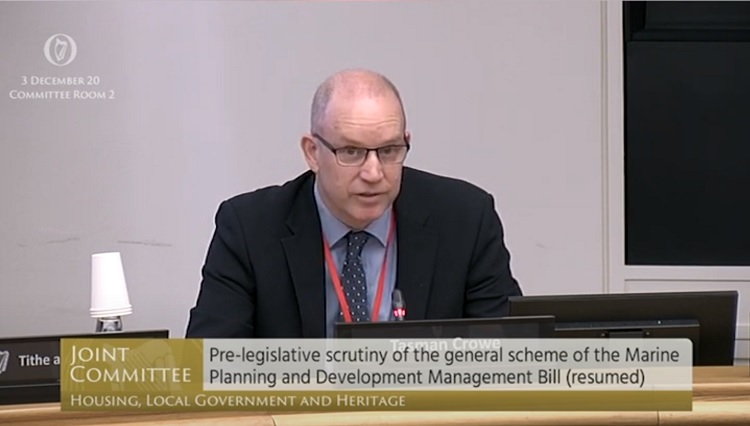 Ireland’s failure to offer environmental protections to a greater area of its oceanic waters is risking the future of its marine ecosystem, an Oireachtas committee has heard.

Professor Tasman Crowe, UCD School of Biology and Environmental Science and Director of the UCD Earth Institute, said new legislation and extensive consultation are needed to ensure that Ireland's Marine Protected Areas (MPAs) can continue to protect and preserve the biodiversity of Irish waters.

MPAs are widely used around the world and can be thought of as marine areas that are protected and managed over the long term, with a primary objective of conserving habitats and/or species and associated ecosystem services and cultural values.

As such, restrictions are placed on those activities that are considered harmful to the specific habitats, species or ecosystem properties for which the area has been designated.

At present, 2.14% of Ireland’s maritime area is designated for protection, primarily as Natura 2000 sites under EU Directives. Under the current programme for government, Ireland has committed to increasing coverage by MPAs to 10% as soon as is practicable and to 30% by 2030.

Professor Crowe was speaking before the Oireachtas Housing, Local Government and Heritage committee as it scrutinises the planned Marine Planning and Development Management Bill 2020, which aims to create new laws for the planning and regulation of sectoral activities in Ireland’s marine areas.

A concern he addressed to the committee was that despite the importance of MPAs to marine conservation and management, the bill and the National Marine Planning Framework were “likely to come into force before selection and designation of MPAs can take place”.

This would mean that some areas containing rare, vulnerable or important species, habitats and ecosystems may be zoned for sectoral activities which may ultimately merit protection by MPAs but which are damaged before such protections can be put in place.

To prevent this Professor Crowe recommended that, in the short-term, a sensitivity analysis should be carried out to allow the identification of likely MPA candidates that can be afforded temporary protections.

“As a researcher, I’ve worked and published extensively on how multiple local and global pressures can combine in complex ways to affect marine ecosystems and the services and benefits they provide, with some combinations of pressures being particularly damaging, while others may actually reduce each other’s effects to some degree,” he added.

“A holistic approach to marine planning, governance and conservation is therefore required, encompassing all sectors, perspectives and potential impacts, both positive and negative.

“Although this may not be directly provided for in the MPDM bill, its implementation as part of the NMPF will require coordination among relevant Departments and wide and sustained consultation. The NMPF is not yet available in its final form, but I do hope that this kind of coordination and consultation will be well provided for.”