The need for heroes in times of crisis never dims, even if that hero is a former cartel leader responsible for the death of thousands. Joaquín “El Chapo” Guzmán has been cast as a Robin Hood figure during the coronavirus crisis, after his relatives began distributing food packages to the poor in Mexico stamped with his image.

Latin America has a long history of Robin Hood figures who have come to prominence at moments of social and political crisis where the state is seen as weak or corrupt. This was the case with Pancho Villa during the Mexican Revolution from 1910-20, who morphed from a bandit to a revolutionary leader and redistributed land and resources to the peasantry.

Then there was drug kingpin Pablo Escobar in Colombia in the narco era from the 1970s. Escobar is still remembered by some for his widespread social works which included building 5,000 new apartments and a number of football pitches for Medellín´s poor, as well as supporting schools.

Both posed as Robin Hood-like heroes to marginalised populations forgotten about by officialdom. In reality, given their vast power, wealth and sanction of brutality, they were nothing like Robin Hood.

Despite this, the social bandit myth survives through certain figures in Latin America. Guzmán was touted as a latter-day Robin Hood during his heyday as Mexico’s leading cartel boss from the mid-1990s. The loyalty (counterbalanced by terror) that he inspired in his local community in Sinaloa may well have delayed his eventual final capture until 2016.

His Robin Hood credentials attracted the Hollywood actor Sean Penn to interview him for Rolling Stone magazine in 2015. Penn declared that Chapo was known in Mexico as “a cold pragmatist” and “as a Robin Hood-like figure who provided much-needed services in the Sinaloa mountains, funding everything from food and roads to medical relief”. 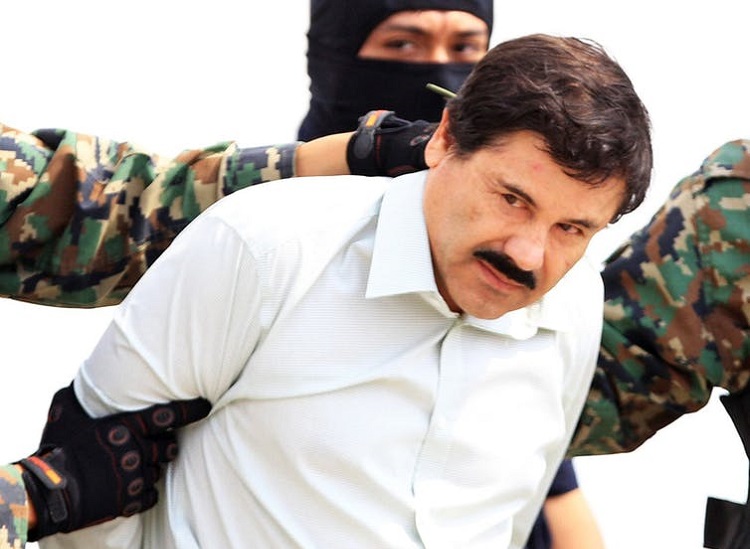 El Chapo after being recaptured in Mexico in 2014. Mario Guzman/EPA

El Chapo’s carefully orchestrated escapes from prison in 2001 and in 2014 via a pre-built mile long tunnel, were legendary. They strongly hinted at collusion with the prison authorities.

Nevertheless, the image remains of El Chapo as a figure who opposed the state and acted honourably towards his people. Few in his Sinaloa community have talked ill of him since his conviction and incarceration in the US for drug trafficking and money laundering in February 2019.

Today’s Mexican cartels have focused less on displays of community charity, and more on a rule of fear and violence.

Nevertheless, the coming of coronavirus to Mexico has presented an opportunity to El Chapo’s relatives. They capitalised on the crisis by handing out food packages bearing his image to poor communities in Guadalajara, designed to ensure the loyalty of Mexico’s most vulnerable to his legacy and to the continued operation of the Sinaloa cartel. Meanwhile in Culiacán, Sinaloa, El Chapo’s sons reportedly imposed a coronavirus curfew, threatening beatings and fines to those who do not comply. Other Mexican drug cartels have also been handing out food packages.

Similar activity has taken place in the former mafia stronghold of Sicily, where the organisation handed out food packages to desperate families. Unlike in Mexico, however, the Cosa Nostra mafia has not attached its support to a recognisable figure such as El Chapo. 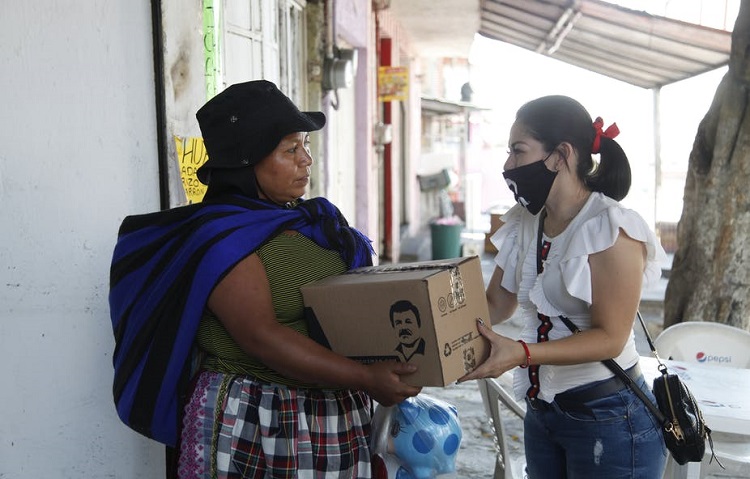 Food and supplies, labelled with the name and image of Mexican narco Joaquin ‘El Chapo’ Guzmán, is distributed during the coronavirus pandemic in Guadalajara. Francisco Guasco/EPA

The Mexican president, Andrés Manuel López Obrador, who was voted into office in 2018 on an anti-corruption and anti-violence platform, was seen greeting the cartel leader’s mother, Maria Consuelo Loera, on a visit to Sinaloa in late March. It opened López Obrador up to accusations of narco cooperation and sympathy – accusations which have also been levelled at every recent administration in Mexico. López Obrador defended the meeting and called El Chapo’s mother a “respectable old lady”.