Professor Robert Gerwarth is the 2020 recipient of the Reimar Lüst Prize, the first academic based in Ireland to receive the honour.

Awarded by the Alexander von Humboldt Foundation, and valued at €60,000, the prize recognises outstanding scholars who have made exceptional contributions to Humanities or Social Science research and to the promotion of cultural relations between Germany and their own country of residence.

Awardees are also invited to spend up to one year in Germany for research purposes. 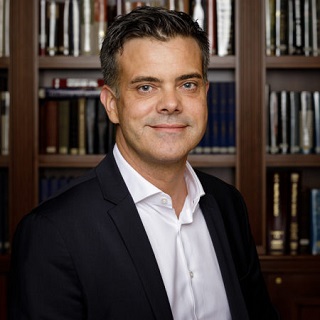 Professor Robert Gerwarth, Head of the UCD School of History at University College Dublin, and Director of the UCD Centre for War Studies

Head of the School of History at University College Dublin, and Director of the UCD Centre for War Studies, Professor Gerwarth was named as this year's winner earlier this month.

Professor Gerwarth said: "I am deeply grateful to the Humboldt Foundation and the Fritz Thyssen Foundation for awarding me the 2020 Reimar Lüst Prize. It is a great honour to receive this prestigious prize - it will allow us to build further on the many cultural and academic connections that already exist between Germany and Ireland."

Named after the German Astrophysicist Reimar Lüst, the prestigious award is granted to humanities scholars and social scientists working outside Germany who, through their research, have shaped academic and cultural relations.

A pioneer of European space research and former President of the Humboldt Foundation, Professor Lüst was a leading figure in promoting international exchanges between scientists and scholars.

In appreciation of his life-long work, the Alexander von Humboldt Foundation and the Fritz Thyssen Foundation established the Reimar Lüst Prize in 2006.

An expert in the field of political violence in the twentieth century, Professor Gerwarth has held research fellowships, or visiting professorships, at Harvard University, the Institute for Advanced Study in Princeton, and Sciences Po Paris.

He is an elected Member of the Royal Irish Academy and the Academia Europaea.