Opinion: Wallabies are on the loose in Britain – and we’ve mapped 95 sightings 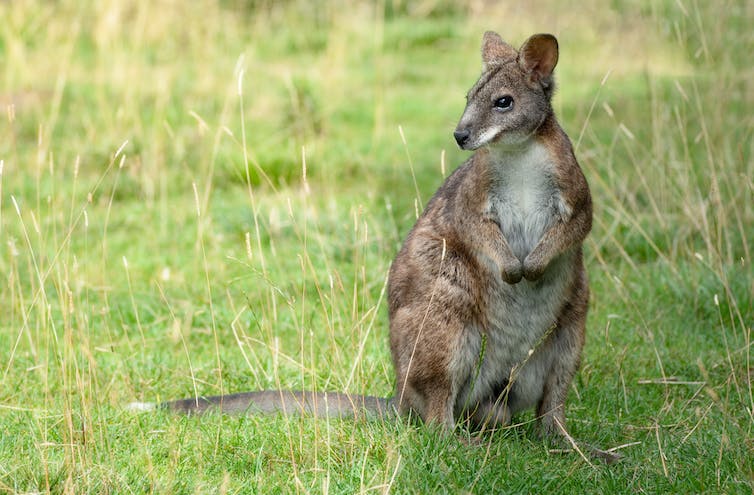 When you think of kangaroos and wallabies, you probably don’t think of the temperate climate, unsettled weather and agricultural lands of England. Yet on such pastures, the red-necked wallaby has found a home.

Red-necked wallabies have been present in Britain for more than a century, originally being imported for zoos and private collections where they were popular attractions. However they also proved to be adept escape artists that were adaptable enough to survive in the British countryside.

Many were intentionally released during the second world war, as keepers and collectors had other priorities. This increased the number of feral animals in Britain and, eventually, a population became established in the Peak District (though it has probably been extinct since 2009).

Wild wallabies continue to be recorded across Britain though, with the occasional sighting in a garden, country lane, or along a motorway making local and sometimes national news. Yet apart from the occasional, high-profile article, nobody really seems to have paid much attention to them in recent years. This oversight may appear to be understandable; while kangaroos can be human-sized, these wallabies are “just” cute, beagle-sized herbivores.

However, the introduction of invasive, non-native species can have substantial impacts on native species, and wallabies are no exception. In New Zealand, introduced red-necked and tammar wallabies compete with sheep for grazing and have harmed native plants which evolved in the absence of mammals that would eat them. There, wallabies are often subject to both lethal and non-lethal population management.

Two years ago we began to answer some of these questions by collecting data from news reports, social media and public data repositories for the period 2008-2018. We created a website for people to submit sightings. It was important to account for returned escapees, of course, so any wallabies that were confirmed as being returned to their owners were discounted.

It was also important to ensure that the sightings were in fact wallabies, and not a misidentified muntjac (a small, non-native deer) or domestic cat, so only confirmed sightings or those that were accompanied by images were accepted. From this simple data, now published in the journal Ecology and Evolution, we mapped the distribution of wallaby sightings across Britain: 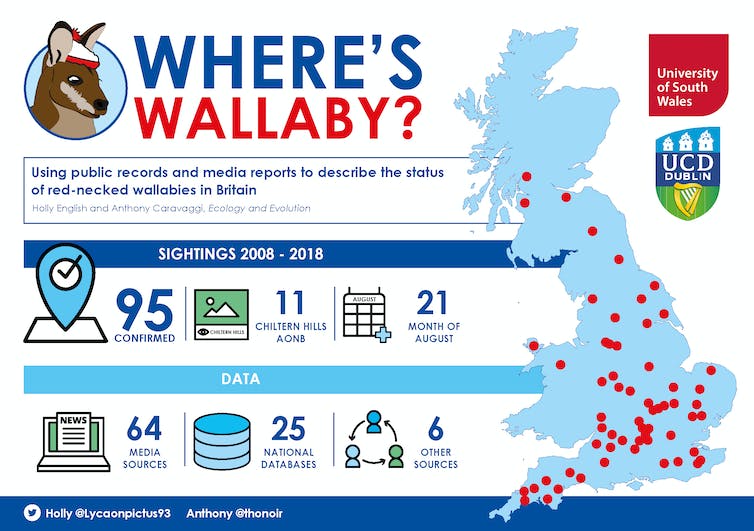 11 of the 95 sightings were in the Chiltern Hills. English & Caravaggi, Author provided

We recorded a total of 95 confirmed sightings between 2008-2018. Most were in the south of England, such as this one in Kent:

The Chiltern Hills to the west of London were a particular hotspot. It’s impossible to say whether this represents an actual established or establishing population.

Far more sightings were recorded in August than any other month. Why might this be? Perhaps there are more escapees at that time of the year, for one reason or another. Maybe wallabies are just more active in summer, or maybe potential human observers are. Perhaps the species is breeding in wild and the young animals are dispersing away from their mothers.

The Peak District population persisted long enough that the animals were certainly breeding. In addition, we retrieved two records of wallabies with young (joeys) in the pouch. Both originated from the same approximate location in Cornwall but occurred one year apart, in 2009 and 2010. This could easily be a coincidence, or it could be an indication that wallabies are becoming established in the British countryside. 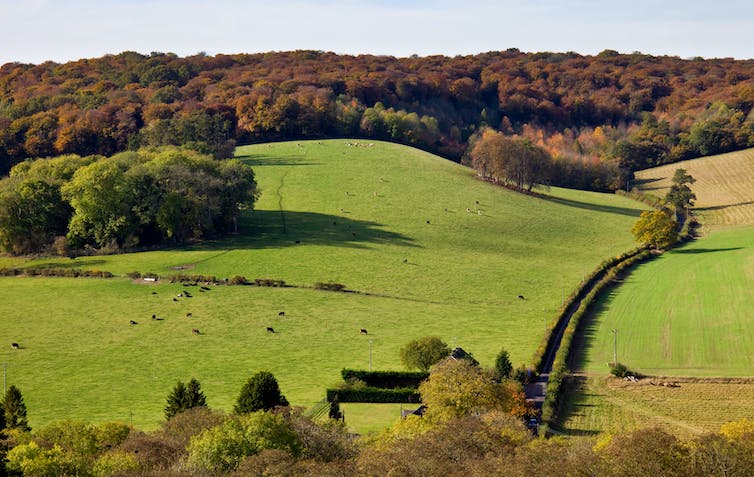 The Chilterns: there’s wallabies in them thar hills. AdamEdwards / shutterstock

Our research shines new light on wild wallabies in Britain but, as always with a study of this nature, it also asks more questions than it answers.

For example, could they have a negative impact on native British plants. They mostly eat grasses, roots and leaves and would be competing with hares, rabbits and sheep. They might even exacerbate the growing impacts of muntjac deer. That said, wallabies are unlikely to be as destructive for vegetation in Britain as in New Zealand – while they are not native, grazing pressure from mammals is an established process in British ecosystems.

Wild wallabies might also carry diseases that are transmissible to other species or humans, such as leishmaniasis, fascioliasis and Salmonella. Marsupials are considered to be important hosts of Leishmania parasite species and one study found that more than a quarter of orphaned juvenile wallabies were infected with Salmonella.

These are important questions with conservation and management relevance, both for wallabies and other wildlife in Britain.

If you are lucky enough to spot a wallaby, you can report your sighting to your local biodiversity record centre or the National Biodiversity Network.