Demons of the Deep State: How evangelicals and conspiracy theories combine in Trump’s America 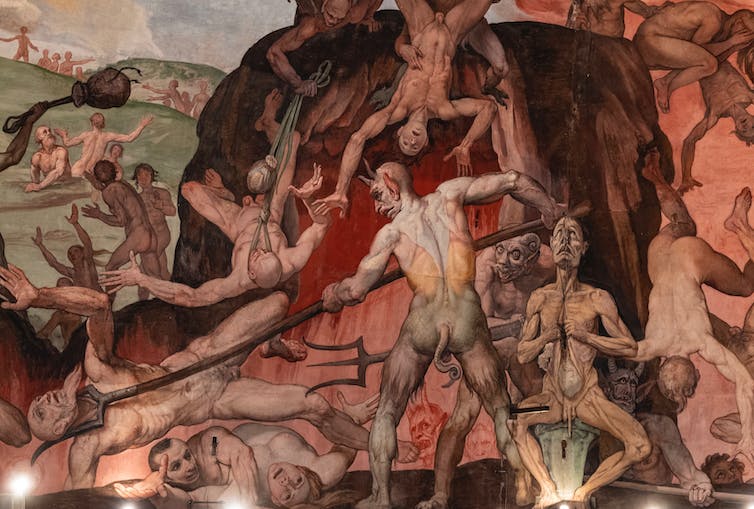 In spiritual warfare, the battle against demons is constant. Kotroz/Shutterstock

Are demons active forces in American life and politics? That is what a large number of evangelicals in the US believe and are increasingly vocal about.

Since the 1980s, growing numbers of evangelicals have given the fight against demons a key role in their spirituality and their politics. Known as “spiritual warfare”, this views demons as central actors in world politics and everyday life. While often seen as fringe, belief in spiritual warfare is common across denominational lines, including among evangelicals close to Donald Trump such as Robert Jeffress and the president’s spiritual advisor, Paula White.

A key idea in spiritual warfare is that demons don’t only attack people, as in depictions of demonic possession, but also take control of places and institutions, such as journalism, academia, and both municipal and federal bureaucracies. By doing so, demons are framed as advancing social projects that spiritual warriors see as opposing God’s plans. These include advances in reproductive and LGBTQ rights and tolerance for non-Christian religions (especially Islam).

In a recent article published in the journal Religion, I explore how these ideas about demons combine with the wider Christian nationalism shown to be prevalent among Trump’s support base. Through a survey of conservative evangelical literature, articles, and television and radio broadcasts released between 2016 and 2018, I analyse how their authors used discourses of spiritual warfare to navigate the changing political reality, and Trump’s victory and presidency in particular.

The evangelicals whose works I analyse vary in their attitudes to Trump, from ardent advocates to reluctant supporters. Yet even the reluctant supporters interpret his presidency in terms of spiritual warfare, framing Trump’s victory as a divine intervention against a demonic status quo.

Trump’s alleged battle against the “deep state” here adopts cosmic meaning, as not only the US government but undocumented immigrants and Black and LGBTQ people are cast as agents of demonic forces.

The deep state has become a watchword of the Trump era, a term used by his supporters to depict Trump as an outsider fighting a corrupted political system. The deep state is central to the conspiracy movement QAnon, which depicts Trump as at war with a “deep state cabal” of devil-worshipping cannibal paedophiles.

QAnon has many overlaps with spiritual warfare and its practitioners. It uses similar ideas of religious revival and donning the “armour of God” against unseen foes.

Not all spiritual warriors engage with QAnon. But even for those that don’t, the deep state has come to represent broader ideas of demonic control, as demons are imagined as a “deeper state” working behind the scenes. Demons become the source of economic and environmental regulations and of social welfare programmes. The deregulatory ambitions that former White House chief strategist Steve Bannon called Trump’s “deconstruction of the administrative state” become imagined as a project of national exorcism.

For many spiritual warriors this project began on election night 2016. Trump’s improbable victory stoked narratives of divine intervention. Comparing the red electoral map of Republican victory to “the blood of Jesus” washing away America’s sins, one evangelical framed the election as overthrowing “Jezebel”, a demonic spirit often depicted as behind reproductive and LGBTQ rights.

Banning abortion is central to conservative evangelical politics. Spiritual warriors often go further, framing support for abortion and same-sex marriage as both causing and caused by demonic control. They portray evil spirits and sinful humans as creating reinforcing systems of beliefs, behaviours and policy agendas. The deep state has become a key representation of these systems.

In spiritual warfare, this new narrative is one where God is retaking control of the US from demonic forces. One where God’s truth is being reasserted over competing truths, which are reframed as demonic lies. Spiritual warfare here becomes a struggle over competing narratives about what America is, or should be. Dismantling the deep state is part of this struggle. But it is not the only one.

The demons at work

Spiritual warfare has also come to frame evangelical reactions to ongoing protests. Demonic opposition to Trump has been positioned by spiritual warriors as being behind events from the 2017 Women’s March to the 2020 protests sparked by the killing of George Floyd. Stances on immigrants and refugees are also included.

In one book, turned into a part-biopic, part-propaganda film called The Trump Prophecy by the conservative evangelical Liberty University, victory over demons is paralleled with the mass expulsion of undocumented migrants. Others have framed the central American migrant caravans as carriers of diabolic “witchcraft”.

Conspiratorial claims that both the protests and migrant caravans were funded by the investor/philanthropist George Soros or the deep state close the circle. They cast demonised groups – such as “nasty” women, Black protesters, refugees and undocumented migrants – not just as agents of corrupt deep state forces but avatars of the demonic deeper state behind them.

Spiritual warriors are often keen to separate the demons they battle from the people they claim to be saving from them. But today such deliverance from evil has been shown to never just be about the spiritual salvation of individuals, if it ever was. It has profound and lasting material consequences for both those individuals and the nation.

By imagining demons behind social welfare, economic and environmental regulations, or legal protections for marginalised groups, spiritual warriors frame the dismantling of these systems as ridding the US of demons. More than this, they frame the people and groups they see as benefiting from those systems as agents of evil incarnate. Only after such people are removed can there be a national rebirth.