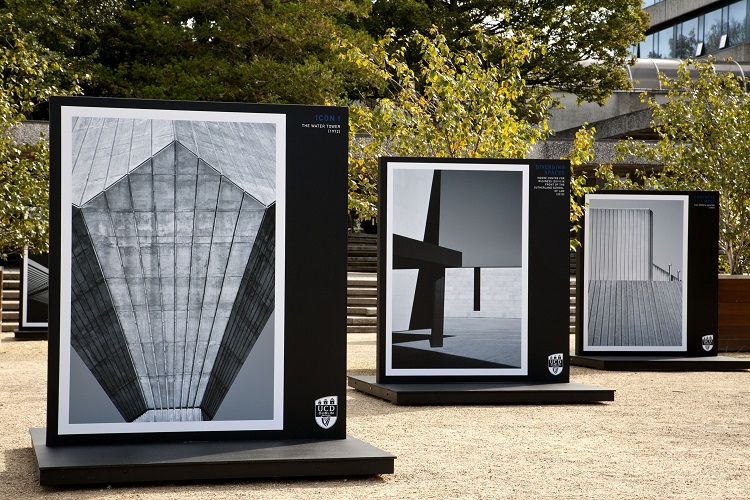 Belfield 50 marks the five decades since University College Dublin transferred its administration and the faculties of Arts, Commerce and Law from Earlsfort Terrace to join Science on the Belfield campus.

To celebrate Belfield and the generations of students and staff who lived and learned on the campus UCD President Professor Andrew Deeks and the Vice-President for Research, Innovation and Learning, Professor Orla Feely hosted a virtual launch of a timeline exhibition, on display both inside and outside the lower ground floor of the main restaurant, a book - Making Belfield, edited by Professor Finola O’Kane Crimmins and Dr Ellen Rowley, published by UCD Press, a photographic exhibition Conveying Space by Daniel Holfeld, on display in the plaza between Newman and Tierney, and a short film, Shaping Belfield, produced by Dr Ellen Rowley.

Professor Orla Feely said: “Belfield 50 is a celebration for the generations of students and staff who breathed life into the campus over these five decades.

“It sets out to tell the story of UCD’s ambitious development of this wonderful campus, from the modest purchase of Belfield House and lands in 1933 to provide sports facilities for the students to the building of the first academic building (Science) in 1964 and the subsequent arrival of all faculties to Belfield, along with student residences that now house 3,000 students.

“Today, the campus continues to evolve and the future looks bright with plans for the Centre for Future Learning and the Centre for Creativity destined to form a new era of education, research and outreach for the University.”

Looking to the future, President Professor Andrew Deeks said: “We have developed a Strategic Campus Development Plan 2016-2021-2026 which defines three distinct character areas: academic, housing our teaching, learning, research and innovation activities; sports and student amenities, housing our sports pitches and halls, our student centre and our student clubs and societies; and residential (containing our student residences together with retail spaces, dining facilities, meeting rooms and support facilities in a ‘village centre’).

Located on the lower ground floor of the Main Restaurant, the exhibition can be viewed from inside and out. Although the first tract of land was purchased by the University in 1933 to provide playing pitches for the students, it was in the 1950s, under President Michael Tierney that the large scale acquisition took place in a visionary plan to solve the chronic overcrowding in Earlsfort Terrace and develop a true campus experience for students. 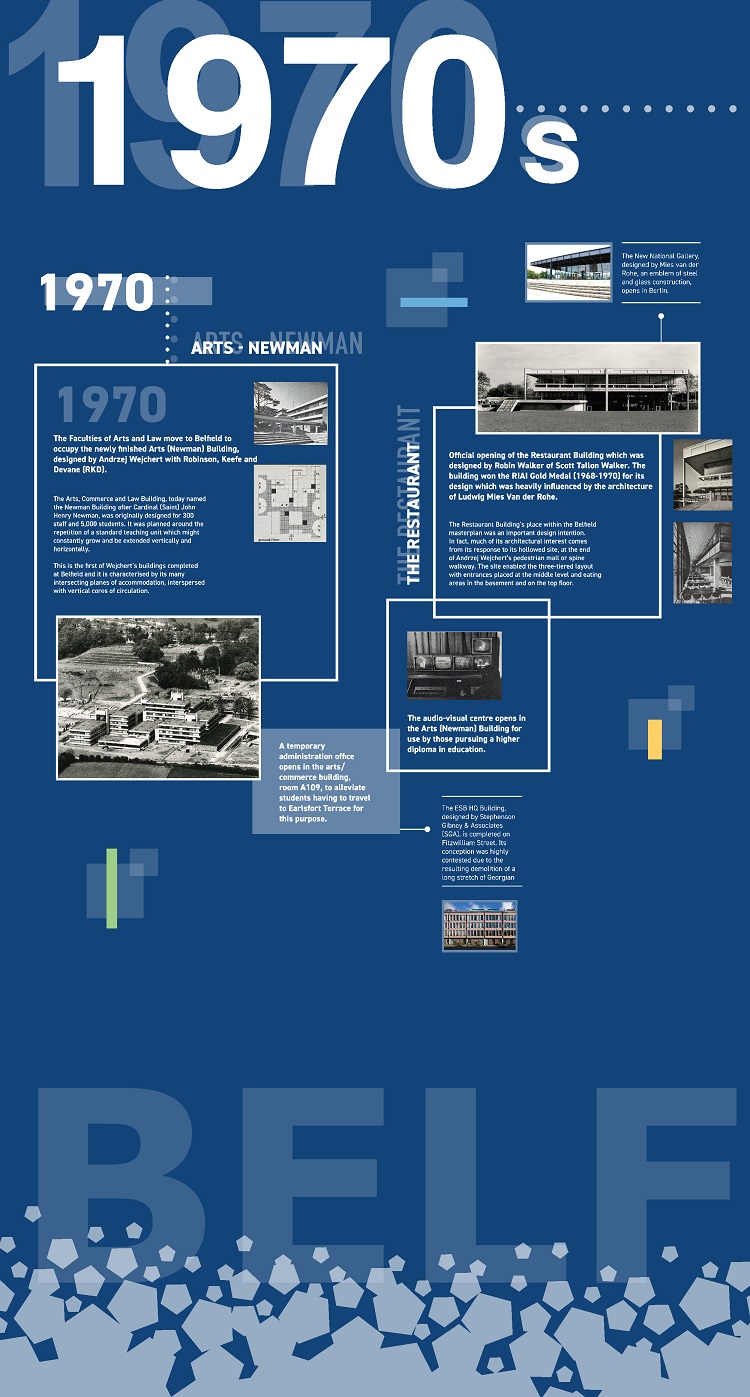 In 1964, just as the science students and staff took up residence at Belfield, Andrzej Wejchert along with Robinson Keefe Devane (RKD) was announced as the winner of the international competition to design the masterplan and central complex for the Faculties of Arts, Commerce and Law, along with the University Administration and Registry.

On Tuesday 29 September 1970, Éamon de Valera, Uachtarán na hÉireann, declared open the new building and President of UCD, Dr Jeremiah J Hogan, spoke as follows: “The opening of this new building… is a capital occasion in the history of University College. We shall now have between seven and eight thousand students here at Belfield, while about 3,000 remain at our various older centres. The greater part of the College will be here and it is a matter of time until all is here…

“Universities have many difficult problems at this time. But it may be said today that University College Dublin, with the means provided by the Irish Government and people, has made great strides towards the solution of one problem which was very urgent in our case – that of space in which to live and do our work.”

The Timeline Exhibition takes visitors through the evolution of Belfield, from the turning of the sod to the vision for Future Campus and the Centre for Creativity.

Shot by photographer Daniel Holfeld during the quiet of COVID restrictions, this exhibition of 19 pieces conveys the atmosphere of the architecture in Belfield and emphasises the interaction between structure and natural light.

Holfeld’s photographs express fleeting moments of visual access, manifested in tightly cropped details. Through careful positioning and calculated framing, Holfeld illuminates the subtleties and nuances in architecture, while exploring the profession beyond its commercial appeal.

Choosing to work under cloudless skies and high sunsets the intention for Holfeld’s practice while having a transformative effect on the architecture.

Deep shadows and powerful illumination reveal clearly defined lines and crisp geometric shapes, which abstract his surroundings into graphical vistas turning the utilitarian into the iconic. 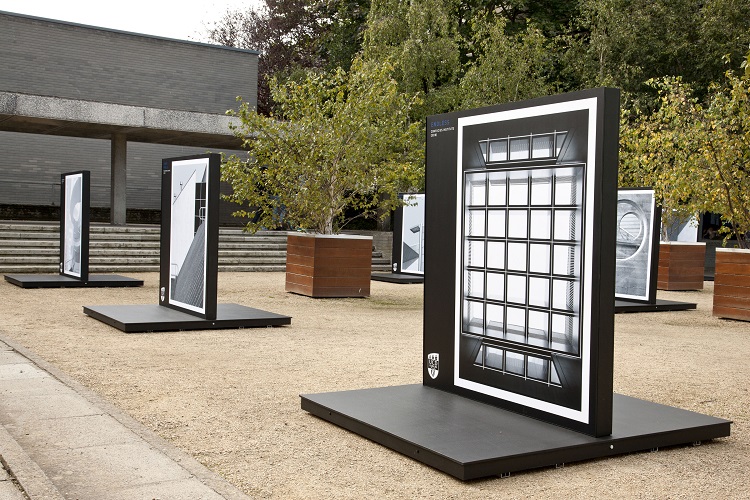 To achieve this, Holfeld crops building parts out of context, zooms in on architectural detail or isolates certain building features thereby creating, in the process, strong geometrical compositions that have a life of their own. Steps and lampposts, for example, shed their functional role to become two-dimensional flourishes while elsewhere façade segments lose their scale to become graphical abstractions.

In an intimate and powerful contemplation Holfeld’s images provide access to a new look at the built legacy of University College Dublin; deconstructing the elemental components of architecture, transforming the rebar, concrete and stucco of its buildings to change the way we think about the structures themselves.

Conveying Space is on display in the plaza between the Tierney and Newman Buildings.

Edited by Professor Finola O’Kane and Dr Ellen Rowley, Making Belfield: Space and Place at UCD examines the architecture of the campus from an academic perspective, with a focus on the origins and importance of UCD’s architecture, collections and libraries.

Steeped in architectural history, editors Professor O’Kane and Dr Rowley have drawn together a series of fascinating topics that tell the story of Belfield as a space and place that has fostered generations of students. Throughout the book are case studies on some of the architecture.

Their work is augmented by geographer Associate Professor Joseph Brady’s chronicle and contextualisation of the steps involved in the move to Belfield.

Sean Phillips, former Librarian, reflects on the symbolic importance of the Library which, apart from its practical functionality, forms a focal point for academic endeavour as well as having a value as a social lubricant on the campus.

Art historian, Professor Kathleen James-Chakraborty weaves through the international growth of campus universities with forthright views and comparisons. Dean of Architecture, Professor Hugh Campbell looks to the future in a personal narration of the changing landscape.

The essays will evoke memories of Belfield and of time spent there in the various spaces and places and will give the reader a deeper understanding of the place that has shaped so many.

Making Belfield can be pre-ordered directly from UCD Press: ucdpress@ucd.ie at a special rate of €25 (RRP €40) for UCD alumni, including postage.

Shaping Belfield, a short educational and experiential film on the shaping of the Belfield campus, produced by Dr Ellen Rowley, tells the story of the architectural development of UCD on its Belfield site in broad chronological terms.

Much of the film’s narrative is around the design and building of the Administration, Arts/Law/Commerce, Restaurant and Library buildings as the original infrastructure, overlaid on to historic greenfield landscape.

Side stories of the making of the Science Buildings, the Water Tower, the Sports Centre and then buildings for Agriculture and Engineering are also told as part of this ‘original campus’ history.

The film then overviews Belfield’s evolution through the 1990s and 2000s, pointing to significant additions and changes such as the O’Reilly Hall, the three architectural competitions (1999-2007) and the adaptation of Merville and Belfield Houses. Finishing up with a discussion on the Future Campus building plans and the impact on the estate.

Illustrated with archive photographs, archive ephemera including the NUI Commission of Enquiry and the competition conditions, original construction footage (RTÉ), new drone footage and architectural drawings, this is a richly visual and contextual educational piece. Architecture and Belfield’s spatial histories form the seam through the story.

As with so many projects in 2020, COVID-19 has taken its toll and a number of events are on hold until public health guidelines are relaxed.

The Belfield 50 website will include details of the full programme over the year.