Opinion: Ukraine - A divided America seeks moral clarity in a war against democracy 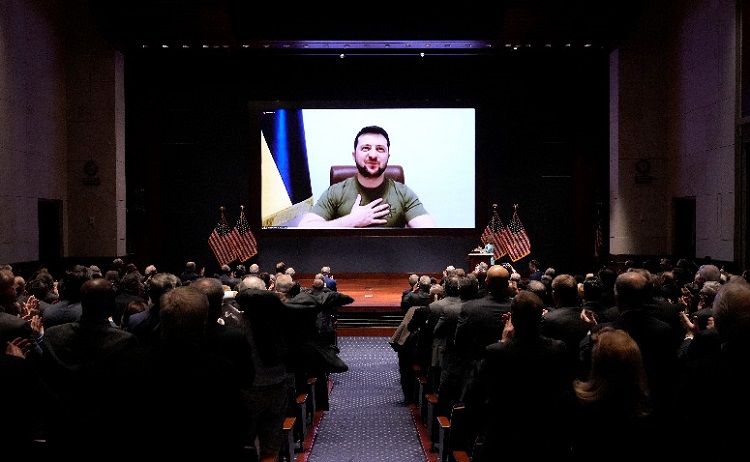 Americans have been consumed by the war in Ukraine with intensive media coverage across news platforms. This is unusual. Foreign affairs do not usually consume the American public unless the US is directly involved and American lives are at risk.

What explains this intense interest and what does it mean for a deeply polarised American political culture dealing with its own crisis of democracy? Some commentators read it as a symbolic moment of consensus in a divided nation. In the view of Fox News journalist Howard Kurtz,

the country is pretty unified on the Ukraine crisis, and the space between Republicans and Democrats has visibly narrowed … vast majorities in each party favour the ban on Russian oil and gas, even with the knowledge that it will boost prices here at home. That’s about as close to consensus as we ever come in this country.

This is an appealing analysis, given the deep divisions in the US. However, it is misleading. The broad public interest in the war is not producing a new consensus but mirroring the crisis in American democracy – albeit in a skewed fashion.

A war against democracy

The intensive coverage of the war in Ukraine has elevated particular frames reflecting American interests. By far the most prominent is that this is a war in defence of democracy – though this is often presented less as a geopolitical matter than as a dramatic spectacle of “a plucky country slaying a dictatorship”.

But the popularity of this framing does not constitute a consensus, as politicians and pundits seek to spin the meaning of the war in their own interests.

US president, Joe Biden, and his Democratic Party are keen to promote the war on democracy frame, hoping it will draw attention to what they view as threats to democratic institutions in the US. Undoubtedly, they further hope it will provide the president with a much-needed bounce in the polls at a time when his approval ratings hover at a dire 42% with challenging mid-term elections on the horizon.

Many conservatives bluntly repudiate attempts to associate threats to democracy in the US with the war in Ukraine. Others, further right and mostly allied with the previous president, Donald Trump, claim that the war reflects back on America to reveal the weakness of Biden’s leadership. Trump himself has championed Russia’s invasion of Ukraine as “genius” on Putin’s part.

There is also a counter-narrative from the left that has had some airing, but little mainstream traction – to argue that the intense interest in the war by Americans reflects a Eurocentric (or racist) attitude. They point to the overt bias of anchors and correspondents and the hypocrisy in sidestepping previously vaulted standards of independent journalism. There are many examples.

#UPDATE The US Congress gave President Volodymyr Zelensky of Ukraine a standing ovation Wednesday as he began an address to lawmakers on Russia's invasion of his country pic.twitter.com/Ucy47LxzKa

The war in Ukraine has become a Rorschach test of Americans’ perceptions of and anxieties about democracy. Neither liberal democracy at home, nor its global equivalent – a rules-based liberal world order – are as taken for granted as they once were.

For the broader public, following the war across media platforms, their intense interest represents a desire for moral clarity amid the disruptions and confusion of ethnocentric nationalism, populist politics and conspiracy theory roiling the public sphere.

Many Americans are seeing in this war a form of conflict that is much easier to grasp and engage with than the domestic civic fractures. It is a good war, a “David versus Goliath” conflict, with clear lines of good and evil. As such, it is also a distraction, for such moral clarity obscures as much as it reveals about domestic or international challenges to democracy.

And so Fox’s national security correspondent Jennifer Griffin can say to her audience, “If you look in [Vladimir Putin’s] eyes, you see someone who has gone completely mad”. As journalism, this is ridiculous – but it mimics the collective avoidance of disquieting realities.

End of the ‘end of history’

In the same broadcast, Griffin goes on to claim that Russia’s invasion represents “a moment in history … something we have not seen for generations”. This claim chimes with a common narrative among American journalists and pundits commenting on the war on Ukraine – that it represents a return of history, understood as great power aggression.

Such claims either directly or indirectly reference US political scientist Francis Fukuyama’s famous proclamation of “the end of history” – that the end of the cold war represented a globally defining triumph of free market liberal capitalism over communism.

A similar claim is made by former defense secretary Robert Gates, who writes that: “Putin’s invasion … has ended America’s 30-year holiday from history.” For Gates, and many other foreign policy alumni and experts in the US, the war should serve as a wake-up call and an opportunity to reconstitute a global Pax Americana.

Fukuyama himself has added to this chorus, seeing in the western surge of support for Ukraine a resurgent liberalism. “There’s a lot of pent-up idealism,” he writes. “The spirit of 1989 went to sleep, and now it’s being reawakened.”

What is remarkable about all this talk about the return of history is the amnesia it represents, conveniently forgetting that America’s military never took a holiday from history over the last 30 years – as the people of Iraq and Afghanistan can attest – and that America’s efforts to bring democracy to other parts of the world have been deadly and disastrous.

The apparent American consensus about the war in Ukraine is reducing that war to a spectacle of imperilled democracy that only further cements Americans collective amnesia about the failings of liberal democracy around the world. The reasons for America’s political decay at home and its relative decline abroad will not be found in the eyes of Vladimir Putin.