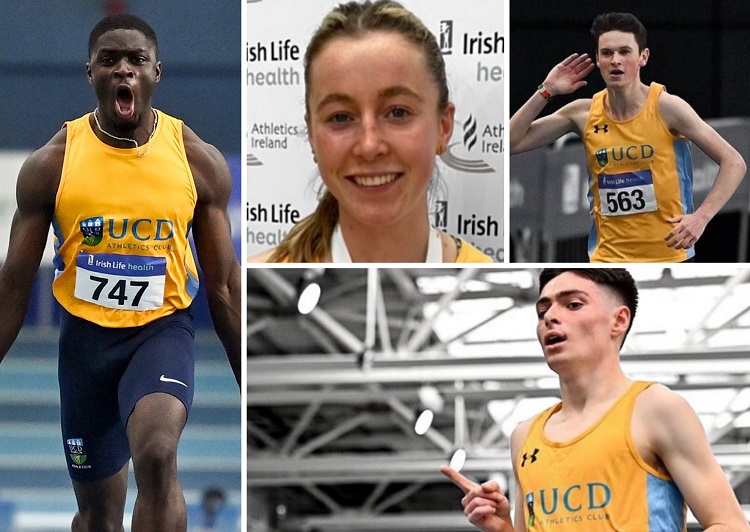 Fresh off her new 1500m record at the Birmingham Indoor Grand Prix, the Dublin middle-distance runner and UCD law student proven to be equally impressive in the 3000m at the Sport Ireland National Indoor Arena.

The 21-year-old's winning time of 8:53.67 secured her the first gold medal of the day at the competition, as well as a new Irish U23 indoor record.

A superb performance by Sarah Healy (UCD AC) running a National Indoor U23 3000m record and championship best performance of 8:53.67

We think this is worth mentioning again this morning!

Healy maintained a prominent position alongside fellow Olympian Michelle Finn throughout the race before upping the tempo with five laps to go. Her focus will now turn to next month’s World Indoor Championships in Belgrade.

“Indoors is a good chance to compete. You have to go in and be prepared for anything, not be scared of anyone. There’s a lot of women around the same level so I think anything is possible.”

The 21-year-old Cork athlete won in 8:02.84 - 2.99 seconds ahead of Griggs, in what was largely a pedestrian affair from the majority of the race.

In the final 1200m, McElhinney increased the tempo and managed to squeezed the strength and speed out of his 17-year-old rival.

An unbelievable performance from Israel Olatunde (UCD) who just ran a Mens 60m Championship Record of 6.62, a qualifying standard time for the @WorldAthletics Indoor Champs & only .01 off the Indoor National record #NationalSeniors @irishlifehealth pic.twitter.com/Kd0bm3YnK4

Grateful to get a championship record and PB of 6.62s and also qualify for the World Indoor Championships next month pic.twitter.com/0SCbd4OXlm

In the men's 60m, it took 6.62 seconds for Israel Olatunde to claim his first national indoor title – with the 19-year-old UCD Computer Science student coming in just 0.01 seconds outside the Irish record.

His blistering time ensures his qualification for the World Indoor Championships.

Like already has the qualification time for the World Indoors next month.

Engineering student Luke McCann also claimed a spot in Belgrade along with his first national indoor title at the National Indoor Championships, with a brilliant 3:45:14 performance in the 1500m.

It was almost a solo affair as the Ad Astra athlete comfortably lead from the gun, winning the race almost 10 seconds ahead of runner-up Louis O’Loughlin.