A scientist at UCD has led research into the development of a new method of observing how the early stages of DNA oxidation, which can lead to several forms of cancer, work at a fundamental level. The findings of the research will be used to inform and improve anti-cancer drug development.

Photo-dynamic therapy – an area of intense research activity – is a treatment strategy that uses light to activate a drug in a specific area of the body and can reduce the side effects observed in conventional anti-cancer treatments.

It is difficult to observe such fast processes in living cells, but the much simpler environment of a DNA crystal has enabled the researcher involved in the study to watch the initial crucial step in great detail.

The crystals contain a red ruthenium compound that is bound to a short piece of DNA. This type of compound is used in DNA sensing and is of interest to the pharmaceutical industry for cancer treatment. 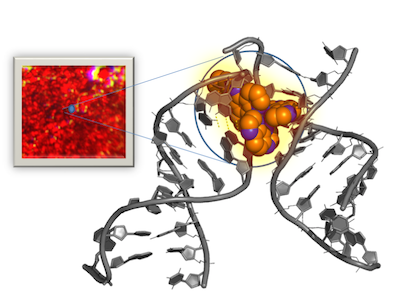 The structure of the DNA crystals observed by the research team led by Dr Susan Quinn, UCD School of Chemistry

Infrared radiation is used to look at the extremely fast process that occurs in a fraction of second when light is shone on the crystals, activating the compound, which results in it damaging the DNA.
The findings of the research have been published in the leading chemical journal Nature Chemistry.

Dr Susan Quinn from the School of Chemistry at University College Dublin is the lead author of the study.

“These results are very exciting as they demonstrate the ability to follow the flow of electrons from DNA to a molecule whose exact position is known, and this is an enormous advantage in the study of the early events that lead to DNA damage,” she said.

Dr Towrie, from STFC's Central Laser Facility, said: "Metal complexes that bind to DNA are now used in chemotherapies for cancer, or have potential activity against drug-resistant bacteria.

"Ruthenium complexes are of particular interest because they bind reversibly into the grooves of DNA, have a degree of DNA site selectivity and absorb light in the visible spectral region so might be applicable in photodynamic therapies.

"They have the added benefit that they have 'light switch' properties that tell you when they are attached to DNA in the cell because they become luminescent, which is useful as a biological probe for both living and inactive cell studies."

Professor Christine Cardin, from the University of Reading, is a nucleic acid crystallographer who led the UK team, including co-author Dr James Hall, who has received major funding from UK-based Biotechnology and Biological Sciences Research Council (BBSRC) in support of this work.

She said the research was an “excellent example” of multidisciplinary international collaboration.

“It also highlights the benefits of combining the facilities of Diamond Light Source, where all the crystallography has been carried out, with the equipment and expertise available in the adjacent Central Laser Facility of the STFC [Science and Technology Facilities Council].”

The Royal Irish Academy-Royal Society exchange programme, running since 2008, between Professors Cardin and Kelly, provided a key element of the funding for the collaboration.