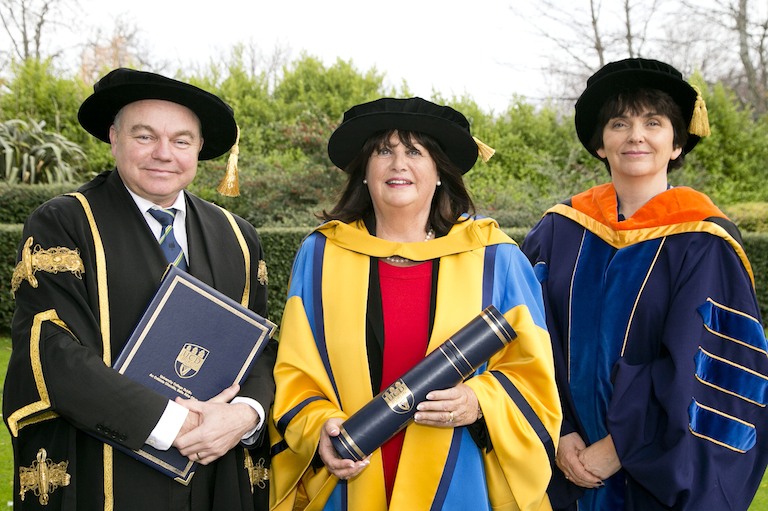 Máire Geoghegan-Quinn, who served as European Commissioner for Research, Innovation and Science from 2010 to 2014, has been awarded an honorary Degree of Doctor of Science by University College Dublin.

The award recognises "the transformational career of an Irish woman who, through action and example, has pioneered social change and driven innovation".

Her parliamentary career began in 1975 when she was elected as a member of Dáil Éireann for Fianna Fáil in the Galway Constituency. She remained in Dáil Éireann until 1997.

Máire became Ireland's first female cabinet minister since the foundation of the State when she was appointed Minister for the Gaeltacht in 1979 - she was still in her twenties at the time. She also served as Minister of state in the department of education in 1982.

In 1987, she was appointed Minister for European Affairs and served until 1991. During her time as Minister she chaired the inter-departmental committee on EU policy with responsibility for co-ordinating Ireland's EU Presidency in 1990. In 1992 she served as Minister for Tourism, Transport and Communications.

From 1993 to 1994, she served as Minister for Justice and was a member of the Irish Government team which negotiated the Joint Declaration of December 1993, by the British and Irish Governments, on Peace and Reconciliation in Ireland.

In 2010, she became the first Irish woman to serve as an EU Commissioner when she was assigned the portfolio of Research, Innovation and Science.

“She pioneered the development and delivery of Horizon 2020, the world’s largest public research funding programme,” said Professor Orla Feely, vice-president for research, innovation and impact at University College Dublin, who delivered the citation at the award ceremony.

"As a disciplined taker of notes, her archive will some day provide fascinating insights into public life in Ireland and Europe."