The results of an international study published in Nature Cell Biology have identified a gene (TMEM107) associated with Joubert syndrome and uncovered the mechanism by which it functions in cells, leading to a better understanding of the cause of the brain disorder.

Joubert syndrome is a rare genetic disease affecting one in 80,000 individuals. Symptoms include problems with mid-brain formation, breathing, balance and muscle control, as well as kidney defects, blindness, obesity, and bone malformation. 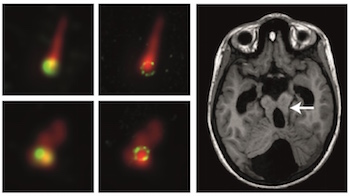 The syndrome is one of a number of increasingly common disorders called ‘ciliopathies’, caused by defects in a part of the cell called the cilium. This hair-like structure on the surface of most human cells functions as an ‘antenna’ for sensory perception (e.g., odour detection) and cell-cell communication during embryo development.

Recent research has focused on the base of the cilium, where it attaches to the cell. This part of the cilium is thought to act as a ‘gate’, controlling which molecules are allowed to enter and exit the cilium. By making sure that the cilium contains the correct molecules, the gate safeguards the normal functions of the cilium.

In pioneering experiments, the scientists used sophisticated (super-resolution) microscopy to establish that TMEM107 associates with discrete sub-regions of the gate, rather than the entire structure. This finding provides new insight into the architecture of the gate at the molecular level, and provides new leads for further understanding the mechanism by which the gate operates.

These observations were made not only in human cells, but also in tiny worms (C. elegans), indicating the general relevance of the findings in nature.

Pictured top: Conventional (left images) and super-resolution (middle images) pictures of ciliary gate proteins (stained green) at the base of cilia (stained red). Super-resolution pictures show that these proteins associate with sub-regions of the gate, appearing as individual 'dots' that arrange themselves into a hollow ring. Right image is a brain MRI from a patient with Joubert syndrome, showing a structural defect of the mid-brain called the 'molar tooth sign' (denoted by the arrow).

“This research expands our understanding of how the cilium gate is organised and has implications for understanding ‘gates’ in other parts of the cell,” said Dr Oliver Blacque, UCD School of Biomolecular and Biomedical Science, UCD Conway Institute and lead senior author.

“For patients with certain ciliopathies, it may be possible to design future intervention strategies to fine-tune the gate, and therefore alleviate some of the progressive symptoms. This work also demonstrates how research in relatively simple worms can uncover basic principles of biology and disease.”

“This work is a wonderful example of a multi-centre collaboration across research disciplines, stemming from our initial computational prediction that TMEM107 serves a function related to cilia,” said Professor Martijn Huynen, Radboud University Medical Centre and co-senior author of the study. “This work also shows the power of bioinformatics for disease gene discovery.”

“This study is another big step forward in our 10-year quest to identify the genes causing Joubert syndrome-associated disorders,” said Professor Christel Thauvin-Robinet, Burgundy University, and co-senior author of the study.

The study was funded by multiple grant agencies including the EU Framework 7 programme (Syscilia), Science Foundation Ireland and the French Ministry of Health.

The paper entitled ‘TMEM107 recruits ciliopathy proteins to subdomains of the ciliary transition zone and causes Joubert syndrome’ is available to download via http://dx.doi.org/10.1038/ncb3273.