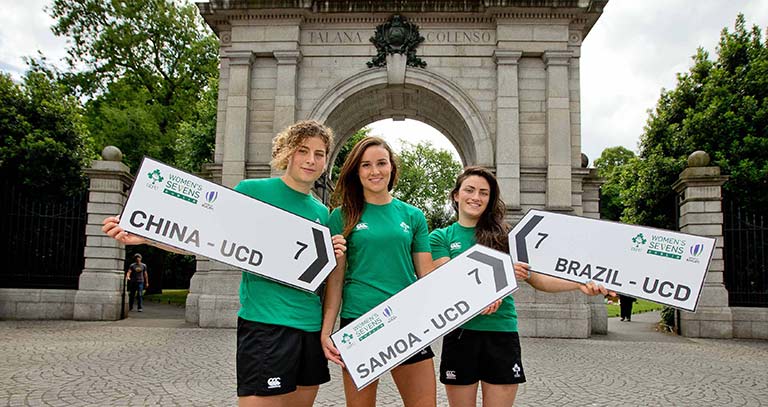 University College Dublin will host a major World Rugby Women's Sevens tournament for the first time, in what will be a tantalising prelude to the university's hosting of the pool stages of the Women's Rugby World Cup in 2017.

The sevens tournament, which will take place over the weekend of Saturday, August 22, and Sunday, August 23, is part of the World Rugby Women's Sevens Series qualifiers 2015.

The qualifiers will take place at the UCD Bowl, which has a capacity of up to 3,000. The university will host over 200 visiting players and their management teams.

Some 12 international teams will descend on the Belfield campus to take part in the competition, which will result in the top two teams qualifying for the 2015/16 World Rugby Women's Sevens Series.
Hosts Ireland will play an improving South Africa, Hong Kong and Mexico in Pool C. China will be hoping to maintain their place on the series when they take on the Netherlands, Kenya and Colombia, who have already qualified for the Olympics, in Pool B.

Olympic-qualified Brazil will take on Wales, Japan and Samoa in Pool A.

The action gets underway at 11.30am on Saturday, August 22, when China faces Kenya at the UCD Bowl.

The sevens qualifiers will provide a mouthwatering glimpse of what's to come for women's rugby fans, as UCD is due to host the pool stages of the Women's Rugby World Cup 2017, which is a significant boost to the sport in Ireland.

Garrett Tubridy, Tournament Director for the Women's Rugby World Cup (WRWC), which will take place in UCD and in Belfast in 2017, said the UCD grounds and campus were the ideal venue for the sevens series.

"The UCD Bowl and the campus are great for us. Everything is so closely connected – if they [players] need to do recovery they have got the pool right beside them for injured players or players who require extra physio or anything else. You have got the gyms there as well, so the bowl really works well for us in that context.

"The campus atmosphere is also by its nature relaxed. It's a great atmosphere and a great environment for them [the teams] to be in."

Mr Tubridy said that apart from the rugby, cultural ambassadors from some of the participating countries will create a "family-friendly atmosphere" by showcasing their home countries' culture and music during the qualifier series.

"There will be flags and face painting, so there will be a lot of activities going around and because you have 12 countries speaking 10 different languages, it's going to be a lovely atmosphere."

"The Japanese are bringing traditional Taiko drummers down and, in fact, a UCD staff member from Japan, Nobuko Iljichi, will be involved in this."

Tickets for the qualifiers, which start at €5 per adult, children are free, are available on ticketmaster.ie