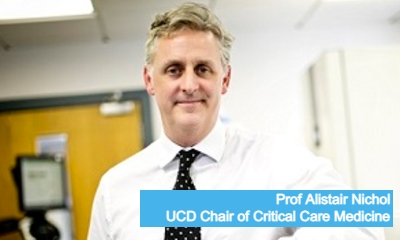 An international clinical trial involving critical care patients in 14 countries will lead to significant changes in the guidelines for the care of unconscious cardiac arrest patients. The practice of cooling the body temperature down to 33 degrees Celsius, which has been standard since 2005, has been shown not to improve survival over strict maintenance of normal temperature.

The TTM2 (Targeted Temperature Management) study, led by Lund University and Region Skåne in Sweden, has been published today in the New England Journal of Medicine.

Dr Niklas Nielsen, a researcher at Lund University and consultant in anaesthesiology and intensive care at Helsingborg Hospital, who led the large-scale international randomised trial said the results “will affect the current guidelines,” which will also reduce the cost and staffing burden in ICUs.

Professor Alistair Nichol, Chair of Critical Care Medicine at UCD School of Medicine, Director of the Health Research Board-funded Irish Critical Care Clinical Trials Network (ICC-CTN) and Consultant in St Vincent’s University Hospital, contributed to the study from Ireland. He said: “This finding that the induction of hypothermia with its known side effects for over 24 hours is not superior to avoidance of high temperatures after cardiac arrest, is important to bedside clinicians. This will allow us to maintain the high levels of survival and neurological recovery in these patients, without any of the side effects of hypothermia.

“This finding demonstrates that we should not be routinely using hypothermia to prevent brain injury and improve outcome after cardiac arrest.”

In the early 2000s, two studies in the New England Journal of Medicine showed that induced hypothermia in unconscious cardiac arrest patients greatly improved patient survival. The studies changed existing treatment practices, and led to the introduction of new guidelines around the world. However, the evidence for the guidelines was considered by many to be weak. As a result, a large international randomised clinical trial was initiated, and led by researchers at Lund University and Helsingborg Hospital.

TTM2 (which follows its predecessor in 2013) is linked to and shares data with the ongoing ‘Targeted Therapeutic Mild Hypercapnia After Resuscitated Cardiac Arrest’ (TAME) study, which examines the ability of higher arterial carbon dioxide (PaCO2) levels to reduce brain damage, comparing giving patients 'normal' to 'slightly higher than normal' blood PaCO2 levels and assessing their ability to return to normal life-tasks. Spanning New Zealand, Australia, the US and Ireland (led here by Professor Nichol and ICC-CTN, funded by the HRB), it is the largest trial ever conducted in heart attack patients in the intensive care unit.

TTM2 also follows on from the POLAR Randomized Clinical Trial in 2017, which was published in JAMA in 2018, co-authored by UCD’s Professor Nichol.

Researchers followed up on survival rates for patients six months after receiving care for cardiac arrest. They also investigated how functionality in everyday life was affected in the surviving patients.

1850 patients were included in the survival analysis*. Six months after the patients suffered the cardiac arrest, a total of 465 of 925 participants in the group who were induced with hypothermia had died, approximately 50%. In the normothermia group, 446 out of 925 had died, corresponding to 48%. Researchers saw a slightly increased risk of impact on blood circulation, cardiac arrhythmia, in the group treated with hypothermia.

1747 patients were included in the analysis of patients’ ability to function in everyday life (functional status). In the group treated with hypothermia, 488 of 881 (55%) either died or had a severe functional impairment 6 months later, which can be compared to 479 of 866 (55%) in the normothermia group.

Professor Nichol said: “The results are important, but not unexpected. For 20 years we have applied and believed in these practices which we now see do not make a difference for survival. Prof Nichol demonstrated in 2019, that strict avoidance of high temperatures as opposed to the use of hypothermia, was associated with the same proportion of good outcomes after traumatic brain injury, another form of brain injury. Now we can use the resources on other things, and prioritise other aspects of the acute phase of cardiac arrest.”

Researchers now plan to further analyse patient data to learn more about who is affected, and about recovery after cardiac arrest.