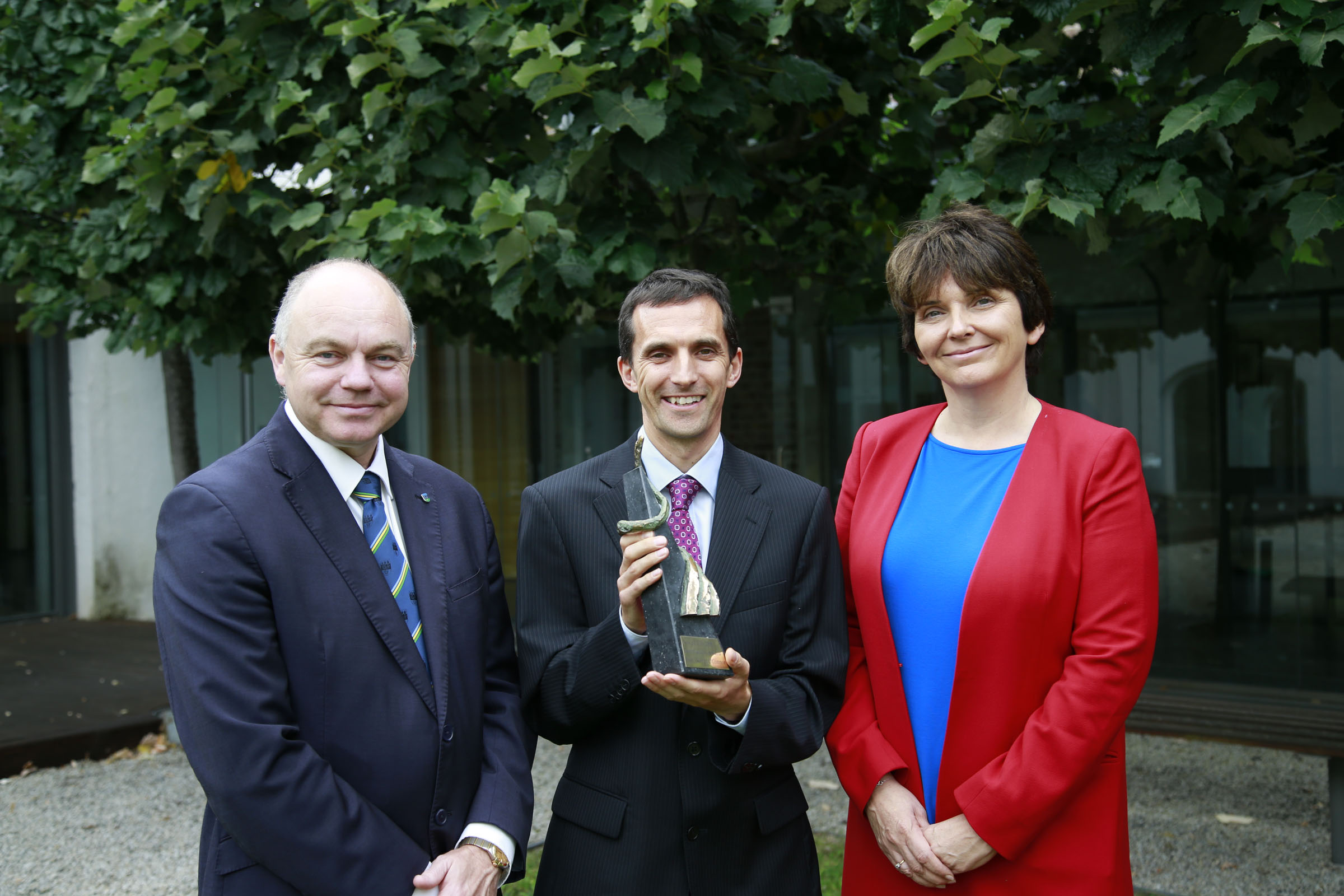 UCD President, Professor Andrew J. Deeks presented the award to Professor O’Connor, a professor at the UCD School of Biomolecular and Biomedical Science and a principal investigator at the UCD Earth Institute.

Professor O’Connor’s interests include research into the development of biodegradable polymers and methods of improving the recycling of plastic and other materials.

His expertise includes areas such as the bioeconomy, environmental technology, bioprocessing, protein engineering and biocatalysis – the use of natural substances to speed up chemical reactions.

Professor Deeks said he was presenting the award to Professor O’Connor “in recognition of the quality and impact of his peer-reviewed research and his technological developments for the production of bio-based products”.

He also said the award recognised Professor O’Connor’s “successes in the commercialisation of the intellectual property arising from his research at the University”.

Professor O’Connor is also the co-founder and CEO of Bioplastech, a UCD spin-out company that he established in 2009 with Dr Ramesh Babu, from Trinity College Dublin and Italian entrepreneur, Enrico Altieri.

The firm has developed a number of adhesive products based on its biodegradable polymers and is currently testing these with several international adhesive companies.

“The award recognises the huge effort, commitment and intellect of the current and past researchers and students in my research lab in UCD and in Bioplastech to develop and commercialise our technologies,” said Professor O’Connor after he received the award.

He said that Bioplastech is currently raising external funding over the next six months to enable it to build a demonstration facility to produce adhesive products.

Professor O’Connor, who has already secured over €16 million in research funding, is the lead principal investigator in the UCD Biocatalysis Group.

The group is focused on the synthesis of biodegradable polymers, as well as small bioactive molecules. It also investigates the ability of bacteria and their enzymes to convert waste or inexpensive starting materials into value-added products.

Professor O’Connor is also a funded investigator with AMBER, the Advanced Materials and Bioengineering Research Centre and the Dairy Processing Technology Centre.

Internationally, he and his UCD research team are part of a pan-European research consortium that has secured €7.6 million in European Union Horizon 2020 funding for a five-year project called P4SB.

This project aims to propel the sustainable production of new biopolymers from waste plastic. It also seeks to establish a platform that increases biopolymer production efficiency through the use of synthetic biology and bacteria fermentation.

The NovaUCD Innovation Award was established in 2004 to highlight University College Dublin’s commitment to innovation.

The award is presented annually to an individual, company or organisation or group in recognition of excellence in innovation or of success achieved in the commercialisation of UCD research or other intellectual activity.