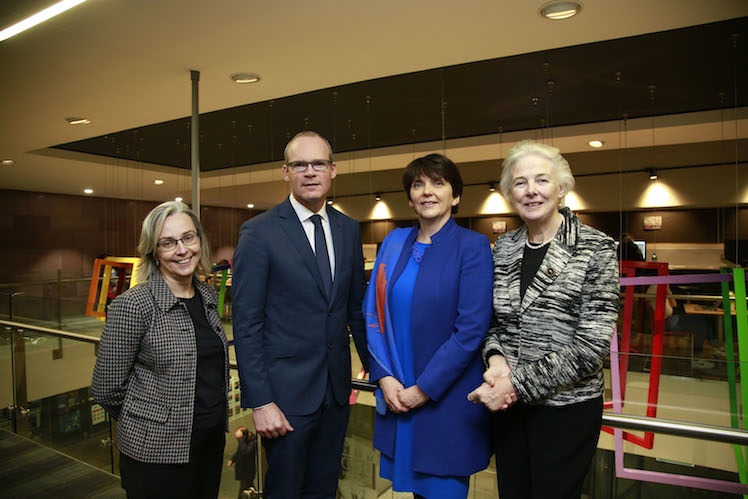 Simon Coveney TD, Minister for Foreign Affairs and Trade has outlined his vision for the future of Europe during a keynote address at University College Dublin, entitled ‘The Europe We Want’.

The address delivered at the UCD Sutherland School of Law forms part of the recently launched Citizens Dialogue in Ireland on the Future of Europe.

During his keynote speech, delivered at UCD, Minister Coveney said that the European Union had never “stood still”. Instead, it had continuously evolved from its beginnings as a peace project in the aftermath of the Second World War to eventually adopt a common and security policy, and, more recently, a single currency.

He said there was going to be a ‘Brexit gap’ in the EU’s budget after the UK's departure from the EU. This funding gap would be in the region of €12 to €15 billion per annum.

He outlined two ideas that could give the EU much needed “momentum” at a time when Brexit is posing significant challenges to the Union.

One of these ideas is the completion of the internal market for services, which he proposed should be finalised by 2022.

He said that by “shining a light” on protectionism and removing the remaining barriers to the freedom of movement of services across Europe, the completion of the internal market for services would boost jobs and growth in Ireland and across the EU. This would also add €300bn to the Union’s GDP.

“In the 1990s, efforts to complete the internal market in goods coincided with a period of unprecedented growth,” he said. “Putting the same effort into completing the market in services will give Europe the momentum it needs.”

He also proposed that the EU set itself a new goal: “to have a foreign policy that is as effective and ambitious as its international trade policy”.

He said the EU needs to find its voice and become the diplomatic super-power it should be.

“We must work harder to do what we have already said we would do, namely to promote a rules-based global order with multilateralism as its key principle and the United Nations at its core,” he said.

“The case for this was made eloquently in the Global Strategy when it argued that: “A rules-based global order unlocks the full potential of a prosperous Union with open economies and deep global connections, and embeds democratic values within the international system.”

Minister Coveney said he recognised that the majority of Irish people wanted to maintain the country’s long-held policy of neutrality. But he stated a preference for closer defence and security cooperation with our European allies in the face of extremist terror and cyberattacks.

He acknowledged that the third-level student exchange programme Erasmus had been a success. He also said that the Horizon 2020 programme had helped to foster European-wide partnerships and excellence in academic and scientific research.

“Our aim must be to agree a financial framework that allows for investment in areas that yield real added value and serve European interests overall,” he added.

Speaking at the event Professor Orla Feely, UCD Vice-President for Research, Innovation and Impact, said UCD was strongly committed to influencing the future development of the European Research Area through the Ninth Framework Programme.

“Participation in the current Framework Programme, Horizon 2020, has been essential in driving the research mission of UCD,” she said.

“At UCD we are focused on mission-based research to address grand challenges affecting Europe and the wider world. In this regard UCD endorses the alignment of European research priorities with the UN Sustainable Development Goals which will facilitate development of appropriate metrics to measure impact on all dimensions of sustainable development, including human development.”

Catherine Day, who joined the European Commission in 1979 and who was Secretary-General of the Commission from 2005 to 2015 moderated the event.

She graduated with a BA in economics and an MA in International Trade and Economic Integration from UCD and received an honorary Doctorate in Law from the University in 2004. In 2015 the UCD Foundation Day Medal has been awarded to her in recognition for her outstanding impact on the European Union.

Until May 9, 2018 (Europe Day) the government plans to hold a series of public and sectoral and regional meetings, hearing the views in person and online of members of the public and representative organisations.

The intention is that the views expressed on Europe will provide an input into the Irish government’s contribution to the broader future of Europe debate.

Minister Coveney’s full address is available to read on the Department of Foreign Affairs website.