Gerry Byrne, Professor of Mechanical Engineering at University College Dublin, has been presented with the Fraunhofer Thaler Award in recognition of his “outstanding leadership and significant achievements in the field of applied research”.

Professor Byrne, UCD School of Mechanical and Materials Engineering, is the first Irish person to receive the Fraunhofer Thaler Award. 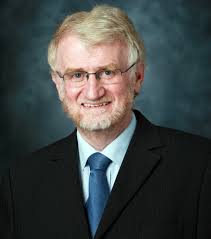 Established in 1949, the Fraunhofer-Gesellschaft's research activities are conducted by 69 institutes and research units at locations throughout Germany. It employs a staff of 24,500 and has an annual research budget of around €2.1bn.

Pictured: Professor Gerry Byrne, UCD School of Mechanical and Materials Engineering who was awarded with the Fraunhofer Thaler Award by the Fraunhofer-Gesellschaft

Professor Neugebauer referred to the excellence of Professor Byrne’s long-term contribution to the society through activities such as his Presidency of the International Academy for Production Engineering (CIRP).

He noted Professor Byrne’s work in support of the development of the Fraunhofer-Gesellschaft in the UK and Ireland.

He also thanked him for his background work in facilitating the establishment of the Fraunhofer Project Centre for Embedded Bioanalytical Systems at Dublin City University.

This is the first centre of its kind in Ireland and is supported by Science Foundation Ireland (SFI) and the Fraunhofer-Gesellschaft in Germany.

Congrats to Prof Gerry Byrne of @UCDEngArch, who was yesterday presented with the Fraunhofer-Taler by the President of the Fraunhofer Inst. pic.twitter.com/bLogFqaAeU

He established his own company, GB Innovation Ltd in 2014. The firm provides a managed service to European Industries and organisations in the area of applied research, development and innovation.