Fujitsu, the Insight Centre for Data Analytics and Systems Biology Ireland at University College Dublin have joined forces to develop an automated system for predicting biochemical reactions that are involved in causing diseases such as cancer.

The new automated engine will provide scientists with a powerful tool for discovering the next generation of drugs to target these reactions by enabling them to conduct more precise, computation-guided experiments.

Recent biomedical research shows that many serious diseases, in particular cancer, are caused by persistent disruptions of cellular communication processes. 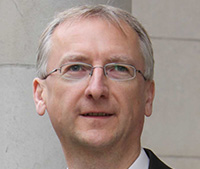 The processes use a biochemical reaction called phosphorylation to control the information flow.

Pictured: Professor Walter Kolch, UCD School of Medicine and Director, Systems Biology Ireland, which has joined forces with Fujitsu and the Insight Centre for Data Analytics to develop an automated system for predicting reactions that are involved in causing diseases such as cancer; and below, a graphic of intracellular communication networks using phosphorylation to process information

These biochemical reactions are faulty in cancer, and drugs that block rogue phosphorylation reactions have proven to be effective cancer treatments.

Despite half a century of intense research, the discovery of these critical phosphorylation reactions is still slow due to the extensive manual effort required.

Scientists are now hoping that they will be able to make much more accurate predictions of previously unknown phosphorylation by using this new automated engine.

They are also confident that this will lead to substantially increased rates of discoveries in cellular computing which can, in turn, deliver the targets for more efficient cancer drugs. 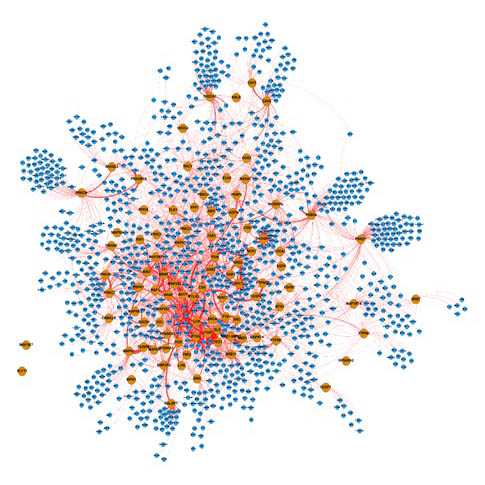 Fujitsu Laboratories Ltd, Fujitsu Ireland and Insight Centre for Data Analytics at NUI Galway have worked since 2015 on TOMOE, a novel discovery informatics platform based on knowledge graphs and statistical relational learning.

Statistical relational learning is a subdiscipline of artificial intelligence and machine learning that is concerned with domain models that exhibit both uncertainty and complex, relational structure.

The team has applied the automated discovery technology to the use case of phosphorylation prediction.

“This work with Fujitsu is an exciting glimpse into the future of drug target discovery in which computational modelling will shortcut a laborious experimental process,” said Professor Walter Kolch, Director, Systems Biology Ireland, University College Dublin.

As of March 2017, the team has finished working on the first functioning prototype of the prediction engine.

The prototype is currently being tested on a comprehensive knowledge graph covering known phosphorylation reactions and related protein interactions in humans that are available in machine-readable format.

Further implementation details and preliminary results will be released later this year.