Irish people who eat a lot of cheese do not have higher cholesterol levels than those who don’t, according to research carried out at University College Dublin.

Current health guidelines recommend that certain factors such as eating foods high in saturated fats like cheese can increase your risk of developing high blood cholesterol.

High blood LDL cholesterol is one of the main risk factors for heart disease and stroke. Some 10,000 people in Ireland die from the diseases every year. 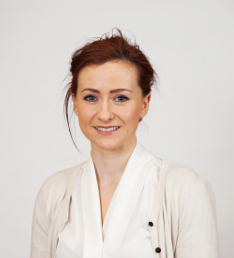 The analysis was conducted by academics at Food for Health Ireland, which is hosted at UCD. The research paper was published in the journal Nutrition and Diabetes.

Scientists examined the impact of dairy foods – milk, cheese, yoghurt, cream and butter – on markers of body fatness and health in 1,500 Irish people aged between 18 and 90 years of age.

Pictured: Dr Emma Feeney, UCD School of Agriculture and Food Science and Food for Health Ireland, who led the research on the study that shows that eating large amounts of cheese does not raise LDL cholesterol levels

An analysis of individual dairy foods found that cheese consumption was not associated with increased body fat or with LDL cholesterol.

This echoes recent research from other countries that demonstrates that the saturated fat from cheese, does not adversely impact blood cholesterol profiles due to the unique set of nutrients it contains.

“What we saw was that in the high consumers [of cheese] they had a significantly higher intake of saturated fat than the non-consumers and the low consumers and yet there was no difference in their LDL Cholesterol levels,” said Dr Emma Feeney, UCD School of Agriculture and Food Science and Food for Health Ireland, who was lead author on the paper.

“We have to consider not just the nutrients themselves but also the matrix in which we are eating them in and what the overall dietary pattern is, so not just about the food then, but the pattern of other foods we eat with them as well.”

LDL Cholesterol is a substance found in blood which helps the body to function properly at healthy levels. However, when there is too much LDL cholesterol in a person’s blood it sticks to the walls of arteries blocking blood flow, potentially leading to heart disease and heart attacks.

When examining dietary patterns, they discovered that people who regularly consumed low-fat milk and yoghurt tended to have higher intakes of carbohydrates.

They were also surprised to find that people in the 'low-fat' dietary pattern group had greater LDL-cholesterol levels.

The paper is entitled ‘Patterns of dairy food intake, body composition and markers of metabolic health in Ireland: results from the National Adult Nutrition Survey’.