International teams of researchers, including astronomers from the Space Science Group in the UCD School of Physics, University College Dublin, have announced the discovery of light - electromagnetic radiation - associated with a gravitational wave source.

The Advanced LIGO and Advanced VIRGO teams have reported the detection of a gravitational wave source (GW170817), consistent with the merger of two neutron stars, for the first time. Gamma-rays, followed by optical and infrared radiation, were also detected from the same region of the sky.

Gravitational waves, ripples in the fabric of spacetime, were first anticipated by Albert Einstein a century ago in his general theory of relativity. 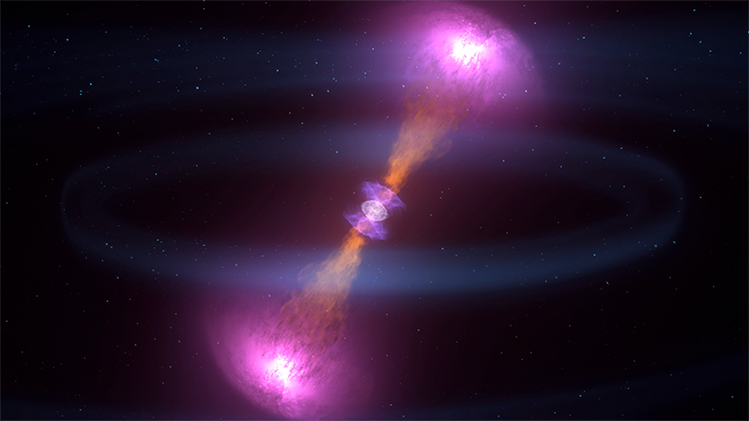 Additional still from animation. As neutron stars collide, some of the debris blasts away in particle jets moving at nearly the speed of light, producing a brief burst of gamma rays. Credit: NASA's Goddard Space Flight Center/CI Lab

This theory predicts that the presence of a mass causes a curvature in spacetime and that when massive objects, such as black holes, merge, this curvature can be altered, sending ripples, or gravitational waves, out across the Universe. By the time these ripples reach Earth, they are however almost imperceptible.

In September 2015, gravitational waves were observed for the first time after scientists from over 20 countries collaborated to develop a detector, the Advanced Laser Interferometer Gravitational Wave Observatory (aLIGO), located in the USA, that was sensitive enough to confirm their existence. The 2017 Nobel Prize in Physics was   recently awarded to Kip Thorne, Barry Barish and Rainer Weiss for this discovery.

Since the first gravitational wave detection, caused by a collision between two black holes 1.3 billion years ago, aLIGO, in conjunction with the Advanced VIRGO (aVIRGO) detector, located in Pisa, Italy, has observed gravitational waves from several other sources.

In all cases up to now, the  gravitational waves  detected were from the merger of black holes about 30 times the mass of our Sun and, despite searches by astronomers, no counterparts were found by telescopes sensitive to gamma-rays, X-rays, optical, infra-red or radio waves.

On August 17, 2017 gravitational waves from the merger of two compact stellar remnants, called neutron stars, were detected by two out of three aLIGO/aVIRGO systems.

Less than 2 seconds later, gamma-rays were detected from the same region of the sky by NASA’s Fermi Gamma-ray Space Telescope and ESA’s INTEGRAL satellite. Both satellites detected a gamma-ray burst, which proves that some gamma-ray bursts are caused by the merger of neutron stars.

Neutron stars are the ultra-dense remnants that massive stars can produce at the end of their lives, and if such stars merge, can produce gravitational waves and gamma-rays, such as those observed by aLIGO/VIRGO, Fermi and INTEGRAL respectively.

Details of the neutron star merger, its association with the gamma-ray burst, and the physical implications of this association, were published today in four papers by the aLIGO/VIRGO, Fermi and INTEGRAL teams in Astrophysical Journal Letters. 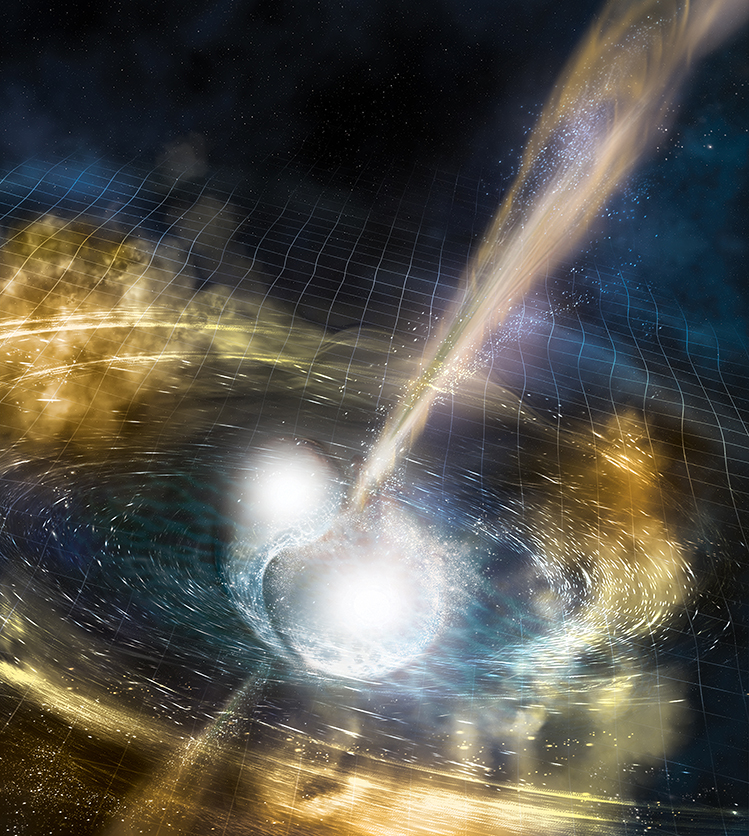 Illustration of two merging neutron stars. The rippling space-time grid represents gravitational waves that travel out from the collision, while the narrow beams show the burst of gamma rays that are shot out just seconds after the gravitational waves. Swirling clouds of material ejected from the merging stars are also depicted—these clouds glow with visible and other wavelengths of light. ‌Credit: National Science Foundation/LIGO/Sonoma State University/A. Simonnet

In addition, these discoveries sparked an unprecedented follow-up observational campaign using telescopes on the ground and in space, involving over 3,500 scientists on six continents. The goal of this campaign was to establish if there was any sign of the merger event at other wavelengths.

In a Nature paper published on the same day, a team led by Professor Stephen Smartt, Queen’s University Belfast, announced the discovery of the first visible and infrared light associated with the new gravitational wave source detected on August 17, 2017.

This observation is of immense significance to astrophysics and may allow scientists to explain the unknown origin of some of the heavy metals found on Earth.

When first observed at optical wavelengths, this new astronomical transient, was around 100 million times more luminous than the Sun, albeit located at a distance of 130 million light years from Earth. However, the transient faded rapidly, and in a matter of weeks could no longer be detected by even the largest telescopes on Earth.

This data was obtained as part of the ePESSTO project - a Europe-wide collaboration of scientists, including University College Dublin scientists, working on astronomical transients.

Using the ESO data, astronomers, including Dr Fraser, were able to show that the transient’s behaviour matched theoretical models of a ‘kilonova’, a rare type of event that results from the merger of two neutron stars.

"Since the first discovery of gravitational waves 2-years ago, astronomers have been working hard to find their counterparts at optical wavelengths,” said Dr Morgan Fraser.

“Now with [this] announcement we are seeing the dawn of a new field of ‘multimessenger astronomy’, where detections of transients across the electromagnetic spectrum, along with gravitational waves, are opening up a whole new window on the Universe."

“The data from ESO telescopes also allowed the team to identify possible signatures of Cesium and Tellurium in the debris of the remains after the neutron stars merged. Finding these elements has been a crucial discovery in understanding the source of the heavy elements in the Universe,” he explained.

“We can now say, with some confidence, that Cesium and Tellurium on Earth, which are for example used in atomic clocks, electronics and solar panels, would have been produced in a merger of two neutron stars in our own galaxy, more than 4.5 billion years ago.”

Associate Professor Sheila McBreen, UCD School of Physics, a Fermi Gamma-ray Burst Monitor team member and co-author on three papers published today in the Astrophysical Journal Letters, focused on the gamma-ray observations made by the Fermi satellite said, “The detection of a short gamma-ray burst associated with a binary neutron star merger is a major step forward and the beginning of an entirely new era in astronomy.” 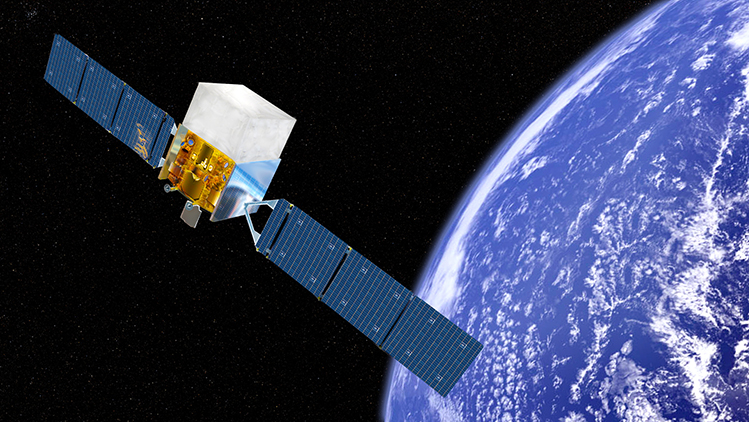 “It has long been inferred that short gamma-ray bursts are the result of the merger of compact objects/stars but it could only be proven by an association with a gravitational wave source. The results published today are a result of long term vision and a sustained investment in fundamental research internationally.”

Professor Lorraine Hanlon, UCD School of Physics, and co-author on a paper published today in Astrophysical Journal Letters and a Nature paper focused on the independent detection of gamma-rays from GW170817 by the INTEGRAL satellite, said, “Maintaining access to the gamma-ray sky with more sensitive facilities will be essential to progress the emerging field of multi-messenger astrophysics that has been revealed by these stunning discoveries announced today.

“These discoveries give momentum to the case for supporting Irish astronomers’ participation in international consortia that operate at the frontier of fundamental research, on a scale that cannot be achieved by any single institute or country.”

Dr Antonio Martin-Carrillo, UCD School of Physics, and co-author on the papers published today in Astrophysical Journal Letters and Nature contributing to the detection of GW170817 in visual light and gamma-rays, said, “Over the last 30 years or so, we have been studying gamma-ray bursts trying to understand their nature and origin. However, by the time we see a gamma-ray burst whatever created it is gone.”

“The association of the gravitational event GW170817 with a short gamma-ray burst, gives us the possibility, for the first time, of studying the properties of the progenitor of gamma-ray bursts. This discovery allows us to start putting to test gamma-ray burst theories and improve our understanding of these extremely powerful events.”

Three scientists from the Dublin Institute of Advanced Studies (DIAS) School of Cosmic Physics were part of the worldwide team of more than 4,500 scientists involved in the discovery: Professor Felix Aharonian, Professor Luke Drury and Dr Carlo Romoli. 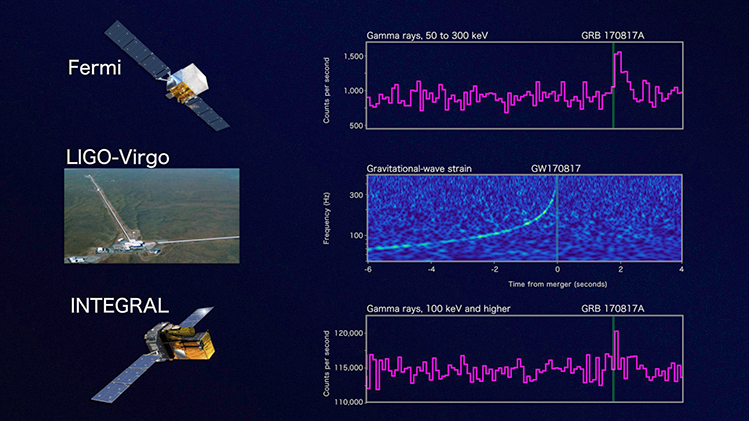 Details of the scientific journal articles: