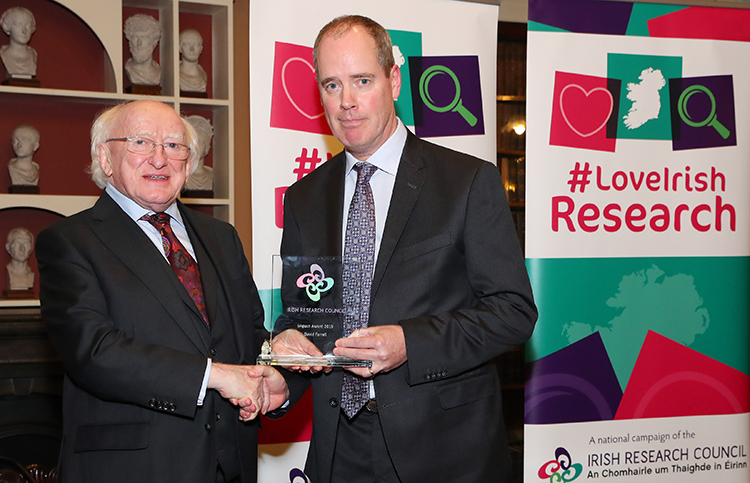 In recognition of his distinguished career, Professor David Farrell has received the ‘Impact Award’ at the 2019 Researcher of the Year awards.

The academic, from the UCD School of Politics and International Relations, was honoured by the Irish Research Council (IRC) for his significant contributions to research on electoral systems and the politics of representation in democracies.

Now in its third year, the Research of the Year Awards commend the very best of current IRC awardees or alumni working in academia, industry, civic society or the public sector.

President of Ireland Michael D Higgins was guest of honour at the event and presented the awards to the winners.

Each year an ‘Impact Award’ is presented to an awardee of the Council who is seen to be making a highly significant impact outside of academia.

Recently Professor Farrell and Dr Jane Suiter, from Dublin City University, were named as the 2019 recipients of the Brown Democracy Medal – a honour given by the McCourtney Institute for Democracy at Penn State University to the best projects being done to advance democracy across the globe.

In 2013, Professor Farrell was made a member of the Royal Irish Academy, in recognition of the quality of his world-class research.

Thanks to @IrishResearch for a great awards ceremony showcasing the outstanding talent supported by the Council. Congratulations to all award winners, including @ucddublin colleagues Kathleen Lynch and @dfarrell_ucd. pic.twitter.com/ovw0vMHsZP

Speaking after the awards, Vice-President for Research Innovation and Impact Professor Orla Feely added: “I am delighted to see this recognition for Professor David Farrell’s outstanding career and for the impact of his work on the politics of representation in democracies.

“David has made distinguished contributions in areas of electoral systems, party politics, representative politics in the European Parliament, and deliberative democracy.  His work has had transformative impact, and his expertise is widely sought after around the world.”

President Higgins has made research and education one of the key themes of his presidency, championing the importance of cultivating independent thought and academic freedom.

In recognition of this, the Irish Research Council made a special award to UCD Professor Emeritus Kathleen Lynch for her contribution over many decades to equality and participation. 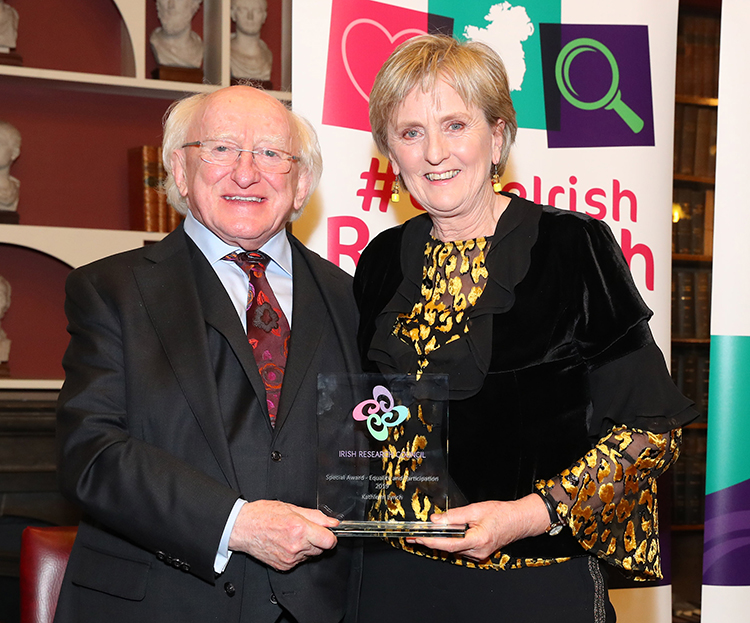 Peter Brown, Director of the Irish Research Council, said: “We are particularly pleased to honour the contribution of Professor Kathleen Lynch in the area of equality and participation, a theme which President Higgins has passionately promoted during his time as President of Ireland.”

Congratulating the 2019 awardees, Chair of the Irish Research Council, Professor Jane Ohlmeyer said: “[Their] work demonstrates the breadth of excellent research that is being carried out in Ireland – the impact of which ripples through multiple aspects of Irish life.”