UCD mathematician inducted into Norwegian Academy of Sciences and Letters 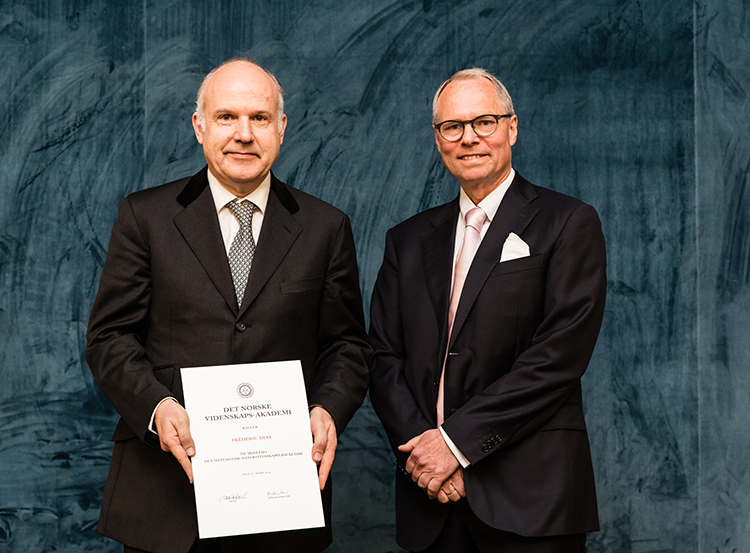 Professor Frederic Dias has been elected a foreign member of the Norwegian Academy of Science and Letters.

A faculty member at the UCD School of Mathematics and Statistics, the mathematician formally joined the 162-year-old society at a ceremony held in Oslo in March.

The Academy is the most well-known academic society in Norway and serves to support advancement of science and scholarship both nationally and internationally.

“It is a great honour to be inducted into the Norwegian Academy of Science and Letters. It is a recognition of the significant work done within my research group over many years," said Professor Dias.

“In a constantly evolving world to be able to work collaboratively with other academies to shape policies for the benefit of society is a tremendous privilege and will give me great satisfaction.”

Founded in 1857, the Norwegian Academy is responsible for awarding the Abel Prize in Mathematics, widely regarded as the most prestigious award in its field.

Through the Abel Prize and the Kavli Prize (in Astrophysics, Nanoscience and Neuroscience), the society has gained significant international attention.

Membership of the Norwegian Academy of Science and Letters is limited, as the society only inducts new members into its 410-strong assembly as current members pass away or turn 70.

Members over 70 years-of-age keep all their rights and are still considered full members.

The Academy has 250 seats for Norwegian members and 160 seats for foreign members.

Only members of the society are entitled to propose candidates for membership, which is based solely on the candidates' scientific achievements.

Professor Frederic Dias is one of only three researchers in Ireland to ever be awarded a second European Research Council Advanced Grant.